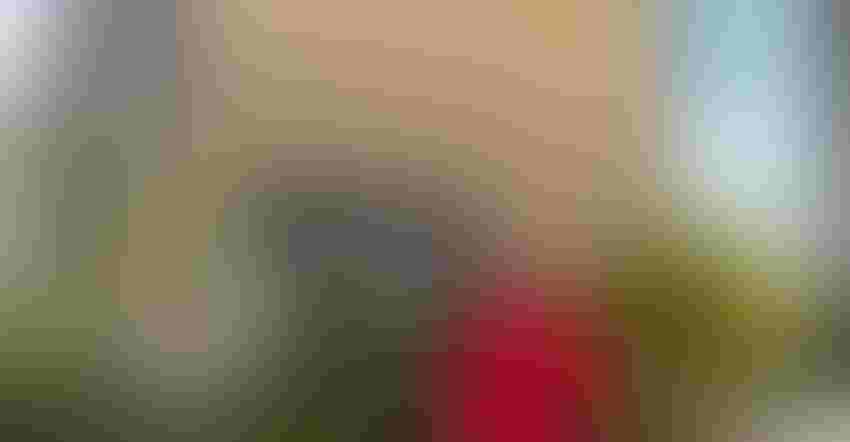 Rolston St. Hilaire was named dean of the Jordan College of Agricultural Sciences and Technology at Fresno State as the new school year began. He is sharing his ambitious plans to elevate the university’s standing as a premiere agricultural college through meetings with local agriculture leaders and campus staff.Todd Fitchette

Fresno State’s newest college dean was just 30 days on the job when he made the rounds to the local Farm Bureau and an international ag technology event that capped its three-day meeting with a robot demonstration on the university farm.

Rolston St. Hilaire was named dean of the Jordan College of Agricultural Sciences and Technology at Fresno State University shortly after the new school year began for students. He came to Fresno State from New Mexico State University, where he spent over two decades in various capacities; most recently he was the chair of the Land Grant’s Extension department.

“We have a strong brand with the Jordan College, and I want to work with the institution to ensure that Jordan College is elevated at that national and international level,” he said to the Fresno County Farm Bureau’s board of directors in late October.

He spoke with Western Farm Press at the close of the FIRA USA event in Fresno, which reported an international attendance of nearly 1,000 people – the largest event in the world dedicated solely to agricultural technology in 2022.

To encourage enrollment in and donations to the various agricultural programs on campus, the university will embark on a branding campaign to promote the Jordan College. Part of that effort will include training and enticing faculty and staff to continue building upon alliances that exist within the community and Central Valley, he said.

“One of the plans I have to foment that collaboration is to get our faculty out in a scripted and deliberate way to some of the area industries and simply meet with the managers,” he said. “I have found that most of them already have Fresno State roots. We will use those natural alliances as much as possible and will put some resources behind that.”

Through those industry collaborations, Fresno State has been able to build two processing labs. Donations from Bee Sweet Citrus allowed Jordan College to build a citrus processing lab on campus. Separate donations by various tree nut industry companies likewise allowed a nut processing lab to be built. In both cases, students have access to practical tools to help them learn about food processing.

St. Hilaire pointed to a similar program with Foster Farms poultry, which is giving students hands-on experience in raising and processing poultry and marketing those products to the public.

“Students have to produce a product that meets industry standards; it doesn’t get any more real than that,” he said.

St. Hilaire said campus agricultural programs will continue to have his support as he champions programs that serve students, the university and valley agriculture. While quick to point out he cannot speak for the university president’s office, he assured Farm Bureau leaders that university leadership remains committed to helping agriculture thrive in the region through the efforts at Fresno State.

He sees his role as part ambassador for valley agriculture through Jordan College. The ag robotics event in Fresno that included a demo day at the Fresno State farm is just one example of how the university can work collaboratively with industry. Research and outreach efforts that connect California agriculture with the university are another way to build bridges and benefit students and agriculture in a region that owes its existence to agricultural production and processing.

Through the addition of some state funds, St. Hilaire says Fresno State will repair and renovate its agricultural facilities. This, he said, will help the university build strong initiatives through the Jordan College on things like sustainability and climate smart agriculture.

St. Hilaire succeeded Dennis Nef, who retired earlier this year after serving as Jordan College dean since 2019. Nef served 39 years at Fresno State University as an agricultural business faculty, and later served as a department chair, associate dean, and interim dean before his recent return as dean.