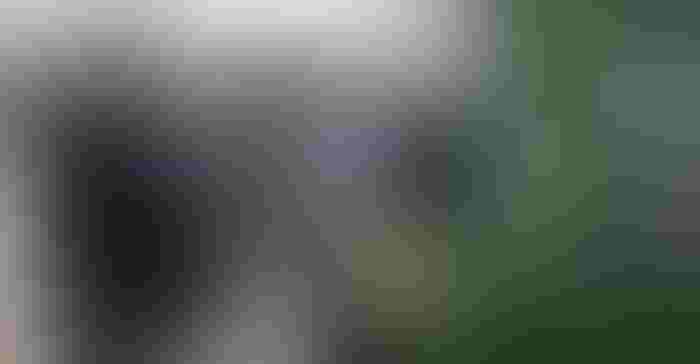 TALKING AGTECH: Shaun Fiedler, who farms near Stanchfield, Minn., hosted a group of dignitaries to his farm including Andrew Wheeler (facing in sport jacket). This included a short tour of all the tools and technology used on the farm.Willie Vogt

For Don and Shaun Fiedler, soybean harvest took a break Monday, Sept. 28 at their Stanchfield, Minn., farm. The combine was parked along with other farm equipment on display as EPA Administrator Andrew Wheeler stopped by for a visit. Wheeler has been on the road a lot the last few months, visiting sites related to EPA's role in the environment, and in Minnesota he visited a brownfield site near St. Cloud, then traveled to the Fiedler farm.

At the farm he was greeted by state and federal officials from Minnesota, including Pete Stauber, R-Minn., who represents the eighth district, who invited the administrator to Minnesota. During the farm visit, Wheeler announced a $642,546 grant to the Minnesota Department of Agriculture for use in 2021.

He explains the grant will "be used for training and certifying pesticide applicators and educate and outreach on pesticide use." He adds that this is a "great opportunity for EPA to work more cooperatively with farmers across the country, when we do things like that."

Wheeler turned his remarks to three issues – the Renewable Fuel Standard, dicamba reregistration and work on the Waters of the U.S. issue.

The second ag issue Wheeler addressed is dicamba. The herbicide lost its registration through a Ninth Circuit Court ruling that stated the label was not clear and led to improper use of the product.

"I want to mention [dicamba] just because it's been a contentious issue and it's something that has actually pitted farmer against farmer, and that is something we certainly don't like to see," he says.

He points out that when he became acting Administrator of EPA two years ago, one of his first acts was to relicense dicamba. "And we did it with some additional restrictions on the labeling for application," he says. Those included buffer zones, time of day application restrictions and wind speed limits during application.

The agency did step in and allow continued use for the current crop year so farmers could use through July 30, which Wheeler says, "took care of just about everybody that needed to apply it."

Wheeler notes two major manufacturers have reapplied for a dicamba license to be ready for next year. "We are currently reviewing the applications. We want to make sure the applications address everything that the Ninth Circuit raised," he says. "We want to make sure that it can be safely applied and that it is safe to use before we make a decision."

"I've had a few briefings," Wheeler says. "They've told me some of the things [the companies] are looking at but I don't want to send any false signals out there. And I don't want to, I can't prejudge until I get the actual recommendations from my staff."

The hurdle to clear for a new license involves the framework outlined in that Ninth Circuit Court ruling earlier in 2020. Wheeler says he'll be reviewing the applications with the Ninth Circuit decision in mind "before I make a decision, whether or not to relicense and then what are the requirements around it?"

Approval of the new license isn't a sure thing noting that if the applications don't clear the court-mandated "hurdle" Wheeler adds: "We won't be able to realize it in time for next year, but we will keep working on it. My goal is to have a decision in the next couple of weeks."

Wheeler was pressed during the farm visit about timing of the license decision on dicamba, with some noting that farmers are already making seed buying decisions.

Wheeler talked briefly about the Waters of the United States, or WOTUS, which raised a range of questions for farmers when proposed. He notes that if implemented, under WOTUS 98% of Iowa would "have been under federal jurisdiction under the Obama WOTUS rule. It was stayed by the courts," he says.

Wheeler notes that under the Trump administration, a review of the issue showed that the debate of "what is a wetland, what is a navigable water for 40 or 50 years. We really ought to have some certainty, he says.

He explains that EPA went back and reread the Clean Water Act passed back in the 1970s defining a navigable water, and they looked at the three supreme court decisions. The result is the navigable waters protection rule, finalized earlier in 2020 "and I hope it will provide more certainty for everyone. We've already passed our first legal test," he says.

The goal of managing water? Wheeler says the work is aimed at one target: "I want a property owner to be able to stand on his or her property and be able to tell for themselves, what is a federal waterway without having to hire outside attorneys or consultants to tell them."

As part of his visit, Wheeler got a farm tour where he learned more about the tools and technology the Fiedlers are using in their operation. Check out the tour in the slide show.