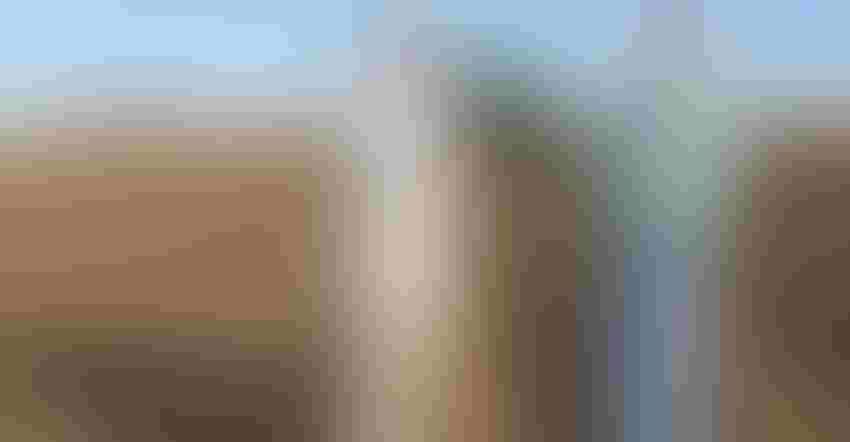 Caleb Miller, left, and his father, Gordon, stand on the field where the last 100 acres of their 2019 peanut crop was being harvested.Brad Robb

Cover crops and a peanut/cotton rotation are increasing yields and lowering input costs for Leachville, Ark., farmers Caleb Miller and his father, Gordon. They look forward to an even more efficient peanut harvest in 2020 with completion of the new Delta Peanut buying point in Jonesboro, Ark.

The Millers had been using a hipper to incorporate a cover crop mix of cereal rye, black oats, and vetch, but after a neighboring farmer retired, they bought his rice drill and last fall drilled the cover crop mixture into the sandy loam soils around Mississippi County, Ark.

"I watched a few farmers do it and I'm convinced it's the best way to get a uniform cover crop stand," says Caleb, who keeps the drill hooked to a tractor and this fall drilled 1,400 acres himself.

"All of our equipment is tied up at the same time with cotton and peanut harvests, so if we couldn't get a peanut trailer, I would jump on that tractor and start planting cover crops in fields where we'd already harvested peanuts or cotton."

Gordon and consultant Greg Smith were apprehensive about letting the cover crop get too tall before burning it down prior to planting. "I had to convince them to let it go until it was time to plant," Caleb says. "We planted cotton into it green after the previous year's peanuts. We hit a dry spell and the cotton didn't emerge until we got a rain, but we ended up getting a healthy stand. I was glad we didn't have an issue with 'green bridge' where pests transfer from the cover crop to the crop we planted."

The Millers had thrips pressure one year, but thrips were not an issue in the cover cropped fields. "It was the spring of 2018. We started irrigating early because it was so dry. It was 10 or more days before the cover-cropped fields started exhibiting any stress," Caleb says. "The extra root growth from the cereal rye, which grew up to my chest, retained the moisture, kept the sand from blowing, and helped suppress pigweeds and thrips."

The only places where pigweeds gave them a problem were on the ends of fields where the cover crop was thin.

The first year Caleb farmed one particular field, he planted cotton and seedling disease killed it. They planted soybeans after the failed cotton, peanuts the next year and then cotton the next two years. "Cotton loved the nitrogen left in the soil from peanuts," Caleb says. "We averaged around 3 bales that year, and that wasn't even our best ground."

Last fall and this spring were so wet, drilling a cover crop into that field was not an option. "We just no-tilled cotton straight into last year's cotton stalks on the same beds," Caleb says. "I haven't seen the gin sheets yet, but I know we dropped more modules on that field this year than last."

Burning less diesel and putting less time on equipment from fewer trips across the field are a bonus. "We don't have time for those extra trips because we're producing multiple crops and that would push back harvest," Caleb says. "Unless data from Extension or USDA tells us we can be more profitable tilling (conventionally), I'm going to keep cover cropping and no-tilling."

Caleb is not a plant scientist but has seen the benefits of a cover crop. "It all goes back to earthworms and micro-organisms. Last year we were digging peanuts and as I walked behind the digger, earthworms were everywhere feeding on micro-organisms, which is a sign of healthy soil," Miller says.

"We put that field in cotton the next year and when we started irrigating, that cover cropped soil took up water more efficiently and showed less potash deficiency than other fields. We also had a significant increase in yields.

Gordon Miller is a stakeholder in the Jonesboro, Ark., Delta Peanut buying point. Miller Farms Partnership is 70 percent cotton and has about 800 acres of peanuts. "Low grain prices pushed us into peanuts," Gordon says. "We look forward to the new Delta Peanut facility but understand wet weather has slowed their construction schedule."

The Millers still had 100 acres of peanuts to harvest on Nov. 25. "I don't think it will hurt our quality or yields because we've had better conditions than we did last fall," Gordon says. "It wasn't the best year for peanuts, but it has not been our worst. Our soils are great for peanuts, and we can make a profit."

The longer they can hold off digging, the more the peanuts will mature. "We try to shoot for a 70 percent maturity level," Gordon says. "We'll start losing the mature ones if we wait too long."

They pull a few plants from various sections in the field, put them in a basket, and blast off the hides to check maturity. The darker the peanuts, the more mature.

An additional benefit from rotating peanuts with cotton has been the decline in root-knot nematode pressure. "We've seen a 200-pound yield increase in our cotton after peanuts," Gordon says."

The Millers' operation is 100 percent irrigated. They have 25 pivots, but also furrow irrigate with miles of flexible pipe. Gordon was not sold on the value of Pipe Planner until he learned how it worked. "It saves us money on water and also on pipe costs," Miller says.

"Some of our fields slope and elevation change is figured into the program. It tells you where you need to put a barrel, and how much space the pipe needs to keep from blowing out. It does so much more than just tell you the size of holes to punch in your pipe."

The Millers' farm is located between the Mississippi River and Crowley's Ridge. They are aware of the depleting aquifer but have not noticed a decrease in water quantity or quality over the years. Their well casings are around 100 feet with 60-foot settings.

"The aquifer in this area seems to recharge quickly," Caleb says. "If all we saved on average was one and a half irrigation events across our entire farm annually from Pipe Planner and cover crops, the water savings would still be considerable."

They add more surge valves each year. "We probably have 40 or more now," Gordon says. "On a field where we once wanted to irrigate 12 hours on one side and 12 on the other, the surge valve lets us finish the entire irrigation event in 18 hours. It's so much more efficient."

Producing corn, cotton, soybeans, peanuts and a little rice challenges their equipment logistics at times. "We may add a little more corn next year, but our peanut and cotton acres will stay the same," Caleb says.

"Even with the new buying points and shelling facilities, the equipment we have allows us to produce the volume of peanuts we want. We know which fields to put our peanuts on, and we're not going to start crowding our rotation schedule because we'll start seeing soil-borne diseases like those common in the Southeast."