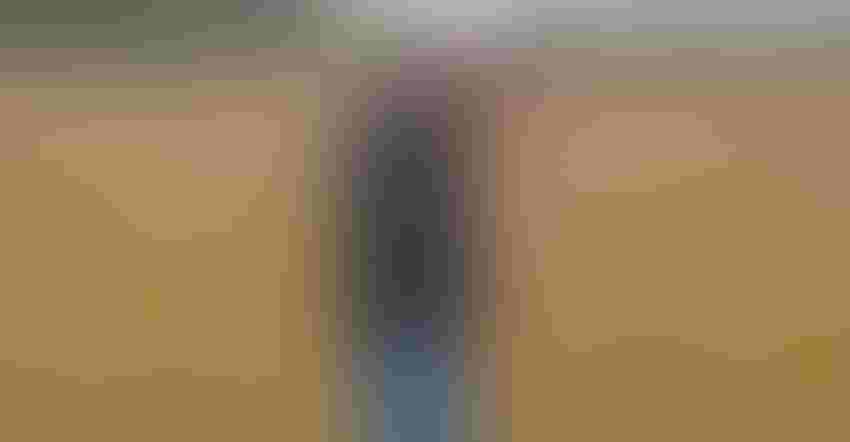 Soybean maturity timing is linked to photoperiod. But it’s also linked to such things as planting date and weather conditions. The two photos below, taken three weeks apart, prove the point. Both were taken at the spot where the two primary varieties in the Soybean Watch ’19 field meet.

“In a normal year, if soybeans were planted on time, we would have expected them to look like the field did on Oct. 7 back on Sept. 16,” says Steve Gauck, a Beck’s sales agronomist based near Greensburg, Ind. “This wasn’t a normal year where this field is located.” Beck’s sponsors Soybean Watch ’19.

This field was no-tilled with a John Deere 750 drill on June 12. Shaun Casteel, Purdue University Extension soybean specialist, observed in August that although soybean maturity is closely tied to day length, maturity would be about three weeks behind normal for most varieties this season, assuming beans were planted in June instead of May.

His prediction seems to be about right for this field, Gauck agrees. Once soybeans began to reach maturity, with leaves changing color and dropping, the change occurred quickly. That accounts for the dramatic difference in the two photos taken just 21 days apart.

DRAMATIC CHANGE: This image shows two photos shot from the same place in the same field three weeks apart. In both photos, a slightly earlier-maturing bean is on the left and the fullest-season variety is on the right. The shovel in the photo on the left marks the divide. Plants on the right are slightly taller. The left photo was taken Sept. 16, and the right photo three weeks later, on Oct. 7.

While the change in those three weeks was dramatic, there were signs that plants of both varieties were beginning to reach the end of the season even when they were mostly still green. Gauck observed on Sept. 16 that yellowing was appearing lower in the canopy.

“Part of it relates to lower leaves getting less sunlight that far into the season deep in the canopy,” he says. “There also may have been some bacterial foliar symptoms showing. Even when I checked on Oct. 7, I was surprised at the absence of any major stem diseases. Both varieties seemed free of disease which affects stems.”

This field was very dry after a significant rain on Labor Day weekend. That may explain why plant leaves changed quickly once the change began to occur. There were also very hot days in that three-week stretch, including record-hot days in very early October.

“The bottom line is that maturity patterns this season verify what agronomists have said for a long time,” Gauck says. “A major factor in soybean maturity is daylength, because it determines when a variety begins flowering.

“Yet sometimes people think it’s the only factor, and it’s not. If planting is delayed, maturity will also be delayed. The relationship may not be as straightforward as in corn, but it is still there.”