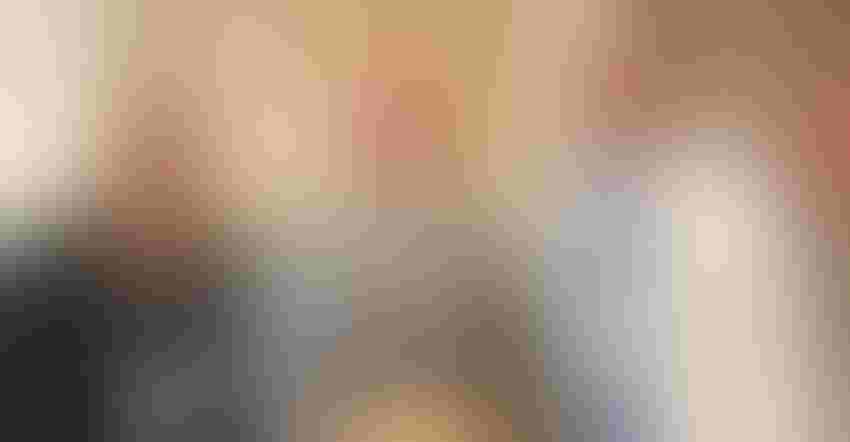 Fellow of the American Peanut Research and Education Society: from left, Kelly Chamberlin, Fellows committee chair, with Gary Schwarzlose, who was named a Fellow of the APRES at the Society's annual meeting, and APRES President David Jordan. Christina Taylor, APRES Director of Communications

Gary Schwarzlose, Bayer CropScience, was named a Fellow of the American Peanut Research and Education Society (APRES) at the Society’s annual meeting July 14 in Dallas, Texas.

In a nomination letter, Peter Dotray, Department of Plant and Soil Science, Texas Tech University, Lubbock, wrote: “Gary has been one of the pillars of this professional society for decades. He was a leader when our society transitioned from 2- inch by 2-inch slides to PowerPoint presentations in 2011 and again when we were forced to use a virtual-based format because of COVID in 2020 and 2021.”

Schwarzlose described his reaction to being named an APRES Fellow as “one of amazement and honor. Looking at the people listed as APRES Fellows makes me proud to be recognized on that list. It is an outstanding group of professionals.”

He said APRES is more than a professional organization. “This is a close-knit group of people, more like family than a group of professionals. We know each other’s family members. We know about their families and keep in contact throughout the year.”

He said the Society offers professionals opportunities “to share information and present the work we’re doing, but we also take time for family activities — ice cream socials, the fun run, and the annual banquet. The family aspect of APRES makes it special.”

Schwarzlose said he might get credit for a lot of things but acknowledges others for much of the success he’s had. “It’s always a whole team of people,” he said.

Dotray cited Schwarzlose for his leadership in annual meeting local arrangements, his expertise in organizing virtual meetings during COVID, and public relations efforts.

“Gary assisted in putting together an excellent program in Williamsburg, Virginia, when we celebrated our 100-year Anniversary,” Dotray said.

Schwarzlose has served APRES in numerous capacities, including President-Elect, President, and Past-President.

Other industry colleagues wrote in support of Schwarzlose.

“Gary Schwarzlose is one of the most generous and caring individuals I have ever met,” Kerns wrote. “Anytime I needed agri-chemicals for my research plots, he always more than met my needs.

“Gary Schwarzlose is dedicated to agriculture, his colleagues, and cooperators. He is most worthy to be recognized as a Fellow of the Society for the American Peanut Research and Education Society.”

W. James Grichar, Texas A&M AgriLife senior research scientist, Corpus Christi, wrote: “I think his biggest contribution to the Society has been his tireless work during COVID to assure that the virtual meetings held in 2020 and 2021 went on without any issues.

“Everyone was concerned about possible glitches during these meetings, but Gary worked tirelessly to make sure issues were few and far between and the meetings went according to plan.

“Gary has been a tireless worker for the peanut industry as well as APRES, and he is very deserving of being named a Fellow for this organization.”

“Gary has a caring personality for each of the society’s members, but he is especially dedicated to our student membership,” Baughman wrote.

“Gary understands that these members are the future of our society and is always there to support and organize events that benefit our student members.”

On a personal note, this writer was honored to write in support of Schwarzlose’s nomination: “Gary’s years of service to agriculture, his dedication to excellence, and his commitment to the people and institutions that produce food and fiber make him a deserving candidate for Fellow of the American Peanut Research and education Society.”

To qualify as an APRES Fellow, nominees must be active members of the Society at the time of their nomination and must have been active members for a total of at least five (5) years. The nominee should have made outstanding contributions in an area of specialization in research, Extension, or administration in public, commercial or private service activities.

The nomination includes a minimum of three supporting letters (maximum of five). Two of the three required letters must be from active members of the Society.

Dotray put the honor in perspective. “Gary does not seek accolades for his service and dedication to APRES,” he said, “but he has earned [the honor] to be a Society Fellow for his numerous contributions.”