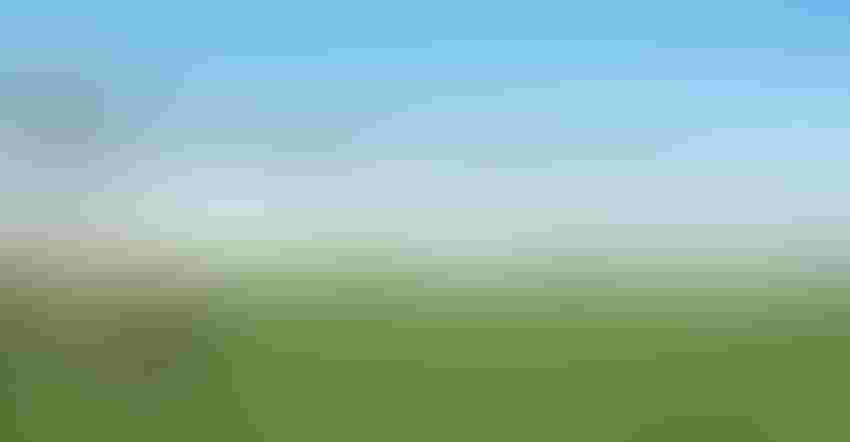 David Kerns, AgriLife Extension state integrated pest management coordinator and professor in the Texas A&M Department of Entomology, said fall armyworm activity has increased over recent weeks. He noted infestations in Corpus Christi and egg lays around College Station. Forage producers in the eastern half of the state should actively monitor pastures for the pest, he noted.

“Applications are ongoing, and we’re really on the front end of infestations, so they are definitely something to look out for,” Kerns said.

Fall armyworm populations typically build following large rain events that promote grass growth for the pest populations to develop and build. The pest damages forage and got its name because they appear to march army-like across hay fields, consuming the grass in their path. 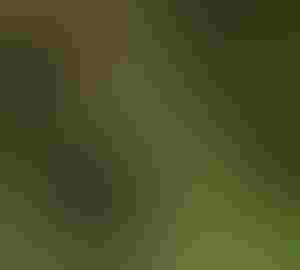 The pest’s name is also indicative of their active season, and activity typically begins to increase between July and September, but wet weather can trigger outbreaks, Kerns said. The pest can persist until frost.

“We see how well Bermuda grass responded to the moisture, and so given the drought and the short hay supplies, forage resources are precious and should be protected accordingly,” she said. “If you’ve invested in fertilizer or planted winter pasture, you need to protect that investment.”

Fall armyworms are green with brown or black colorations and can be identified by the white inverted Y on their head. They can grow up to 1.5 inches in length when mature.

Corriher-Olson said fertilized Bermuda grass and small, tender seedling cool-season forages are at a greater risk of being infested by fall armyworms.

Whether producers hope to make one more cutting of warm-season hay or establish good stands of cool-season forages like ryegrass or winter wheat, Corriher-Olson said they should be ready to act against fall armyworms as soon as the pests near threshold.

Corriher-Olson recommends producers scout for fall armyworms in the morning.

“You should have products on hand and be ready to spray because tomorrow could be too late,” she said. “Scout early and treat them immediately once they reach threshold because they can demolish a field overnight. You can tell pretty quickly if you have a problem by walking through a pasture. Scouting may take a little time, but it doesn’t cost anything and could be the difference in saving a pasture or losing it to fall armyworms.”

Be ready to control quickly, effectively

Corriher-Olson and Kerns said they have not heard of any product shortages, but producers should have pesticides labeled for fall armyworms at the ready. Kerns said despite inconsistent fall armyworm control with pyrethroids in 2021, AgriLife Extension tests in College Station and Port Lavaca have shown pyrethroids to be an effective, economic treatment option for producers.

“Pyrethroids appear to be providing good control this year,” he said. “A week out from a test and you can see those pastures are having a few more fall armyworms in them but not enough to respray. There are better products, but pyrethroids are so much more economical.”

Corriher-Olson said combination sprays of pyrethroids and products that provide residual coverage can be an effective one-two punch that provides control over a longer period, which can be important when weather creates conditions for multi-generational outbreaks.

Another noteworthy pasture pest, especially in Central Texas this season, are desert termites, Kerns said. The pest eats dead grass but will cover healthy grass in mud tunnels to kill and then eat it. The tiny mud tunnels along the soil surface amid dead grass are a visual sign of desert termite.

See, WHEAT SCOOPS: There is not a world wheat shortage

“They seem to be everywhere from Uvalde to Hillsboro, but they are primarily a Central and West Texas pest,” he said. “As the name implies, they like dry weather.”

Kerns said experiments with the pyrethroid, lambda-cyhalothrin, reduced desert termite activity by 95%, but it is not labeled for the pest. However, producers treating fall armyworms with lambda-cyhalothrin should see good desert termite control. Pyrethroids can also be effective against another forage pest – Bermuda grass stem maggot flies – if they are present during application, Corriher-Olson said.

Corriher-Olson noted reports of stem maggot in some East Texas fields, but no major outbreaks so far. But she said they are also worth monitoring. Flies lay eggs in the plant stem, and the larvae move into the upper node to eat, which causes damage to the top two leaves. Infestations can look similar to frost damage.

“It is one of those years that protection of forages should be at a premium,” she said. “Whether you’re protecting new growth for winter grazing or a fertilized pasture you hope to get one more cutting before grasses go dormant, when it comes to fall armyworms, you just have to think about the value of that forage.”

Hot and dry conditions continued in the area. Soil moisture was very short in most areas. Grasses were burning up, and stock tanks were dry. Crop, rangeland and pasture conditions were poor. Livestock conditions were fair. Cotton harvest wrapped up with lower yields and quality grade concerns reported. Yellow aphids were in pecan trees and worse than they have been in several years. Armyworms were hitting some areas, while desert termites were hitting the southeast Blacklands region. Winter grazing planting looked bleak.

Conditions were still very dry and declining. Rangelands and pastures were low on grazing, and water tanks were low. Armyworm moths were reported in multiple counties. Some producers made another cutting of hay. Some wheat fields were planted, but other producers were waiting for more moisture. Cattle looked good. Cotton fields were being zeroed out due to the lack of production.

Widely scattered showers slowed fieldwork. Soil moisture across the district ranged from short to adequate. Many fields were sprayed or tilled to stop volunteer growth. Cotton harvest continued, and rice harvest neared completion. Some fields were being prepared for cool-season forages. Rangeland and pasture conditions varied from sparse grazing to surplus forages. Producers continued to cut and bale hay, but poor to fair yields were reported. Livestock producers continued to look for hay, and cattle markets were reporting good prices.

Drought conditions worsened. Subsoil and topsoil conditions were short. Pond and creek water levels were dropping. The lack of rainfall caused pasture and plant growth to slow. Pasture and rangeland conditions were fair to good. Producers who managed to get another hay cutting were having difficulty curing windrows due to high humidity. Fall calving was underway.

Dry conditions continued. Pumpkin farmers were still harvesting pumpkins, and crop yields appeared to be slightly above last year despite the drought. Cotton looked better following rainfall last month, and bolls were opening. Producers were making decisions on whether to apply harvest aides or wait for a freeze. Sorghum was maturing and getting closer to harvest. Cucumbers continued to be harvested. Wheat was being drilled in quickly to take advantage of the soil moisture. Sunflowers were drying down. Pastures were green and growing, but armyworms were a major problem.

Conditions remained hot and dry. Soil moisture levels were very short to short. Producers were busy harvesting silage and wrapping up hay crops. Wheat planting continued with some early planted wheat starting to emerge. Some irrigation was applied to wheat to get it ready for early pasture. Corn harvest was approaching with a few producers starting to sample some fields. Grain sorghum was maturing with harvest expecting to start in early October. Cotton harvest was still a ways off, and some producers were preparing to apply harvest aides to get the cotton out in a timely manner. Rangeland and pasture conditions were poor in most counties.

Topsoil moisture was short to adequate with no rain reported. Warmer temperatures continued to dry out the topsoil. Most crops were harvested except for some soybeans and cotton. Pasture and crop conditions were declining. Soils were cracking from lack of moisture. Most were showing a major increase in weed pressure, including ragweed, nightshade, broom snakeweed, bitter sneezeweed and goat weed. Hay production was still in a major deficit. Fly numbers were very high and a nuisance to livestock. Overall, livestock conditions were being maintained, but cattle inventories were low. Producers were preparing fields for winter wheat.

Temperatures were around 90 degrees with nighttime lows around 65 degrees. No rainfall was reported. High levels of rainfall in recent weeks improved grazing conditions dramatically. Some ranchers were considering hanging on to heifers due to good grazing. Ranchers in other drier areas were reporting poor grazing and that fall cattle shipping was underway. Heat was pushing cotton fields, and most bolls were open. Cotton harvest was expected to begin soon, and some producers sprayed harvest aides. Supplemental feeding for livestock and wildlife continued.

Soil moisture continued to decline under hot, dry conditions. The little moisture received a couple weeks ago was gone from the soil profile. Weed management was underway, especially in hay fields. Most farmers were waiting to plant wheat due to lack of moisture and the fear of insect infestations. Fall armyworms were found in volunteer wheat after the recent rains. Cotton fields continued to be zeroed out and destroyed. Livestock conditions improved a bit where there was grazing, but agents were still seeing thin cattle.

Conditions were hot and dry, and extreme drought conditions continued in some areas. Some spotty overnight showers delivered trace amounts up to half an inch of rainfall. There were a few reports of armyworms, but not in significant numbers. Crop producers were busy preparing for winter wheat and oat planting where adequate subsoil was available. Cotton harvest should be completed soon. Grain corn and Sudan grass fields were disked to make ready for future plantings or cover crops. Pasture and rangeland conditions were still declining. Livestock and wildlife were in good condition, but supplemental feeding continued.

Soil moisture levels were mostly short with some areas reporting very short and some areas reporting adequate moisture levels. Some scattered showers were reported in eastern and southern parts of the district. Conditions remained warm with temperatures in the mid-90s, but nighttime temperatures were cooling. Peanut harvest was underway though some fields continued to develop. Cotton harvest continued in some areas while other fields continued to mature. Strawberry producers continued to prepare fields. Farmers were pre-irrigating fields for winter vegetables. Pasture and rangeland conditions were fair to excellent but declining in most areas due to the heat. Forage production and hay baling continued amid reports of armyworms, and some producers were spraying fields for the pest. Cattle and forage producers were watching armyworm numbers closely. Hay was being fed to livestock. Producers were preparing for wheat and oat plantings. Producers were also spraying pastures and fields for weeds. Cattle prices were steady, and sale volumes were lower. Some ranchers were buying replacement cattle. Feed prices remained high. Dove hunting was below average this season.