Growers who use cover crops are increasingly turning to a tool that can flatten out their actively growing fields, usually in a single pass. 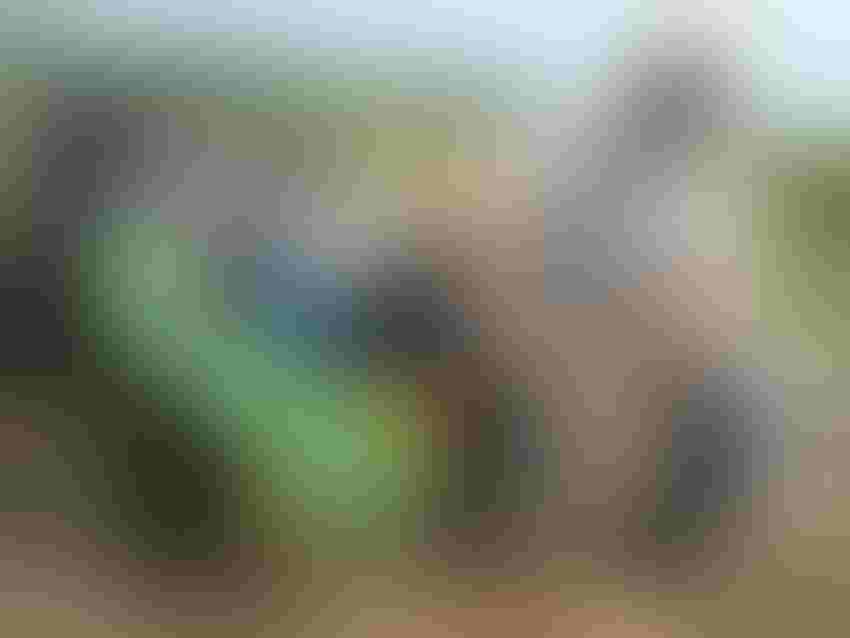 Growers who use cover crops are increasingly turning to a tool that can flatten out their actively growing fields, usually in a single pass. Known as a “roller/crimper,” the technology can help reduce and sometimes eliminate the need for herbicides.

Cover crops can improve soil quality; and in organic operations, they play a major role in keeping weeds in check. Crimpers boost those benefits. They have been used for years in South America and are beginning to catch on in the United States, says Ted Kornecki, an agricultural engineer at the Agricultural Research Service’s National Soil Dynamics Laboratory in Auburn, Alabama. He has conducted a study evaluating several crimpers to give guidance to growers and has patented three crimper designs.

There are several types of crimpers. Most involve some type of rolling, paddle-wheel-like cylinder that attaches to a tractor and barrels over a field, tamping down and crimping the cover crop into a smooth mat to kill it. About 3 weeks later, a planter, running parallel to the roller’s path, can plant seeds directly into the ground without significantly disturbing the biomass mat. The technology has shown promise in early trials and demonstrations.

“It definitely works,” says Frank Randle, who helped evaluate a crimper similar to one designed by Kornecki as part of a 4-year demonstration project on his farm near Auburn. Randle used cereal rye and crimson clover as cover crops before planting organic watermelon, squash, okra, and tomatoes. The clover was difficult to kill with the crimper, but the device terminated the rye effectively.

After the fourth year, Randle did have to till the plots to control some perennial weeds, but the crimper could be used again continuously for years after that.

“Yields actually increased a bit over time with the rye because we were adding carbon to the soil, and these are sandy soils that really need some help,” Randle said.

The project was a cooperative effort between ARS and USDA’s Natural Resources Conservation Service (NRCS). Funding was provided by an NRCS Conservation Innovation Grant.

Cereal rye is a fairly common choice of cover crop among growers, Kornecki says. Rye is typically planted in the fall, killed in the spring, and left to decompose before a cash crop, such as corn, is seeded through it. The effectiveness of crimping a cover crop largely depends on its “termination rate,” or the percentage of it that dies after crimping. Studies show that termination rates of about 90 percent are optimal to ensure that enough residue remains on the soil surface to form a dry, brittle mat that will be easy to penetrate with seeding equipment.

“The more plant biomass you have on the soil surface, the more benefits you see,” Kornecki says.

The problem is that vegetable growers need to plant their vegetables at recommended times in the spring for sufficient yields. It can be difficult to hit that “sweet spot” when the time is right for spring planting and the cover crop has reached the optimal stage for termination. With rye, the time is just after flowering.

“If you roll it too early, it’s very difficult to kill. The root system is strong and it will compete with the cash crop for moisture and nutrients, and that can reduce the yield,” Kornecki says.

Conventional growers can use herbicides to kill their cover crops, but organic growers don’t have that option. They are at the mercy of their planting schedules and must sometimes roll cover crops before they are at the right stage for termination.

Several different crimpers have been developed, but none has been evaluated for no-till conventional and organic vegetable operations. To get some answers, Kornecki and his colleagues assessed the effects of three experimental roller-crimper systems on soil moisture, yield, and rye termination rates over three growing seasons in a northern Alabama sweet corn field. Each year, they planted the rye in October and crimped it the following April. They planted sweet corn 3 weeks after crimping the rye—seeding it directly into the rye residue with a no-till planter—and harvested it in August. They passed the crimpers over the rye at two different speeds (3.2 and 6.4 kilometers per hour) to assess the effects of speed on rye termination rates and soil moisture.

The rollers evaluated were an original straight bar, similar to technology developed in South America; a smooth roller with a crimping bar; and a two-stage roller that has both a smooth drum and a spring-loaded crimping bar. The latter two rollers were designed and patented by Kornecki. They compared the rollers to a control treatment where glyphosate was applied to kill the rye and a smooth drum roller was used to flatten it.

They found that roller type and operating speed did not affect soil moisture. At either speed, the rollers produced higher yields than the control treatment in the first year of the study, when rainfall was plentiful, and in the second year, when drought occurred. None of the roller designs was as effective at killing the rye as the glyphosate control treatment, however, with overall termination rates of about 50 percent, well below the recommended 90 percent. But that was because the researchers did what most growers do: They planted the cash crop at the recommended planting dates, which meant rolling the rye earlier in its growth cycle than when it ideally should have been rolled. The researchers believe that with improved timing, the rollers could produce optimal termination rates.

The results, published in 2012 in HortScience, give guidance to organic vegetable growers who cannot use herbicides. The researchers recommend that growers in Alabama minimize the risk of low termination rates by planting rye by late September instead of mid-October so that it can be rolled 2 weeks earlier in the spring. They also recommend making multiple passes with the roller to increase termination rates.

Kornecki is seeking commercial partners to develop the two larger, patented rollers evaluated in the study as well as a new one he has developed and patented. Intended for smaller operations, it can be guided like a lawn mower and uses a 2-wheel walk-behind small tractor as a power source.