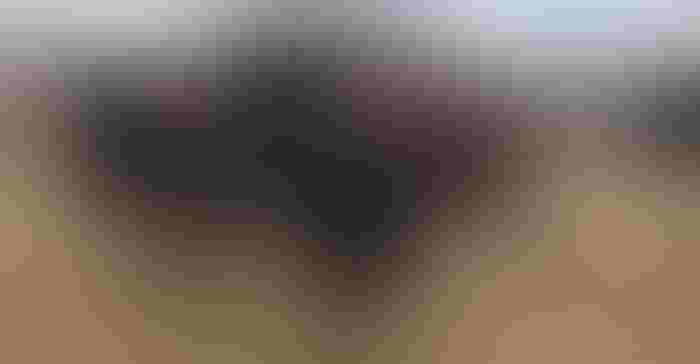 SOLD! Two bison exit the sale ring after the auctioneer’s gavel drops at the Maxwell Wildlife Refuge Buffalo Auction, held Nov. 2 in Canton, Kan. The annual event is an important part of the conservation of the herd. Jennifer M. Latzke

The auctioneer’s cry cuts through the Kansas wind on this brisk November morning. A capacity crowd of about 200 bidders and onlookers have climbed atop the catwalk above the sorting pens to peruse the sale lots of stock, starting at 8 a.m. And now the crowd fills the metal bleachers around the sale ring, some with the goal of packing their freezers with meat for the coming year. Some with the prospect of bringing home new genetics for their herd. And some just to watch the show.

Hold on to your hats, it’s the annual Maxwell Wildlife Refuge Buffalo Auction.

Maxwell Wildlife Refuge, just 6 miles north of Canton, sits on the southern edge of the Smoky Hills in central Kansas. Its 2,560 acres are managed by the Kansas Department of Wildlife, Parks, and Tourism, and it is one of two bison refuges in the state devoted to conserving this majestic symbol of Kansas. The other is Sandsage Bison Range and Wildlife Area, south of Garden City, Kan.

Each fall, the Kansas Wildlife Department holds a public auction of select animals from the Maxwell and the Sandsage herds at the Maxwell Refuge. The money raised will support the conservation efforts of these herds. And it has been one way to expand genetic diversity among public and private buffalo herds in the United States.

But just as with any livestock auction, there’s a lot of preparation that goes on before the first lot hits the ring.

Days before the auction, Cliff Peterson, manager of the Maxwell Refuge, will scout the herd and use a marking system to make sure he keeps specific animals in the herd. Then, Peterson and a team of helpers from the Kansas Wildlife Department will gather the herd into the sorting pens. The herd is a spring-calving one, so calves will be weaned during this fall sort and will go to the auction.

These sorting pens are specially designed to handle bison safely and securely for both the animals and the humans. The pens and aisles are built from 2-inch-square pipe, and are taller than a bison. Metal sheeting restricts the animal’s views at strategic points for easier and safer handling. And gate latches are all controlled from the catwalks that are built above the whole setup. Using 10-foot-long poles with shaker paddles or flags tied to the ends, workers can maneuver the bison from one pen to another, quietly and  efficiently, all from above on the catwalk.

Dr. Byron Bachman, a veterinarian from Lindsborg, Kan., is on hand to write health certificates for bison over a year old, and to test for brucellosis and vaccinate heifers over 6 months. Bison have been a specialty of his practice for many years.

He says the biggest concern when it comes to bison versus his other usual patients is their disposition and handling. Otherwise, he treats typical ailments like pinkeye or foot rot, and makes sure the bison are ready to travel to their new homes.

“We use official ID tags for identification, in case any of them go out of state,” Bachman says. Years ago, before private herds started growing in popularity, Maxwell bison would be sold to buyers from as far north as Montana or the Dakotas, and all over the nation. Now many of these sold at this auction are going to more local buyers.

Like other livestock production, the bison market is influenced by consumer demand and environmental forces. The widespread drought across the West has reduced grazing not only for cattle herds, but also for bison herds as well, Peterson says. In a typical year, there would be quite a few Maxwell bison that will go for breeding stock, he adds.

“People don’t have the grass,” Peterson says. “So, the established herds are already having to cut back on their herds. Most of these will go to meat.” So, most of the bison in the auction will be destined for slaughter — some even the very next day.

The auction featured 80 bison from the Maxwell and Sandsage bison herds: a mix of mature cows and bulls, yearling heifers and bulls, and heifer and bull calves. Prices ranged, on average, from $950 to $1,000 for yearlings, to $1,000 for mature cows, to $2,000 for 2-year-old mature bulls. Peterson says the Maxwell auction serves as a good measure for bison ranchers who plan to sell their stock at the Kansas Buffalo Association’s annual sale in December.

Stuart Schrag is the public lands division director for KDWPT. He’s been helping with the Maxwell auction for several years, and he serves on the board of directors for the National Bison Association. He agrees with Peterson that drought has really taken a toll on bison ranches out West, causing some to reduce their herds considerably.

There is some interest in bison, though, from new or existing livestock producers interested in regenerative ranching, and that’s something that the NBA has been promoting with field days and educational materials.

Schrag says the bison meat market is still pretty solid among the health-conscious set. Not only has bison meat found its place in the meat case, but the pet food industry has also really expanded its use of bison in pet foods targeting holistic pet owners.

Several bidders were there just to fill freezers. For example, Jerry Schmidt, from Haven, Kan., was loading out a gooseneck trailer full of cows, calves and one bull after the auction, all meant for meat. “In our case, we’ll grass-feed the yearling bulls until they get more age,” he explains.

The final hammer has fallen on the last lot, and the bleachers start to clear. Trailer by trailer, buyers back up to the load-out chute, and cows, calves and bulls rumble onto their rides. And with the final clang of a tailgate, one more auction is in the books for Peterson and the crew at Maxwell Wildlife Refuge.