With only a few exceptions, flood-soaked grain isn’t usable for feed or food. 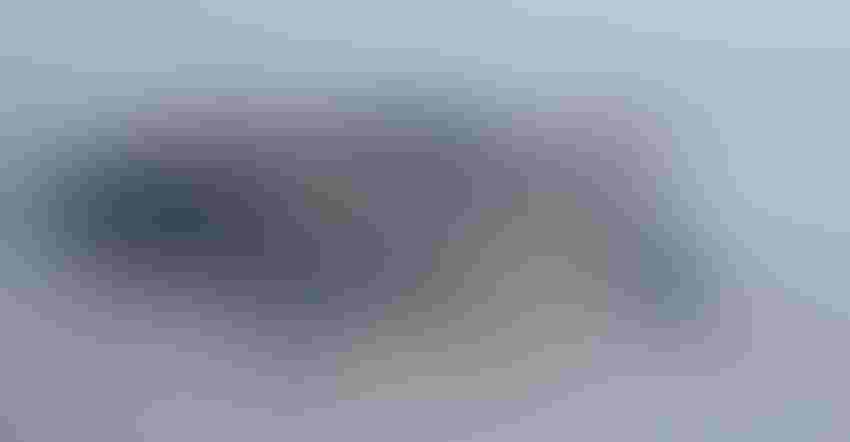 SOAKED: Grain bins have been inundated with floodwater this week on many farms in western Iowa.

Floodwater has seeped into grain bins this week on many farms in western Iowa and eastern Nebraska, as the Missouri River and tributary streams are flowing out of their banks. Hay and feed supplies have also been flooded in some cases. What should you do with that grain, hay and feed? Can you save it, dry it out and feed it? Or do you have to throw it away?

“We’ve been getting those calls from farmers,” says Julie Kenney, Iowa deputy secretary of agriculture. “Once grain, hay or feed come in contact with floodwater, it’s under the jurisdiction of the U.S. Food and Drug Administration. FDA will likely consider it adulterated, and it should not be fed to livestock. You need to check with FDA, and they will determine if grain can or cannot be fed. We are encouraging folks to assume it can’t be fed and work with FDA to be sure. And to make alternate plans for what to do with it.”

Check with FDA to be sure

“According to current policy of the FDA, grain inundated by uncontrolled river or stream water is considered adulterated and must be destroyed,” says Charlie Hurburgh, Iowa State University grain quality specialist and director of the Iowa Grain Quality Initiative. “The situation in 2019 is one of river water flooding, rather than rain-driven pooled water on low ground, for which there are salvage options.”

You need to check with FDA to be sure, but in most cases if grain comes in contact with floodwaters, it should not be fed to livestock. As shown by the example of the inundated Omaha sewage treatment plant, floodwaters can bring in many hazards and create very rapid grain spoilage.

Flooding affects both the stored grain and the storage structures, Hurburgh says. “Try to move the grain before the flood reaches the bin, but stop using underfloor conveyors and legs once the water starts entering the pits,” he advises. Hurburgh offers the following information and recommendations on handling grain in this situation.

Flood-damaged grain is adulterated grain because of the potential for many contaminants to enter through the water. This grain should be destroyed, never blended. Contact local public health and sanitation officials for the best disposal process in your area. A recently enacted federal law — the Food Safety Modernization Act — has increased public awareness of food and feed-related hazards.

Water coming up from drainage tiles and pits is just as suspect as the floodwater from rivers and streams because storm and sanitary sewers are usually compromised in floods. Even field tile water may contain animal waste products, high chemical levels and other contaminants.

Corn will stay at about 30% moisture after the water drains off; soybeans about 25% moisture. When stored grain is flooded, the moisture won't travel more than a foot above the flood waterline. There may be opportunity to remove the good grain that is on top of the flooded grain in the bin. Remove it either from the top or side, but not down through the damaged grain. The reclaim conveyors and pits under bins contain floodwater as well. Remove all the good grain before doing anything with the bad portion.

Do not start aeration fans on flooded bins. Take care not to track or mix mud or gravel from flooded ground into good grain during salvage operations. These materials are potentially toxic for the same reasons as the floodwaters. Also, have the entire bin structure and related electrical components inspected by a qualified electrician, to verify that nothing is still energized, before taking action to salvage the grain. In many cases, instead of the farmer trying to do it himself, it’s better to use professional salvage operators who will take correct safety precautions for bin entry.

Mold toxins are likely to be present in rewetted grain. Warm, wet conditions are ideal for mold growth, and moldy grain is a safety hazard. Use precaution and wear protective equipment when working with moldy grain. Grain will be moldy by the time the water has receded.

The FDA allows for reconditioning of grain (washing and drying at high temperatures) in cases where it is known that the water did not contain contaminants. This situation would be very rare, to know that floodwater was clean. In past flooding situations, the water was determined to be contaminated. You can expect that to be true in 2019 as well.

Grains swell when wet, so bin damage is likely and more so with soybeans than corn. Bolts can shear off or holes can elongate. Look for signs such as stretched caulking seals, doors misaligned or similar structural problems. Farm bins typically have lighter-grade steel and fasteners than commercial bins. Be aware of signs of failure when working around bins containing wetted grain.

Check bins with stirring devices carefully. The bin must be perfectly round for these devices to work correctly. Wooden storage structures will be hard-hit and may retain mold and contaminants. Bin foundations can shift, float or deteriorate from flooding. Inspect structures and foundations carefully. It’s a good idea to have an engineering firm do an evaluation if you have larger bins that have been flooded.

Expect electric wiring, controls, motors and fans to be ruined. Do not energize wet components. Be sure the power is off and locked out before touching any electrical components of flooded systems.

Clean and disinfect facilities and grounds completely. Then do a careful flood safety inspection before returning facilities to operation. A third-party inspection is recommended. Maintain records of cleaning.

Here are steps to take in case of flooded grain:

In the rare situations where the water was not contaminated, grain may be reconditioned. If the grain is sold, reconditioning must be done with the written consent of FDA. For feed to be fed on-site, producers have three alternatives:

Feeding must be done under the supervision of a veterinarian. Ensiling may be the best way of protecting quality and palatability. There is no problem, other than spoilage within a day or two, with using uncontaminated, soaked corn as a livestock feed. Just replace the corn in the animals' current diet with the wet corn. Remember to adjust amounts fed for moisture.

Wet, whole soybeans can be fed to cattle if the soybeans are limited to 10% to 12% of the ration's dry matter. Soybeans substitute well for the protein in soybean meal, but they need to be fed with a vitamin-mineral-additive premix if substituted for a complete protein supplement. It isn’t necessary to heat-treat the soybeans for cattle. Also, if adding whole beans to diets high in distillers grain, watch the total ration fat content.

For hogs, raw soybeans can only be fed to mature sows. The soybeans need to be heat-treated if fed to younger pigs.

Decisions need to be made quickly when you have flooded grain. The good grain should be removed immediately from the storage bin, and don’t remove it by bringing it down through the soaked grain. Remember, no flooded grain can be sold to any market without approval of FDA, to document its exposure only to uncontaminated water, with subsequent reconditioning and intended use.

This spring flooding of 2019 is not likely to create many salvageable situations for stored grain where water has entered the bin. However, localized flooding not originating from stream or river flow might be a salvage case. For more information, visit extension.iastate.edu/grain.