Leader of one of America’s largest food and ag companies presents the Gardiner Lecture Oct. 11. 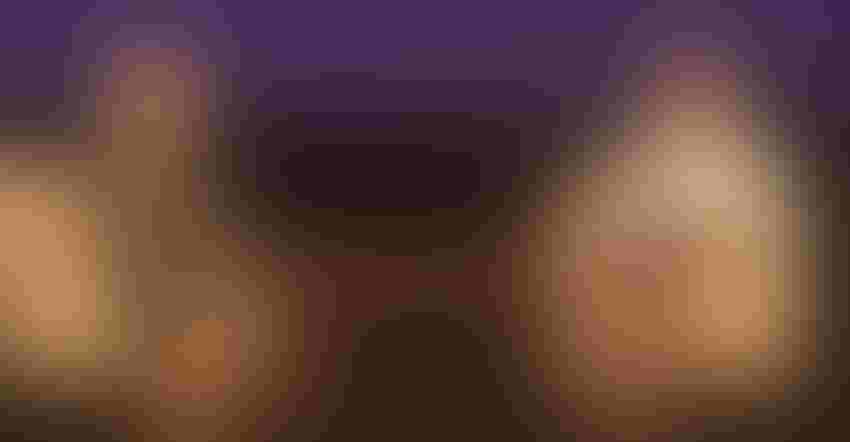 The leader of one of America’s largest food and agriculture companies said Oct. 11 the country’s farmers should be celebrated for their crucial role in providing food security, even if their work is sometimes overlooked.

Beth Ford, president and CEO of Land O'Lakes Inc., was the featured guest for the Henry C. Gardiner Global Food Systerms lecture series, held at Kansas State University’s McCain Auditorium. She spoke for nearly an hour in a chat moderated by Tyne Morgan, the executive producer of U.S. Farm Report.

Ford leads a company that recently launched a campaign that promotes the future of agriculture as being ‘rooted in tomorrow.’

Ford likened food security to national security. “And I think of farmers as the original environmentalists, the original entrepreneurs; they’re constantly reinvesting in their land for all of us. And they need to be loud about that. We want folks to understand that farmers … solve big problems.”

Ford called the world population’s lack of awareness about agriculture and the food supply “frightening, actually.”

In order to feed a world population estimated to grow to nearly 10 billion people, “we have to make more food by 2050 than the previous 5,000 years combined. That is the challenge. This is meaningful work, important work, and it starts with the farmer.

“When I say food security is national security, most people say, ‘Oh, yeah, I agree with that.’ But I don’t know if people just think that food just pops up on the retail shelf.”

Ford said her position with a leading agriculture company provides certain privileges to work on many of the greatest challenges facing agriculture.

One that is dear to her, she said, is the American Connection Project, a Land O’Lakes effort to bridge the digital divide common to many rural areas. More than 175 American companies and organizations —including the U.S. Department of Commerce and Microsoft — have worked together to provide free broadband and Wi-Fi in many rural American communities.

Ford said the group has successfully gained bipartisan support for legislation to bridge the digital divide, and $65 billion from the U.S. Department of Commerce.

“We cannot wait for years to have this occur,” she said. “That effort has been tremendously successful, but we are going to be even more successful when we can get everything implemented across the country.”

Ford said three other issues are “top of my mind” as challenges for American agriculture.

“No 1,” she said, “it is unacceptable that we have stopped investing in agricultural research at the federal government level. I say this because China is outstripping us 5-to-1; our country is at 1970s-level funding for ag research.

“We need the best thinking and best technology in agriculture to meet this grand challenge of creating more food by 2050 than all the previous years combined.”

A second challenge: Immigration reform. “We have to have labor in this country,” Ford said. “We are 2.5 million workers short. When I’ve met with companies and senators … what makes me sad is that nobody — from [either] side of the [political] aisle — disagrees that we need labor. And yet here we sit. We are not making a change.

“I get the conversation around border security. We need border security. But we need a solution, because more than 6 million acres of American land were not planted last year because of a lack of labor. In the Central Valley of California, about one-third of hand-picked crops were not harvested last year because there is no labor. We have got to solve this problem and come up with a solution.”

Ford said water is a third challenge for American agriculture. “That’s a state-by-state challenge, and I’m concerned because there are federal implications. When there is a fight for water between rural and urban areas, most people don’t understand the needs in rural areas for agriculture and the food supply.

“I would love to have a water policy; I’m not talking about water rights. I’m talking about investments in reservoirs, piping, desalination [and more] … We need to figure out what technology we can use to give ourselves an advantage over time and be resilient against our changing climate.

“Those are the three things where I think we [Land O’Lakes] are investing additional time and making a push toward, saying we need to have this conversation. These are going to be profound issues for [Americans] if we don’t solve them.”

Ford has been president and CEO of Land O’Lakes — a Fortune 200 food production and agribusiness company — since 2018. Her 35-year career spans six industries at seven companies.

She has previously been recognized by Fortune Magazine as one of the World’s 50 Greatest Leaders and Most Powerful Women, and named to Fast Company’s Best Leaders list. She was featured recently in the New York Times’ Corner Office column, and profiled in a “60 Minutes” segment titled “The Farmer’s Advocate.”

The lecture series is funded by the Gardiner family of Ashland, Kan. Henry C. Gardiner, who passed away just days before the first lecture in 2015, was known as a visionary leader who dedicated his career to improving the beef industry through science and technology.

See a transcript and video of Ford's chat with Morgan online.

Melgares is a news and feature writer for K-State Communications and Agricultural Education.
Source: K-State Research and Extension news service