Texas grower recounts blessings found in the midst of a hail storm. 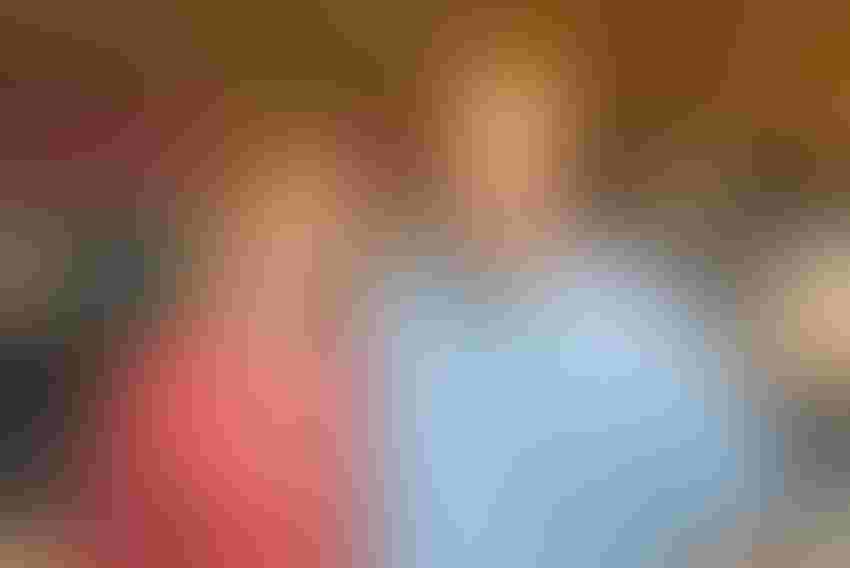 Connie and John Giesenschlag. "And it was all because of a hail storm."Shelley E. Huguley

As the bluebonnets confirm spring has sprung in the Lower Brazos Valley Bottom, rows of unharvested cotton are a dim reminder of unfinished business from the 2018 season. Continual rainfall, which began in September and has persisted through March and into April, delayed harvest and eventually forced some growers like John Giesenschlag, who farms near Snook, Texas, to abandon a portion of his potentially two to three bale cotton crop.

While Giesenschlag talked about missed opportunities, financial loss and the harvest frustrations of 2018, the veteran farmer was quick to say, he didn’t want their difficult year to be the focus.

“It’s been very challenging,” Giesenschlag admits. “But I’m pleased to do what I do. It’s a real privilege to be an ag producer. Not everyone gets this opportunity.”

Giesenschlag, who is about to begin his 51st growing season, rented his first 6 acres and purchased his first tractor at the age of 13. He says he can’t remember what he ate for lunch yesterday but can remember what he paid for his Farmall Super C tractor —$305. The landowner who leased him the land, had previously farmed it with mules, he recalled.

“I had to rent it on shares, thirds and fourths — that's the only way he would do it.”

Grain sorghum was Giesenschlag’s first crop. During harvest, he says the landowner, who he got along with, came to the field to watch. “We had to cut four rows and put it in a wagon for him and then we’d cut eight rows for me and that's how we did it.”

Since 1879, the Giesenschlag family has farmed in Burleson County, where John and his son R.J. now farm. Most of the land is still in the family, he says. R.J. is the sixth generation to farm the family land and his sons will be the seventh.

At age 64, as John rehashed the details of last seven months, he drove past a plowed field and optimistically pointed out, “That was standing in stalks until two days ago. We’ve made some real strides.” But then said, “In all we’ve talked about, there’s something I want to make sure to tell you.”

John began to recall a year a major hail storm came through his area, a time when no crop insurance was available.

“The hail storm hit on the seventh day of May,” he recalled. “I don't know why I can remember that date, but I lost the majority of my crop in about 20 or 30 minutes. I had a lot of contiguous land and it went straight through the middle of it. I had neighbors on the edges of the storm who had some damage and some who didn't lose anything, but on mine, there was nothing left — I was young and didn’t know what to do.”

With no county-wide disaster program, he replanted, though late, with the help of some neighbors. “We got to the end of that year, after a long, hard year, and had made a halfway decent cotton crop and then it started raining.

“We picked all the cotton but got to the end and owed more money than we had. I tried to decide what to do.”

The veteran farmer recalled talking to his banker, who said, “John, what do you want to do?” John replied, “I want to try to keep farming,” to which the banker said, “Then we’ve got to figure out how to get you some money.”

With relatively new equipment, John said he began to sell. “I sold the 4850 tractor and bought an old case tractor. I sold the 7100 planter and I bought some 71 flex planter units. I did that on everything with equity.”

As John began to liquidate and purchase used equipment, people began to say, “I wish I had known you were going to get rid of those cultivators,” or “I’ve been looking for something like that,” which brought the realization that not only was there a need for used equipment but for someone who could locate it, a service John decided he could provide.

“I always liked machinery, so I ended up buying used equipment and parking it on the side of the road,” he said. Eventually, his roadside business grew into a 4,000-square foot building that housed ABC Equipment and later the ABC Store. “We didn’t have an empire, but we had a relatively large, used-equipment business between Fred Luhn (his business partner), me and Connie.”

In his search for inventory, which ranged from shanks in the Texas Panhandle to spray fenders in Mississippi and Louisiana to livestock equipment from the Midwest to other pieces in the Mississippi Delta, Illinois and Iowa, John traveled many miles and met countless people on the way. “I got to see this great farming industry, from the Rio Grande Valley of Texas all the way to the Great Lakes.”

While choking back tears, John continued his story referring to an evening while driving down Interstate 35 to a monthly sale he had gone to “forever,” in Chariton, Iowa. He said he was thinking about all he and Connie had been through, how Connie had kept things together at home while he was on the road and James, the farm. As he thought about how much money they still owed, and he said he found himself thinking, “How are we going to do this?”

He said, that’s when it hit him. “I’m thinking about all of these things that have happened and I begin to realize how much of America I’ve gotten to see and how much my life has been blessed. (long pause)

“And it was all because of a hail storm.

“If you don't think God directs your life, just look at it some time. It's a humbling thing. It really is. It was a changing point in my life when I realized how little control I had. Everybody has their own things they talk about when they make a good crop and I'm not any different, but you want to be proud of it and think, ‘I did this.’ But it didn't come from us. We were just part of it.”

So as John was candid about his difficult year, it wasn’t the problems on which he wanted to focus, but on what God is up to in the midst.

“We’ve had a good life farming and I know there are difficulties and I sure don’t like this one this year,” but he says he never misses an opportunity to share his story and to be grateful for friends, family, life experiences and the opportunity to farm.