2020 is an example of how early-season nutrient deficiencies are showing up more often. Can adding sulfur and sidedressing nitrogen help? 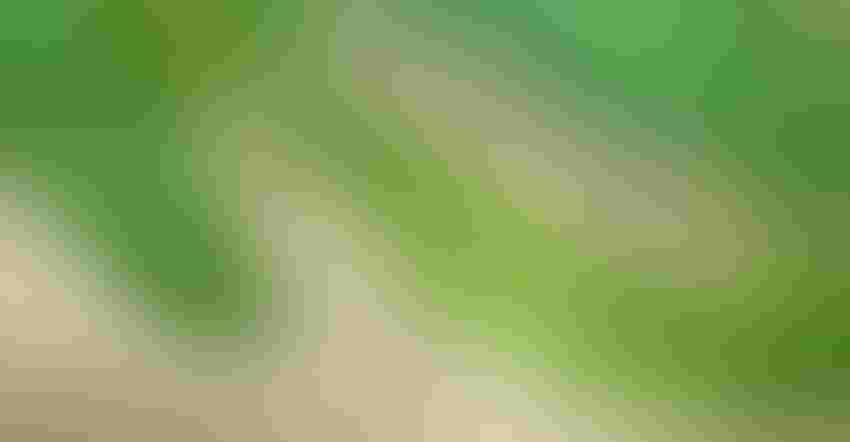 SEVERELY DEFICIENT: The most severe sulfur deficiency a farmer will see in corn likely will occur in fields with low organic matter after cool and wet conditions hamper bacteria and root growth. Courtesy of University of Delaware

Farmers are noticing more severe cases of yellow corn early in the growing season in recent years, and there are four factors that explain why, says Pioneer agronomist Matt Montgomery. Temperature, rain, organic matter levels and plant development all affect nutrient availability for the crop.

With cooler and wetter conditions in 2019 and 2020 compared to the 10-year average, early-season nutrient deficiencies have become more pronounced. Had temperatures picked up before June in the unusually cool spring of 2020, yellow symptomology would not have been as severe, Montgomery says.

Corn that’s yellowed on the bottom but green on the top is experiencing a nitrogen deficiency. Sidedressing N will make it more available for the plant, which will push growth and yield.

Corn with yellow stripes tends to be deficient in sulfur. It’s an early-season signal that goes away eventually as the crop greens up, so Montgomery says adding more sulfur in-season may not have a noticeable yield response.

He’s not ready to say every farmer he works with should apply sulfur, which is being deposited by the atmosphere at lower levels than it used to be, thanks to changing U.S. Environmental Protection Agency standards for coal power plants.

“We do think the day is coming when sulfur supply will become an issue because yields will surpass what is naturally supplied through rainfall and organic matter decomposition,” Montgomery says.

Montgomery recommends the growers he works with in central Illinois use strip trials on low-organic-matter soils to see if they would benefit from applying sulfur, as these areas are the most likely to show a yield response.

“We’re in this transitional period where we maybe don’t or maybe do need sulfur in our part of the Midwest,” he adds. “Only a strip trial is going to give you an indication that you need it right now. And that’s really the best way to figure out whether you need sulfur — more so than these yellow symptoms. They tend to show up just about every spring, though the symptomology was more severe this year.”

Here’s a closer look at the factors that affect a crop’s nutrient availability:

Temperature. Warm temperatures over the winter and higher-than-average rainfall in 2019 and 2020 led to denitrification and nitrogen loss, Montgomery says. He knows of growers who will likely increase nitrogen 30 to 40 pounds on acreage they know is continually deficient. Others are investing more in sidedressing applications.

“There are some pretty critical periods of your development that are happening after around five weeks. Plants are figuring out the number of kernels they’ll set,” Montgomery says. “I don’t want N deficiencies to show up then or thereafter. I want to try and head those off. If I don’t, ear length is going to start to be nubbed away, and I want to avoid it. Once that happens, it’s almost too late.”

Sulfur is deposited into soils from the atmosphere by rain, but when it comes to the sulfur taken up by the crop, much is sourced from decomposition of organic matter in the soil. The bacteria-driven process of converting sulfur to what the crop takes up, sulfate, slowed down markedly in 2019 and 2020, thanks to cooler conditions in the spring.

Rain. Moisture also affects nutrient deficiency, as rainfall transforms nitrogen into an easily lost form that can leach from the soil or gaseous forms that can be lost to the atmosphere. In the case of sulfur, moist conditions throughout the spring in 2019 and 2020 meant there wasn’t much oxygen present to aid bacteria in turning sulfur into sulfate.

“They require some oxygen, yes for themselves, but they also need it to make this process happen,” Montgomery says. “So when we get saturated soil conditions, that means less oxygen, which means it slows down the bacteria’s process of turning sulfur to sulfate.”

Organic matter. Elemental sulfur is tied to organic material in the soil, which varies by soil type. The more organic matter there is, generally, the more sulfur is available for bacteria to convert into sulfate.

Even if bacteria are slowed down by rain and cool temperatures, high-organic-matter soils still result in a greener stand because “there’s just more sulfate available to the crop,” he adds.

Montgomery says he visited a grower this year and noticed an interesting trend: Lowland corn sitting in a portion of the field that in 2019 was flooded was green, whereas corn atop hills where the soil is lighter in color had sulfur deficiency symptoms.

“We have a little bit more organic material in those lower portions of the field. Organic material was deposited there when flooding occurred, too. Whereas the upland soil — these lighter-colored soils — didn’t have as much organic material,” Montgomery says.

Plant development. With more growth above ground supported by only a shallow root system, corn crops early in the growing season struggle to access nutrients.

“That will change, but in the spring, sulfate leeches down a little bit lower into the soil profile because it’s negatively charged. Water and rainfall move it out of the zone that those shallow roots are initially, and that leads to symptomology that eventually greens up once the roots are more established,” Montgomery says, noting the symptoms don’t necessarily mean a yield penalty.

Cooler temperatures in the spring of 2020 meant that, in addition to slowing down sulfate-producing bacteria, root development was also slowed.

“If we had seen, let’s say, a lot of warmer conditions earlier, we may have bypassed nutrient deficiencies pretty quick, to where we weren’t going to catch people’s eyes as much,” Montgomery concludes. “But because we sat in 50 to 60 degrees [F] with overcast periods for a long time, until June, root development slowed down. Which means those root systems stayed shallow, while the actual sulfur supply was just a little bit lower in the profile for those roots to hit.”