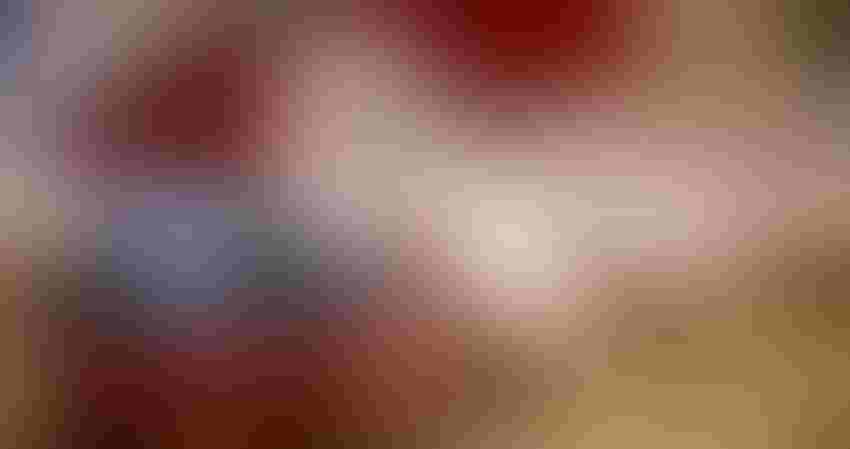 Chicken growers in Arkansas need chicken litter to remain as dry as possible so it can be sold in neighboring states that are not considered “nutrient surplus areas.”UA System Division of Agriculture photo by Fred Miller

It may sound counterintuitive, but chickens can stay cooler in hotter environments if it is a dry heat. They just need a little spritz of water every now and then, and a breeze to create a windchill effect.

With water conservation in mind, researchers at the Arkansas Agricultural Experiment Station continued decades of research in 2021 to fine tune a method of direct-cooling chickens with low-pressure sprinklers in tandem with traditional cool-cell pad systems and ventilation fans.

“The 2021 trial aimed to determine the effect of sprinkler technology in combination with cool cell systems on achieving broiler performance during hot weather,” said Yi Liang, associate professor of biological and agricultural engineering and faculty with the Center of Excellence for Poultry Science within the University of Arkansas System Division of Agriculture.

However, a major hang-up about sprinkler adoption has been a “misconception” that chicken sprinklers make the poultry litter too wet to sell as fertilizer. But researchers have seen the opposite.

Chicken growers in Arkansas need chicken litter to remain as dry as possible so it can be sold in neighboring states that are not considered “nutrient surplus areas.”

Poultry production in Arkansas generates about 1.3 million metric tons of litter a year, most of it being concentrated in the northwest region of the state, according to the Center for Agricultural and Rural Sustainability (CARS). Shipment of poultry litter to neighboring states for use on farms has helped mitigate the surplus phosphorus from Northwest Arkansas watersheds.

Sprinkler systems work by intermittently spraying a small amount of water directly on the birds to produce a windchill effect when ventilation fans pull air through the building, Liang said. The sprinklers are not turned on until the birds reach a certain weight and take up more space. This keeps most of the water from the sprinklers off the ground.

The challenging part of the adoption is the awareness of two things by growers, Liang said. There is “a misconception that sprinkling water into the house will wet the litter,” she said. A humid environment created by cool-cell pads does not allow the birds to cool themselves as efficiently, she added.

Broiler houses stay slightly hotter and drier when operated with chicken sprinklers compared to cool-cell pad houses, Liang said. The humidity produced by cool-cell pads can saturate the air with relative humidity greater than 70%, which is counterproductive to birds cooling themselves by breathing, she explained.

Water conservation and better feed conversion ratios were found to be the primary benefits of the sprinkler systems in chicken houses in both the 2009-2011 and 2021 studies. The research showed that sprinklers make chickens get up and move around more. Sprinklers help the birds release body heat and encourage visits to the feeders, said Tom Tabler, poultry extension professor at Mississippi State University and a collaborator with Liang on the 2021 study.

Throughout three summers and five flocks raised between 2009-2011 at the Applied Broiler Research Unit at the Savoy Research Complex in Northwest Arkansas, sprinkler cooling systems used on average 67% less cooling water than the cool-cell pad systems. Liang noted that the percentage of water savings ranged from 50% to 80%-plus based on the weather, the program of the cool-cell pad system and the age of chickens to be marketed.

Cool-cell pad systems and associated equipment use a significant amount of water, Liang noted. Hourly water use by cool-cell pads in a 40-by-400-foot broiler house ranges from 100 to 280 gallons per hour as the ambient temperature rises from 85 to 98 degrees on a typical summer day in the South, experiment station studies show. Cooling is needed mostly for summer flocks marketed from May to October in the U.S., Liang added.

Tabler and Liang co-authored a study on chicken sprinklers in 2012 based on the 2009-2011, five-flock, three-summer study. The results were published as a peer-reviewed article in 2014 by the American Society of Agricultural and Biological Engineers.

Proper use of sprinklers

Studies by the Division of Agriculture have been conducted on chicken sprinklers since 1995. In 2021, Liang and Tabler further investigated the water conservation aspect of chicken sprinklers as part of a National Institute of Food and Agriculture (NIFA) grant awarded in 2019. The $9.95 million grant is co-directed by Walter Bottje, an experiment station poultry science physiologist.

The 2021 study took place in the spring and summer of 2021 at two commercial broiler houses at the Savoy Research Complex’s Applied Broiler Research Unit. Each house in the 2021 study was equipped with two lines of commercial sprinklers as well as the conventional evaporative cool-cell pads and a tunnel ventilation. The key management issue of cooling in hot weather is to properly position the cool-cell temperature set points so that sprinklers handle cooling the birds before the house temperature approaches 90 degrees, Liang writes.

The set point of a cool-cell pad system should be about 21 degrees above the house set point to allow sprinkler activation under a drier thermal condition, Liang added in her report.

Positioning the temperature set-points of the cooling-pads 21 degrees above the house temperature set points allowed the sprinkler system to operate for 26 out of the 33 days. Cooling-pads were operated for 15 of the 26 days with short wetting cycles, when ambient temperature was mostly above 90 degrees.

“Water conservation is a major emphasis for the poultry industry today as it strives to become more sustainable and lessen its carbon footprint,” Tabler said. “Climate change and heat stress are challenges to these sustainability efforts.

“Cool-cell systems, while effective, require large amounts of water and reduce the bird’s ability to cool itself through respiratory evaporation. However, sprinkler systems offer cooling water conservation of over 50% compared to a cool-cell system while maintaining production performance without sacrificing flock performance,” Tabler said.

“Taken together, our data represent the first evidence that surface wetting alleviates systemic and intracellular stress induced by heat stress and preserves the intracellular energy status, which, in turn, may result in improved broiler well-being and growth performance,” Dridi wrote.

The same study showed no significant difference in core body temperature in birds raised with sprinklers and cool-cell pad systems. That study also showed daily mortality and bird market weights in the sprinkler and cool-cell houses were not significantly different.

A focus of this supporting NIFA grant, titled “Empowering US Broiler Production for Transformation and Sustainability,” is on improving water use efficiency either at the bird level or by the housing systems. Funds from the grant help further optimize the sprinkler systems for broiler production, Bottje said.

This research was also funded in part by Weeden Environments of Woodstock, Ontario, Canada.