A cow-calf specialist suggests inexpensive feedstuffs for meeting nutrient requirements of the cow and calf. 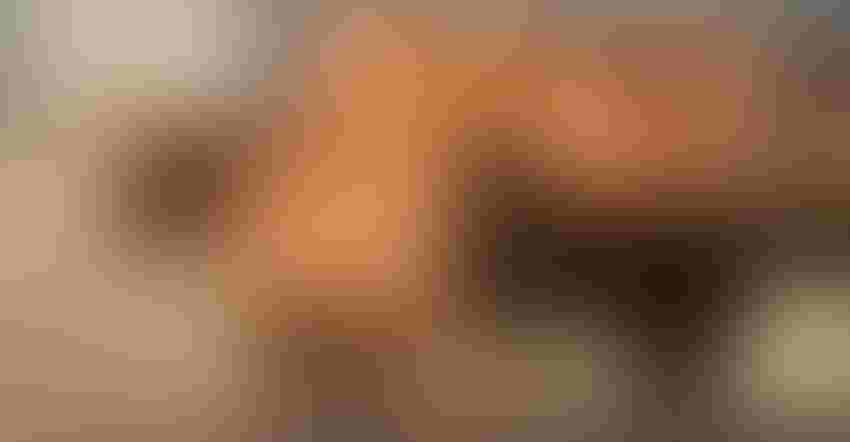 CONFINEMENT CONSIDERATIONS: When you are providing all of the nutrients for a cow-calf pair in confinement feeding situations, you can’t just wing it. You have to know their nutrient requirements, and make sure your ration is meeting them.Farm Progress

Confinement feeding may be an alternative as cattlemen face the tough decision between feeding or herd liquidation.

Karla Wilke, professor and cow-calf and stocker management specialist at the University of Nebraska Panhandle Research and Extension Center in Scottsbluff, says proper management considerations and taking advantage of feedstuffs opportunities can make for a healthy herd and bottom line.

In addition to her research experience as a cow-calf specialist since 2009, she and her husband, Todd, have an integrated farming beef cow operation where they run 80 spring-calving cows in partial confinement, and 80 fall-calving cows in full confinement.

She shared some of her research and on-farm experiences during a recent UNL BeefWatch webinar.

“I don’t believe there is really any one right way to do a confinement system,” Wilke said. “I feel they all look a little different based on what you have to work with.”

Wilke said a goal should be “limiting the actual amount of feed, but having it high enough in nutrient density that it still meets their needs. So that’s what becomes pretty important for the economics.”

She’s quick to point out that not all animals in the feedlot are created equal, and they have different nutritional requirements: gestating cow vs. lactating cow, and cow vs. calf.

With that knowledge, cattlemen then must match those needs that available feedstuffs provide.

“Sometimes producers will say, well, I save my best meadow hay for when my cows start calving. And then I increase the distillers-based cubes,” Wilke said.

Going back to the data she provided, that perceived high-quality hay and about 3 pounds of distillers grains fall short of meeting the nutritional needs of a cow in early lactation.

“That may work out OK, if that cow is in really good condition, so she’s got some condition to give,” Wilke said. “And then maybe in three weeks or so, she’s going out to green grass, and so she’ll be on an increasing plane of nutrition. If we look at what is provided in grazed grass in June, for most of Nebraska, we see that she probably is not only meeting her needs for early lactation, but maybe even a little extra.”

The only problem with that scenario is for cattlemen and their cows that are in a confinement system, those nutrients need to be provided, especially for those cows in early lactation.

To manage those cows going from gestation to lactation, Wilke provided an example diet of 7 dry matter pounds of ground cornstalks; 6.3 DM pounds of wet distillers grains; and 10.5 DM pounds of corn silage — a diet that provides 17 pounds of TDN and 3 pounds of CP while providing only 23.8 pounds of DM, or 1.98% of the bodyweight of a 1,200-pound cow.

“She will definitely clean this up, and will be cheaper than feeding her ad lib,” Wilke said.

Especially in times of drought, she suggested to “really evaluate the feed costs versus value of that gain. Calves are worth a lot right now, but feed costs are awful.”

Wilke is a fan of silage, as she said wet feed can increase poor feed utilization while increasing nutrient density. Other alternatives cattlemen should explore are wet distillers, sugarbeets, beet pulp and wet corn gluten feed that in addition to supplying moisture also add protein, energy and some minerals.

“Be an opportunist, look for some of these feedstuffs,” she said. She had the good fortune of the misfortune of a nearby sugarbeet plant that had beets rotting on the pile, and they were chopping them up. The Wilkes were able to buy those beets, mix them with wheat straw and have a feedstuff similar in nutrient value to corn silage, “and feed that much cheaper.”

Other considerations are summer annual forage silages such as sorghum sudangrass hybrids, which can be cheaper to produce than corn silage, though providing less energy. Wilke said such forages can also be fed as hay if silage harvest is not an option. Another option is creating a forage “chain” by planting cool-season annuals in the fall, feed in the spring, and then follow with summer annuals.

“There’s a lot of different options,” she said. “I’m not here telling you this is the right way; I’m just hoping that you think through some things that will work for you.”

Although growing calves can eat the same diet as adult cows, Wilke said they would be better served to have access to a diet that better meets their nutritional needs.

She said that calves do not have a fully developed rumen until at least 84 days of age, so they “are going to need more digestible feed that moves through quicker, so that they can meet their nutritional needs.”

Wilke recommended making sure that calves do not have to compete with their mommas for feed. Acknowledging that most feedlots are set up for feeding larger animals, Wilke encouraged cattlemen to consider something as simple as providing lower bunks or creep feeders that allow calves to reach the feed.

“Sometimes we don’t think about water intake in the nursing calf,” she said, but “calves need water in the rumen to utilize the feed and grow the microbes. A calf that never reaches the water is not going to eat well and is not going to grow well.”

As an example, Wilke pointed to dairy research that in 70-degree weather, calves receiving 0.8 gallons of milk and 2.2 pounds of starter feed still drank 0.66 gallons of water each day.