Corn bears are pointing to what appears to be weaker weekly export sales here in the U.S., continued global competition from cheap feed wheat, increasing competition from Ukraine, along with continued talks of increased corn acreage in both Argentina and Brazil.

The bulls are quick to remind us that last week was a shortened holiday week with Labor Day closing businesses on Sept. 6, and that U.S. exports are still running aggressively ahead of last years export pace.

The bulls are also questioning the estimates that forecast more corn acres in both Argentina and Brazil. They believe even though it makes sense on paper, the South American banks might not be as willing as some think to increase lines-of-credit to roll out more corn acres.

Remember, there's a ton of political uncertainty associated with the new governments in both Argentina and Brazil. The banking sectors inside each nation are extremely nervous. Government programs and spending are clearly on the chopping blocks and no one seems certain about the direction of what happens next. Meaning the banks might be tighter than many are currently penciling into the equation.

Hence not much change to the previous rotation and perhaps not as many corn acres as some are forecasting. We need to pay close attention to this as more acres start to get planted. Bears are also talking about the uncertainty surrounding the Chinese corn market.

There seems to be more talk that the Chinese are sitting on a lot more corn than many have been forecasting. The fear is it might take the Chinese a lot longer to chew through their domestic bushels and to then take deeper steps into the corn importing waters.

Bottom-line, the world has a massive amount of corn right now! Just the thought of a record crop here in the U.S. being harvested and increased acreage in Argentina and Brazil, along with the glut of cheap feed wheat makes it extremely difficult to mount and sustain a rally.

As both a producer and a spec I still believe there is additional downside pressure in the days ahead. Stay patient... 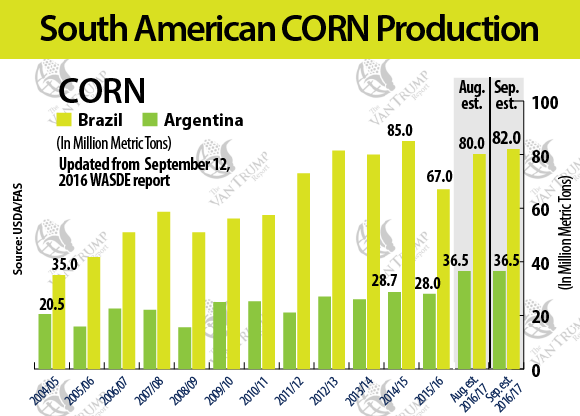