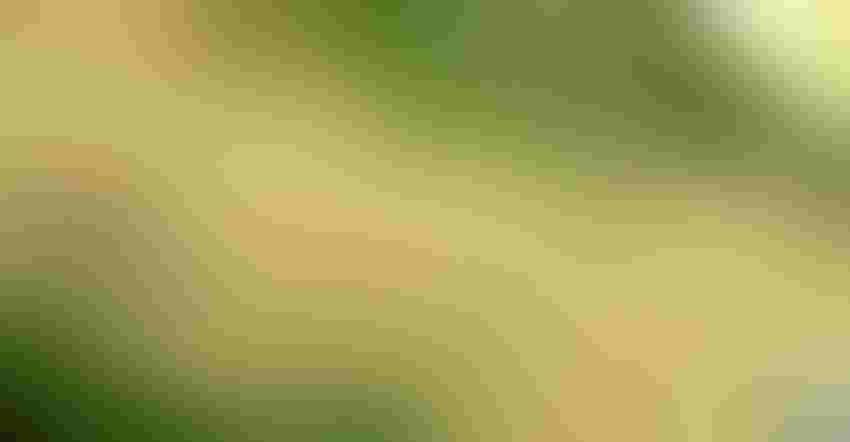 Grain sorghum in South Texas is at or nearing harvest and avoided yield damages by sugarcane aphids. But much of the state’s grain and forage acres remain in areas that have not yet experienced threshold numbers of the damaging pest.

Sugarcane aphids in Texas originally emerged in fields around Beaumont in 2013 and devastated sorghum fields. The pests reached the Texas Plains by 2015, where they caused widespread damage.

Producers in the Rio Grande Valley alone lost $31 million to the pest in 2015, according to an AgriLife Extension study. The same study showed producers avoided an additional $35 million in losses to sugarcane aphids by utilizing recommended scouting and spraying regimens once the pest reached certain numbers.

Since 2015, the negative impacts of the sugarcane aphid on Texas’ sorghum production have waned due to hypervigilant producers, the introduction of aphid tolerant sorghum varieties and higher numbers of beneficial insects that predate the pest.

Sekula said similar aphid activity occurred in her variety trials. But most fields in South Texas, at least those that received decent moisture from storm systems in April, looked very good and with no aphid populations of concern.

“Lingering populations may rebuild in later-planted fields or replants, but everything that is ready for harvest should be fine,” she said. “They may peak multiple times through November, and producers are aware of that and typically monitor and act when aphids near threshold.”

Crumley continues to see populations of sugarcane aphids in fields and in volunteer Johnson grass, but in no higher numbers than usual so far.

“Producers are having no trouble controlling them,” she said. “The complaints this season were related to the increased input costs related to applications.”

But nature has also done its part over the years, Reed said. Beneficial insects that prey on sugarcane aphids have adjusted to the cyclical rise and fall of infestations.

Sugarcane aphid numbers typically build in the Texas Plains in July and August as sorghum fields reach the boot stage, he said. Beneficial insects and tolerant varieties have been keeping numbers in check for the most part so far.

Reed said last year around 80% of sorghum acres in his region were treated with pesticides to protect the crop from the pest. It was the first time less than 100% of acres were sprayed since sugarcane aphids became a problem.

“Beneficials have really adapted and learned to jump on them,” he said. “It feels like emerging pests can run rampant for two to three years before nature tries to restore a balance. So, beneficials coupled with hybrid sorghum varieties have really made a difference.”

The district experienced record drought and record high temperatures in May. Those dry, hot conditions continued. Recent rainfall events helped pastures and rangelands, and most areas were in fair condition. Soil moisture conditions were adequate in the majority of counties. The corn crop was trying to fill but fields were showing signs of stress. Corn conditions were deteriorating with plants on lighter texture soils showing leaf firing from the extreme heat and dryness. Hay baling operations were wrapping up a second cutting and yields looked light. Stock ponds were drawing down and water restrictions were starting. Sorghum was heading out and looked decent. Cotton started to flower, and the crop looked average. Pastures were in fair condition, but livestock looked to be doing well.

Small amounts of moisture were received. Temperatures were getting hotter. High winds caused some damage to buildings. Livestock producers were still dealing with drought conditions and worsening rangelands and pastures. Wheat was mostly harvested. Dryland wheat in Wilbarger County produced 11-13 bushels per acre with one field producing 40 bushels per acre. Irrigated fields produced around 50 bushels per acre. Cotton plantings continued and were picking up as the deadline approached. Fields were dry, and sand was blowing in high winds.

Hot and dry weather conditions continued, and soil moisture was in short supply for all crops and pastures. Corn was drying down fast, and yields were expected to vary significantly. Cotton was still hanging on and setting bolls. Cotton needed a good rain to help set decent bolls. Rangelands and pastures were drying up fast. Hay producers were reporting low to zero hay yields. Most producers were feeding hay and supplements to cattle. Livestock were showing signs of condition loss. Livestock prices were holding steady. Good runs of cull cows and early weaned calves were hitting the auctions.

Most of the district was experiencing drought stress. Soil moisture conditions were short to adequate. Hay production was in full swing. Low amounts of rainfall and fertilizer applications resulted in yields much lower than normal. Pasture and rangeland conditions were fair. Feeder cattle prices were lower, while slaughter cattle prices were higher. Livestock were in fair to good condition. Fertilizer prices remained high and were a great concern to producers.

A few scattered showers delivered some moisture but not enough to turn irrigation off. The forecast was hot and dry, which was bad for all aspects of agriculture. Cotton planting was in full swing. Sorghum was being planted behind failed cotton. Corn was in fair to good condition. Peanuts were in fair condition. Winter wheat, pastures and rangelands were in very poor to poor condition.

The district received scattered heavy rainfall and hail. Topsoil moisture levels improved. Soil moisture levels were short to adequate. Some wheat, cotton and corn acres were destroyed. Wheat harvest should get underway as soon as fields dry enough to enter. Yields were expected to be low. Grain sorghum planting should begin soon. The rains helped rangeland and pasture conditions, so most supplemental feeding of livestock ended. Overall, crop, rangeland and pasture conditions were poor to fair in nearly all counties.

Soil moisture remained short to adequate for most counties. The weather was hot and dry except for a few rain showers. Corn and soybeans were in excellent condition over much of the area. Corn tasseling was increasing in most fields. Soybeans were in good condition but growing slowly. Wheat harvest was progressing with the dry weather. Many larger fields were being harvested. Summer grass growth slowed, but livestock and forages were still doing well across most of the county. No insect pests were threatening forage crops, but flies and other parasites were increasing rapidly with the warm weather.

Extremely high temperatures, high winds and no moisture were taking a toll on newly emerging cotton fields. A severe dust storm left many fields with tattered leaves and sand burn which set the late crop back even further. Most farmers were having to replant. Recent moisture helped green up in pastures.  Corn was beginning to tassel and with the heat pollination is in question. Watermelons were doing quite well. Pecans appeared to be shedding some nutlets. Pastures were bare of any grass, and ranchers continued to supplement livestock diets heavily. Wildlife was receiving supplemental feed as well. All wheat was harvested, but yields were light. There were reports of dead trees.

Hot and dry conditions continued. The rain a few weeks ago helped improve managed pastures. Small grains harvest was complete. Several producers planted summer annuals that had emerged but needed rain. Cotton was being planted, but dryland acres had very little chance of emerging. Livestock producers continued to cull herds, and some were selling out.

Hot, dry and windy conditions continued with no measurable precipitation reported. Temperatures were unusually hot for this time of the year with daily highs reaching over 100 degrees. Corn harvest was complete with very low to no yields reported. Sorghum fields were showing signs of drought stress. Pastures continued to decline, and very little hay was being made. Water levels in some irrigation wells were starting to drop, and some systems were not meeting crop needs. Rangeland and pasture conditions were progressively worsening with the lack of moisture and rising temperatures. Supplementation of livestock continued. Whitetail deer were starting to produce fawns. Very few quail pairs were being seen.

Weather was hot and dry. Northern and western parts of the district reported very short soil moisture levels. Eastern and southern areas reported short soil moisture levels. Multiple counties reported 110-degree days. Some row crops that received recent rains improved while others continued to decline due to drought. Potato harvest continued. Peanut planting was in full swing and should be complete soon. Corn fields were in the dough stage to dry-down phase. Cotton looked stressed and was in full bloom and setting small bolls. Grain sorghum was maturing, but the late-planted fields had some head worm and midge infestations. Water districts were planning to cut off all irrigation from the Rio Grande River and Lake Amistad. Growers with irrigated crops like watermelons, cantaloupes and Coastal Bermuda grass were concerned over possible water rationing. Sesame fields looked good. Citrus and sugarcane were irrigated. Rangeland and pasture conditions continued to decline, but conditions were poor to good overall. Native grasses bounced back well in some areas following recent rains, but some areas looked bare. Mesquite trees started to put on beans. Irrigated cotton was germinating. Cattle producers continued to provide supplemental feed. Ranchers were culling deeper, and some were liquidating herds. Cattle prices remained fair. Hay grazer emerged but will need rain soon. Some hay fields were being cut, with most expected to be cut and baled soon.