Maximizing soybean yield starts with minimizing stand loss and consequent replanting costs due to seedling diseases such as Phytophthora and Pythium. 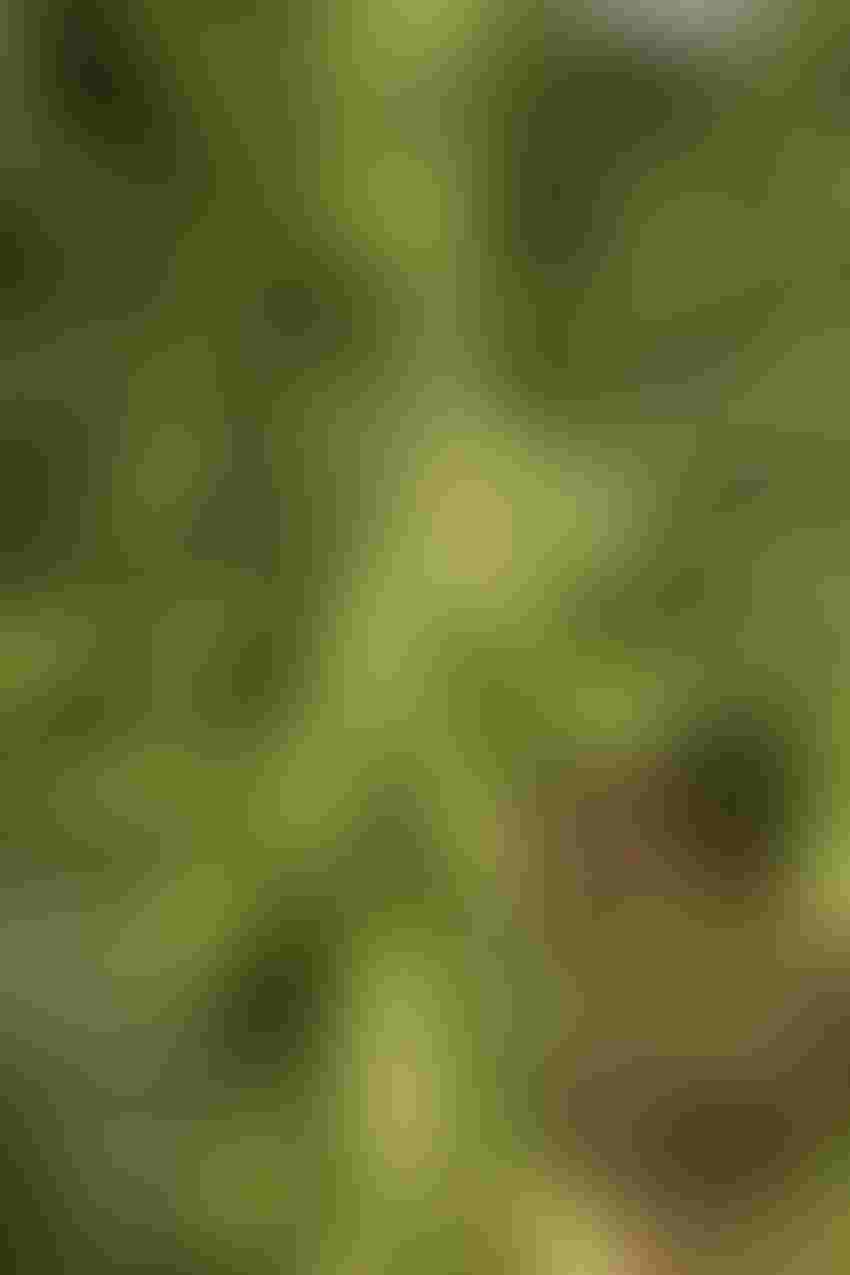 With commodity prices straining all aspects of grower operations, there is more pressure than ever to produce a productive plant from every seed planted.
Maximizing soybean yield starts with minimizing stand loss and consequent replanting costs due to seedling diseases such as Phytophthora and Pythium. These diseases remain tricky issues for growers, especially with input and seed costs at a premium.
Research supports that applying seed treatments is an important start in setting the seed up for health. The solid foundation provided by a healthy, protected seedling is the first step towards maximizing the yield potential.
In fact, seed treatment use—especially insecticide and fungicide treatments—may help avoid replanting. The University of Wisconsin-Madison paper “Think Twice Before
Replanting Soybeans” explains that seed treatments are a best practice for increasing initial plant stands by an average of 20 percent.
This special report seeks to drive awareness of Phytophthora, Pythium and Sudden Death Syndrome (SDS) by highlighting some of the key findings from recent university research in areas where the endemic pathogens are most prevalent. It also aims to help readers better understand the magnitude of the problem. The following will be discussed:
• The prime conditions in which Phytophthora, Pythium and SDS thrive
• How Pythium and Phytophthora resistance is developing to seed treatments containing metalaxyl and mefenoxam
• Recommended resistance management strategies for growers

What are phytophthora, pythium and SDS? And what ar ethe options for control?

Over the last 11 years, Phytophthora has suppressed U.S. soybean yields resulting in an estimated 500 million-bushel loss.3 Today, Phytophthora sojae remains a top threat for
growers to manage worldwide and is the No. 1 disease that impacts soybean yields. The threat that Phytophthora poses to soybean yields has continued to develop in recent years. New data from the United Soybean Board demonstrates the aggressive nature of the soybean disease, identifying Phytophthora as among the top robbers of soybean yield.

Similar to Phytophthora, disease caused by Pythium spp. has caused serious economic losses, with scientific documentation dating back to the early 1900s. Pythium causes
seedlings to rot prior to emergence, die off suddenly after emergence and/or have weakened roots.
One of the biggest challenges for growers is the rapid speed at which Pythium attacks the soybean seed. The disease pathogens live in the soil, waiting for the right moisture and temperature conditions to activate. Pythium can strike seedlings within 90 minutes of planting.
Phytophthora and Pythium are classified as oomycetes and are among the most devastating plant pathogens year in and year out.8 Oomycetes are taxonomically distinct from other disease pathogens in soybeans.9 Unlike Phytophthora and SDS, which have distinct symptoms, Pythium can be difficult to diagnose, often killing very young seedlings or leaving bare patches with the seedlings never emerged.

SDS is a fungal disease caused by Fusarium virguliforme that infects the soybean roots soon after emergence. However, visible symptoms are not typically evident until flowering begins, after which there are no curative treatment options. The first visible symptoms of SDS are mottling or mosaic patterns between the leaf veins, which eventually turn to
brown tissue and necrotic lesions. The root rot phase can occur even in the absence of foliar symptoms, meaning that damage can quietly accumulate in a field that appears to be healthy.
There is ample evidence which points to an interaction between SDS and Soybean Cyst Nematode (SCN). The onset of SDS foliar symptoms and the severity of foliar symptoms are made worse when SCN is present. SCN is generally present in fields with SDS symptoms and the causal agent of SDS, Fusarium virguliforme, has been isolated from SCN cysts and eggs.
While SDS is a devastating disease, its occurrence is far more sporadic than Phytophthora and Pythium. Pythium is an every-field, every-year problem. Pythium and Phytophthora can be managed effectively by using dual mode of action products applied as seed treatments.
Many university recommendations for SDS management focus on cultural practices and soybean variety selection.10 In contrast, Pythium cannot be managed by soybean variety selection, but cultural practices such as delaying planting can sometimes lessen disease development. Unfortunately, delaying planting to manage either Pythium or SDS also results in lower yield potential.

Dr. Alison Robertson, extension field pathologist at Iowa State University, has been researching the rise of Pythium. The frequency of these diseases is an increasing
economic threat among those that impact soybean yields.

Phytophthora, Pythium and SDS at a glance

Dr. Alison Robertson, extension field pathologist at Iowa State University, has been researching the rise of Pythium. The frequency of these diseases is an increasing
economic threat among those that impact soybean yields.

“One of the things we’ve learned over the past five years, based on research, is that [Phytophthora and Pythium] are a lot more significant than we originally thought,”
Robertson said. “And especially these cooler winters and springs we’ve been having (are) helping this pathogen survive.”
By understanding the primary conditions for soybean seedling and root rot disease advancement, researchers like Robertson are able to recommend new technologies for improved disease management.

The consistent presence of phytophthora and pythium

Phytophthora and Pythium live in the soil almost indefinitely, merely waiting for the right combination of environmental factors in order to infect soybean seeds and seedlings.
Advances in planting technology allow growers to plant more quickly. While this is optimal for maximizing yields and working around challenging spring weather events, it’s also possible that a larger percentage of growers’ total acreage is subject to unfavorable weather during critical germination and seeding development stages. For example, following a favorable five day planting window, a grower gets 80 percent of his or her fields planted; then weather turns out wet and cold for a week, exactly the type of conditions favorable to Pythium infection.11

Midwest growers have long reported that Phytophthora and Pythium are found in many of their fields, with damage most pronounced under cool and wet conditions. However, new
research has confirmed that the species diversity of Pythium also exists in warmer soils, and the problem is growing.
Dr. Anne Dorrance, professor of soybean pathology of The Ohio State University (OSU), explained that, “In a given field, you can have up to 8 different species of Pythium. And all can
have a different temperature profile, so you always have a species that can infect the placan occur rapidly after planting and follow a single heavy moisture event after planting.
That same Iowa State research found that the most common factor triggering an SDS infection and symptom expression was not just a period of high moisture conditions after planting, but also a prolonged period of high moisture—with large rain events occurring in June being the most important. From 1993 to 2011, there were only three years of high SDS incidence compared to five years of low incidence and 10 years of low to moderate pressure.

Conversely, Minnesota’s spectrum of Pythium species is far greater than what was previously thought by researchers, with at least 30 species identified in recent years. This is a detriment to Minnesota soybean growers, who now like Iowa growers have to focus on more than one species to control. Dr. Jim Kurle, plant pathologist at the University of Minnesota, recently
found four of these Pythium species to infect both soybeans and corn, making managing crop rotation challenging.
In his article “Once Forgotten, Pythium Back on the Radar,” Kurle also discovered that many Pythium species are actually more active in warmer temperatures.
These findings provide some answers to growers and researchers who have seen root rot occur under warmer conditions

Additionally, a new species of Phytophthora, P. sansomeana, is creeping up in the Midwest and was detected for the first time in Wisconsin soybeans in 2012. The paper “New Phytophthora spp. causing root rot in soybean in Wisconsin” explains that this species has been reported on corn in Ohio and soybeans in Indiana.
Among the paper’s recommendations are to use fungicide seed treatments to reduce the incidence of Phytophthora root rot on soybean.

Metalaxyl insensitivity on the rise

Fungicides have long transformed the way crops are grown as well as growers’ expectations of performance. When first launched in the 1970s, fungicide products with the active ingredient metalaxyl changed farmers’ expectations for control of oomycete diseases including Phythophthora and Pythium. Metalaxyl was quickly adopted because of its impressive properties, including protection of new growth.15 Due to its systemic activity against this important group of pathogens, metalaxyl is used worldwide on a variety of crops today, including soybeans.
For U.S. corn, soybeans and wheat, every seed treatment package contains either metalaxyl or mefenoxam (the optically pure stereoisomer of metalaxyl) to combat Pythium.
This practice means that a high percentage of production acres rely on the same chemistry for Pythium management, and resistance has progressed in areas with high disease pressure such as Illinois, Iowa and Minnesota.

In Ohio, seed treatment products containing just metalaxyl are being reported as ineffective on Pythium spp. A new OSU study demonstrates that the traditional way of treating seed with one mode of action (MOA) against a diverse range of Pythium species will no longer be sufficient to protect soybean yields. Dorrance conducted research finding the nine varieties of Pythium species from the same problem fields were highly insensitive to metalaxyl, indicating that tackling today’s Pythium species calls for a wide combination of active ingredients.

In her newsletter “Cold Spring Rains Brought Perfect Conditions for Pythium in Ohio and a Few More Surprises,” Dorrance states
“Seed treatment with only one active ingredient for Pythium spp. will not provide protection for the wide range of diversity that is now contributing to this disease complex. … those fields with a history of replant and stand establishment issues should focus on treatment that has a wide combination of active ingredients.”

Independent research trials validate that combining metalaxyl with the new mode of action of ethaboxam—the first new MOA in more than 35 years—offers better protection against a wider
spectrum of Phytopthora and Pythium species.
The diversity of Pythium species means Pythium can cause stand loss and damping-off under a variety of environmental conditions. According to trial data, adding ethaboxam to metalaxyl improved performance on several Pythium species including sylvaticum, irregulare as well as Phytophthora sojae, P. dissotocum, P. torulosum.17
The pairing of ethaboxam and metalaxyl delivers superior seed protection because this combination alone provides consistent protection against the broadest spectrum of Pythium species as well as Phytophthora including metalaxyl-insensitive Pythium species under a wide range of environmental conditions. This is good news for soybean growers looking to optimize yields.
One product on the market with multiple MOAs for soybean oomycete disease control is INTEGO™ SUITE Soybeans. INTEGO SUITE is the only seed treatment with ethaboxam, a new MOA against Phytophthora and Pythium.
In a 2013–2014 Independent Professional Seed Association “Soybean Seed Treatment Yield Study” including trials at 22 Midwest and Mid-South sites with two varieties each, INTEGO SUITE increased yield over the untreated check 75 percent of the time. By comparison, a commonly used package with a single active ingredient for Pythium only increased yield over the check 59 percent of the time.18

Phytophthora and Pythium are important pathogens to protect against in order to ensure
establishment of a healthy stand early in the soybean season. Factors for the best yield
potential—early planting, moisture and temperature—are also best for the pathogens that can
attack seeds and seedlings every year.
With shifting cultural practices, new Phytophthora and Pythium species being found and
insensitivity to current fungicides increasing, it is becoming apparent that additional tools
are needed. Seed protection utilizing the best combination of products will protect against
Phythophthora and the broadest spectrum of Pythium species, as well as maximize stand and
yield potential. SDS isn’t a year-in, year-out occurrence, so choosing the most beneficial seed
treatment with multiple MOAs to protect a crop every year is beneficial to any crop’s health.
To learn more about Phytophthora and Pythium, visit fightsoybeandisease.com.