During a lively question and answer session, the three winners shared their production successes and strategies. All thee stressed the benefits of conversation tillage and the need for a good fungicide program. 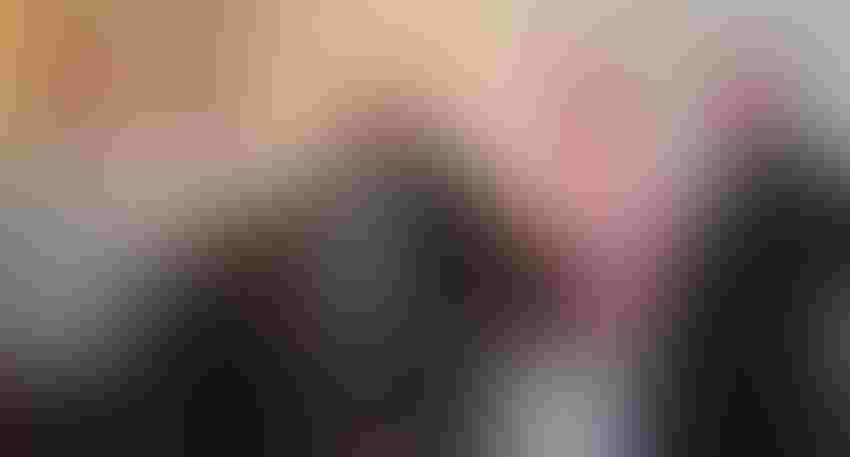 Winners of the 2015 Peanut Profitability Awards were recognized for the quality and quantity of their peanut crops and their successful production practices during the 17th annual Southern Peanut Growers Conference at Callaway Gardens in Pine Mountain, Ga. July 25.

“The aim of the Peanut Profitability Award has been to recognize those growers that have shown amazing adaptability in the face of change and who have continued to produce profitable crops,” said Forrest Laws, director of content for Farm Press at a breakfast honoring the three winners.

“The Farm Press Peanut Profitability Awards Program began with the first ever Southern Peanut Growers Conference and the two have grown together over the years,” Laws said. “This year marks the sixteenth class of Peanut Profitability winning growers, and each class continues to impress with their innovative techniques of improving bottom line profits.”

Laws said the three farmers have overcome the perils of farming while improving their profitability. “When you say to someone that this grower was a recipient of the Peanut Profitability Award it means that you are standing in the presence of greatness, and that these individuals are very special growers,” Laws said.

Program adviser for the awards is Dr. Marshall Lamb, research leader with the National Peanut Research Laboratory in Dawson, Ga. Lamb has designed a measurement tool used by growers in determining production efficiency. The awards recognize growers who produce the highest yields at the lowest cost per acre.

During a lively question and answer session with the breakfast audience, the three winners shared their production successes and strategies. All thee stressed the benefits of conversation tillage and the need for a good fungicide program.

“The biggest advantage I see with conservation tillage is soil health,” Cochran said. “It’s a huge benefit to the overall soil fertility level,  just better soil health. I’ve been farming 30, 40 years and never until the last three years or four years of harvesting peanuts did I ever find earth worms when I would get down to pull a weed off a blade or do something with the soil, I’d actually see earth worms in the peanut field at harvest time so that has to be a huge benefit.”

Both McClam and Reed said that strip tillage has kept them in the peanut business.

McClam said by using strip tillage, washouts have gone away, but the biggest advantage he sees is a reduction in fuel costs. “I couldn’t farm without strip till,” he stressed.

As for Reed, strip tillage has eliminated wind erosion issues on his farm. He is now able to graze cattle on his fields until the day he sprays burn down herbicides and then come back two weeks later and plant his peanut crop. “I’m not sure that I could even be in the peanut business today if it hadn’t been for strip till and the improved technology of all the chemicals,” Reed said.

Last year, Cochran said he used a three-spray program with DuPont’s Fontelis fungicide. “This year, if we have heavy white mold pressure like I think these high temperatures are going to bring, we may very well be on a third Fontelis application this year as well. If not, it will be Headline later in the season.”

Planting 100 percent of his acreage to the variety Bailey, McClam said he applies Fontelis at 60 days and then applies Syngenta’s Bravo fungicide at 80 days. “We’re doing a lot better job at scouting to make sure we are spraying at the right time,” he added.

McClam noted that he did a trial on his farm last year with Wayne Nixon, Severn’s agronomist, where a combination of Abound, Folicur and Bravo were used at his last fungicide application and it provided a yield increase so he plans to use that combination all away across his farm this year.

Reed said he now uses a one year in four year rotation with his peanuts which has allowed him to reduce his fungicide applications compared to the rotation system he used in the early 2000s of two years on and two years off. He now uses a combination of Folicur and Headline as well as some Bravo with Tilt which has helped him work out the sclerotinia blight issues he had in his earlier rotation pattern. “The rotation has been the biggest improvement,” he noted.

The Peanut Profitability Award winners were asked where they saw the future of the peanut industry in light of the new farm bill.

McClam said he is concerned about the new farm bill because his part of South Carolina is relatively new to the peanut industry and doesn’t have the base and high yields that other peanut producing states such as Georgia enjoy.

“We have some farmers in my community that when they go to the mail box this year, they are going to be pretty disappointed because where we are on yield and with our three and four year rotation, we just haven’t had  time to build a lot of base,” McClam said.

Reed noted that he is fortunate because he has a good base on his farm. “I would rather sell peanuts at a good price than have the base payments, but the base payments are going to be very instrumental in keeping me above water,” he added.

Cochran said he is concerned that the new farm bill will create an oversupply of peanuts that will be hard to sell. “I think one thing this program is going to do is make good marketing people out of the shellers and manufacturers because there are a lot of peanuts that are going have to be moved. We’re fortunate in Worth County that we have good yields, we have a good base and a long history of growing peanuts. I’ll be the first to say that I would rather sell to a market price than I would to a government price.”