Peanut producers have no shortage of issues going into the 2015 production season, including tight budgets and a possible shortage of some fungicide materials. 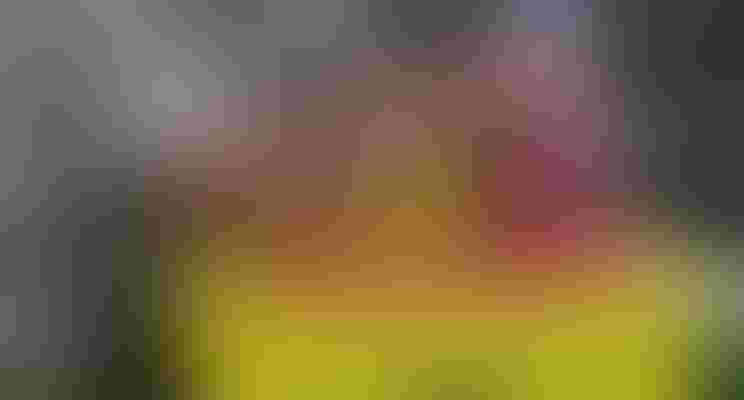 <p>AS PEANUT PRODUCERS gear up for another planting season, they could see shortages this year in certain fungicides due to an expected increase in acreage.</p>

Peanut producers have no shortage of issues going into the 2015 production season, including tight budgets and a possible shortage of some fungicide materials.

“Low contract prices for peanuts are an issue this year, and fungicides can comprise 10 to 20 percent of the total variable costs involved in growing a crop, with the other major cost being seed. Everything else pales in comparison to those two,” said Austin Hagan, Auburn University Extension plant pathologist, speaking at the recent Alabama Peanut Production Meeting held in Shorter.

Another issue might be a shortage of fungicide products to help protect this year’s crop, he adds.

“We basically will have 1 million acres of peanuts in Alabama, Georgia and Florida, and that may cause the shortage of some products,” says Hagan.

Focusing on budget considerations, he says growers need to very carefully decide how much money they’re going to invest in fungicide spray programs and to make any changes without jeopardizing yields.

“There are some ways to maneuver around a few of these problems we may have. For instance, if you have a leaf spot issue but you don’t have white mold, plant early, in late April or the first week of May. If you plant later, particularly around the first part of June, that’s when you’re likely to have more issues with leaf spot.

“If you have white mold issues, plant a little later because the peanuts that usually are hit hard with white mold are planted the third or fourth week of April and maybe into the first week of May. The amount of disease tails off in the later-planted peanuts simply because the crop is maturing during a time of the year when nighttime temperatures have dropped into the 60s and daytime temperatures are in the 80s. These weather patterns are not particularly favorable for white mold development,” says Hagan.

Growers who have white mold and who need to plant early can plant Georgia-12Y, which is highly resistant to the disease, he says.

“Georgia-09B and TUFRunner-511 might be problematic in some fields, particularly with leaf spot, so you might want to adjust your planting dates depending on the variety you’re planting.”

There might be some savings in reducing seeding rates in some cases, says Hagan. “We’re looking at seeding rate studies to see how low we can go. In 2013, we had a yield decline at three seed per foot, but no significant differences at four, six and eight. This past year, there was no response to that seeding rate over the range. Also, if you reduce your seeding rate, you’ll likely have less white mold. The fungus can’t grow down the row from plant to plant very readily.”

As for row spacings, he says, twin rows are better than single rows for reducing white mold.

In the past two years, says Hagan, thrips populations in Alabama peanuts have been pushed back into May.

“Normally, we had almost no thrips pressure in the third or fourth week in May. But that hasn’t been the case in the past two years. If we have a warm spring, they’ll come out the second or third week in April, and by the first week in May, we’ll probably be free and clear of most of the thrips pressure. You may look at using a product such as Orthene or Karate as an at-cracking treatment to save some money. If you’re concerned about thrips, you may go in with one of the other treatments. Growers who plant in April may find it necessary to go back in with an at-cracking treatment.”

Some varieties are more sensitive to thrips feeding damage than others, he notes.

“In Gulf Coast trials, Cruiser Maxx didn’t work very well in April, but we had better control with in May. When we put Orthene in with Cruiser Max, it did a good job regardless of planting date. Orthene mixed with Thimet did a better job in April, but Temik even took a beating in April. These products are not perfect. Thrips probably reduced yields slightly, but controlling them and getting a better looking peanut doesn’t necessarily increase yields. In dryland fields, however, thrips my slow down the plants’ growth habit and make them more vulnerable to herbicide injury. In an irrigated situation, they’ll grow out of the damage.”

Growers have a lot of generic materials available to them, says Hagan, but the problem is that some supplies will be limited this year, creating issues in maintaining a relatively low-cost fungicide program in peanuts.

“Normally, we don’t have such a large acreage. For some materials, there was nothing in the hopper at the end of last year, and we’ll have some issues because some of those same products will be short this year. There may not be enough Dynasty PD to treat all of this peanut seed, and that might be an issue. We’ll have to make it up somewhere else, like with Cruiser Maxx.”

There will be a shortage of Bravo this year, says Hagan.

“We don’t know how bad it will be, but if you try to buy a couple of pallets from a dealer right now, they won’t sell it to you. I heard a story of a vegetable grower in Georgia who tried to buy seven pallets and they sold him one. I don’t know if the generic suppliers who source their chlorothalonil out of Italy will be able to fill the gap left by the low Bravo supplies.

“This may become a real issue this year because we base our leafspot control programs on a chlorothalonil fungicide. There are some options out there. If you have Bravo, you can cut the rate and tank-mix it. The best leafspot material we’ve seen is Alto. Generic tebuconazole is okay, but we had some issues in our trials last year against leaf spot and white mold. The problem you get into when you get away from generic chlorothalonil is that the cost goes up.”

If shortages do occur, he says, growers may be forced to go with brand-name products and spend more money.

“We do have PeanutRx, and a lot of the companies that sell brand-name products have developed Rx programs for their materials. Having the program sponsored by the companies protects the grower if there’s a control failure. They’ll stand behind their products and honor their warranties.

You can reduce the number of fungicide sprays you make by stretching intervals, but it you do it off-label, then you’re responsible for any problems and not the companies.”

New for this year, says Hagan, will be the nematicide Velum Total, which has been registered for use on peanuts and cotton.

“It is an in-furrow spray, but don’t side-dress it. The active ingredient in this material is a fungicide, so it probably will have activity against seedling diseases. It also also contains the insecticide imidacloprid, so it should give a fair amount of protection against thrips.