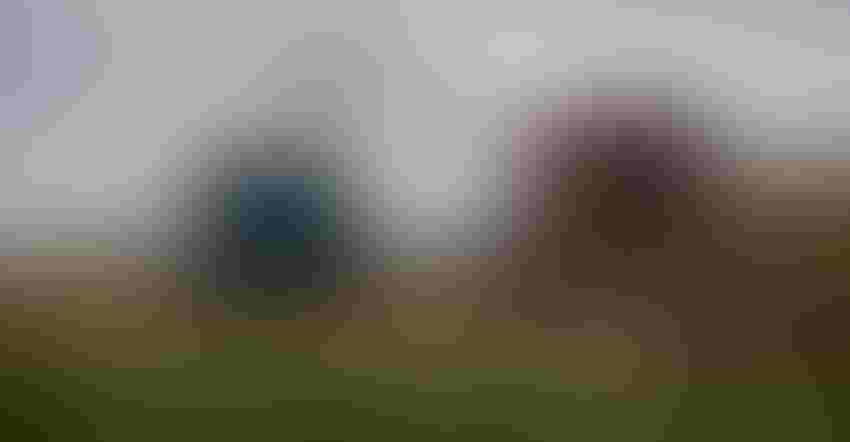 WINDING DOWN: With rainy weather on the horizon, the very last acres of shelled corn were harvested on this farm outside of Richland, Pa. Corn and soybeans are on target for very good yields this year, according to the most recent USDA Crop Progress Report. Chris Torres

About half of Pennsylvania’s corn grain crop has been harvested while Maryland and Delaware farmers are just about finished.

Corn is 53% harvested in the Keystone State, on target with the five-year average of 52%, according to the most recent Crop Progress Report from the National Agricultural Statistics Service.

A solid growing season with timely rains and warm temperatures have led to great yields with some farmers and Extension educators calling it record-breaking.

“Corn and soybean harvest is going strong with the yields being above average. Emerged winter crops have emerged and are looking good,” says crops reporter William C. Shaeffer of Juniata County, Pa.

Soybeans are 67% harvested, ahead of the five-year average of 60%.

Apples are 93% harvested, ahead of the five-year average of 90%. Bruce Hollabaugh, production manager of Hollabaugh Bros. Inc. in Biglerville, Pa., says this year has been a “180” in comparison to last year’s rains, which left a lot of damaged apples.

“The weather, overall, has been kind, both as a growing season and for harvest. Fruit size has been great and flavor has been stellar, of all crops,” he says. “We’ve noticed an uptick in the ‘common’ diseases, most notably scab, we believe due to the intense pressure from last year’s growing season.

“Believe it or not, having enough containers to put our crop in has probably been one of our largest challenges this year. Although we’ve had nearly the perfect amount of harvest help, this year we struggle to find reliable equipment operators,” he says. “Prices have been good for good fruit. But because the national crop is large, it’s been important to maintain the highest quality possible to compete at process that we’d like to see. Overall, although not perfect, this is the kind of season we needed after last year.”

This fall was a dry one in Maryland and Delaware, which greatly affected soybean quality.

Apples are 92% harvested, which is right about average. Winter wheat is 73% planted, ahead of the 58% average.

Lots to harvest in New York

By the numbers, it looks like New York farmers are starting to catch up from what’s been a late growing season.

Still, the damage has already likely been done with a lot of corn still left in the ground, whether it’s for grain or silage.

“Yields vary depending on ground, but in general are down compared to previous years. More ground has been planted to wheat due to spring prevented planting,” says Ellen deMey, a crops reporter in Oswego County, N.Y.

Janice Degni, a crops reporter covering four counties in central New York, says late-planted corn maturity is at a standstill as cold and rainy conditions have taken over.

Only 65% of the corn crop has reached maturity, behind the five-year average of 84%.

Apples are 80% harvested, behind the average 88%. New York is the nation’s second-largest apple producer.

Soybeans are 37% harvested, behind the average 56%. Winter wheat is 86% planted, right about average.

New England growers are just about done with apples, with 88% of the crop harvested.

Corn silage is 93% complete, which is right around average.

Potatoes in Maine are 96% harvested, which is well-ahead of last year’s pace of 80%.

Cranberries, the big crop in Massachusetts, are 49% harvested, behind the five-year pace of 67%.

Peter Jeranyama, a crops reporter on Cape Cod, says that 707,000 barrels of cranberries were reported delivered by one of the region’s largest cranberry handlers. Average yield is 170 barrels an acre, 18 barrels an acre less than last year. Average berry color, which is key to how growers are paid, is 20% higher than the five-year average.