Slideshow: The temperature is finally turning around in Iowa; corn and bean growth is going strong. 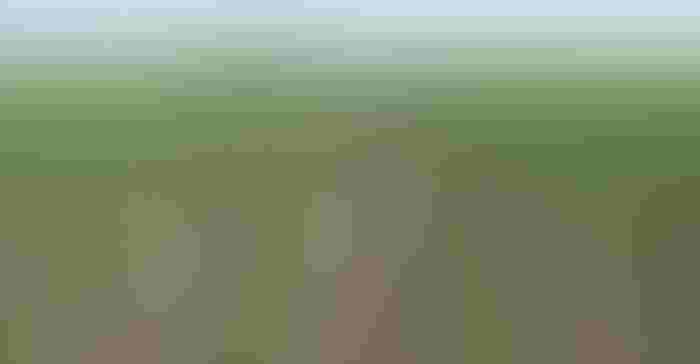 Iowa crops have really started to take off this past week with the warmer temperatures. While rainfall limited field activity in parts of the state, where fieldwork could be done many farmers got started on sidedressing, applying post-herbicides and putting up hay.

Yellow and uneven corn plants, along with weed pressure and insect pests including thistle caterpillars, cutworms, alfalfa weevils and aphids in alfalfa are some of the issues ISU Extension field agronomists saw and heard about. Here are their reports on what’s happening in specific regions across the state.

Joel DeJong, Region 1. “In the northwest corner of the state, this past week was rather dry. The temperature is finally turning around, and growth is really beginning for corn and beans. Almost all the soybeans are emerged, with very few acres left to plant. This looks to be the “ugly duckling” week for corn — where any small difference in the plants will cause uneven looking and uneven colored corn. However, there seems to be adequate soil moisture in the root zone, and the warmer temperatures should get us through this stage quite rapidly.

“Postemergence herbicide applications on corn began last week and will continue this week when the wind isn’t too high. The post-applications are needed because you can see the weed pressure really taking off. Alfalfa cutting started late last week, with few reports of alfalfa weevils here in the northwest Iowa area I cover. However, the aphid numbers seem quite high.”

Paul Kassel, Region 2. “The corn crop is developing rapidly. Areas with poor soil drainage are obvious since many of them have taken on a purple-brown color. Corn development has gone from the V3 stage to the V5 stage in about five days in many fields. There were a lot of postemergence herbicide applications made to the corn crop late last week and continuing this week. There are a lot of waterhemp and other weeds coming to life and timely postemergence herbicide applications are needed. Some fields are showing a pink-purple color where the waterhemp seedlings are breaking through the corn preemergence herbicide program.”

Angie Rieck-Hinz, Region 3. “For the week of May 24 through June 1, we saw varying rainfall amounts across north-central Iowa, from 1.37 inches at Humboldt to 3.5 inches at Mason City. From May 22 through May 28, I received 5.5 inches at my house in northern Story County, and it is reflected by the amount of water ponded in fields. Calhoun, Webster, Hamilton and Hardin counties are no longer listed as abnormally dry on the drought monitor, but as of May 28, Wright, Franklin, Cerro Gordo and Worth counties still show up as abnormally dry. I anticipate that to change this week with recent rains. Corn across north-central Iowa is V2 to V4 growth stage; soybeans are V1 to V3.

“Generally, corn is finally moving out of that “ugly” yellow color. There may be some replanting of ponds depending on how quickly they dry up. We will hit postemergence herbicide applications hard as fields are starting to look weedy. I received multiple phone calls about alfalfa weevils last week. Also, I looked at some soybean fields that had been rolled when it was too wet, causing the surface to crust and soybeans to die or break off when trying to emerge.”

Mike Witt, Region 6. “The heat and the moisture arrived last week. West-central Iowa received anywhere from half an inch to 2-plus inches of rain over the last week. However, there are some areas that are lacking moisture and are listed in the U.S drought monitor at the D0 or Abnormally Dry classification.

“With the lack of significant rain in the forecast farmers with fields in these areas for the next week should monitor their situations. Corn across the west-central Iowa area is at the V2 to the V4 growth stages and will be growing fast. We should be gathering heat units at a good rate with the temperatures this week, so corn should start to emerge from the yellowing stages and into the darker green we are accustomed to seeing.

“Soybeans are in the VE to V2 growth stages and will also benefit from warmer temperatures. Weed pressure around the area is becoming more evident as preemergence herbicide performance or herbicide decisions are starting to become visual in fields. Postemergence spray season is here for some farmers and will pick up in intensity over the next few weeks.

“Regarding insect pests, there are reports of thistle caterpillars making appearances across the area. This pest caused significant damage to soybean fields in west-central Iowa last year. However, it doesn’t overwinter in Iowa so it will be important to scout fields to determine if any action is warranted in terms of spraying with an insecticide. Alfalfa fields are nearing the budding stage if not there already, and the first cutting is commencing around the region.”

Terry Basol, Region 4. “Weather the last couple of weeks has helped restore our topsoil moisture, but the cooler conditions have slowed crop growth. Some of the corn looks pale yellow and some a little purple, but the corn should grow out of this with warmer weather and sunshine this week. Most of the corn in northeast Iowa ranges from V1 to V3 growth stage. While, we are currently a little behind on growing degree days, the forecast for the next few weeks looks promising to get caught up.

“Farmers have started postemergence herbicide applications and sidedressing nitrogen. Now is the time to also be scouting for black cutworm activity in corn. Soybeans range from VE to V1 growth stage, and according to the June 1 USDA Crops Progress Report, soybeans in north-central Iowa are 96% emerged and 84% emerged in northeast Iowa. Overall, soybeans look good. We are looking forward to a week of sun and warmth, giving growers a chance to work on timely field operations for the corn, soybean and hay crops in this area.”

Meaghan Anderson, Region 7. “Crops are starting to take off with the warmer weather and sun, but we are starting to notice more unevenness and issues across fields. Around the V3 stage for corn, nodal roots take over, and corn that is struggling will continue to look yellow or show other symptoms of belowground problems, while corn with better root systems takes on the pretty, dark green color we like to see.

“I’ve seen herbicide carryover, uneven planting depth, grub activity, and anhydrous ammonia burn in cornfields the past week. Postemergence herbicide applications in corn started over the weekend but have hopefully stalled during the windy afternoons this week.

“We’ve had many reports of significant grass and velvetleaf infestations that broke through preemergence herbicide applications in cornfields. The earliest waterhemp escapes are 3 to 4 inches tall already, but most waterhemp are less than 1 inch tall. Soybeans are anywhere from just emerged to V1 (maybe V2 in some fields) and really look relatively fantastic. Most soybean fields are clean, stands are fairly even, and I’ve seen little insect activity so far.

“I spotted my first thistle caterpillar larvae on June 1, but populations seem very low in central Iowa. I’d encourage field monitoring but would discourage against widespread use of insecticides if fields are not at threshold levels for defoliation.

“Postemergence herbicide applications for soybeans will likely be happening later this week, and farmers using dicamba will want to be especially careful with applications given the application restrictions for these products.”

Rebecca Vittetoe, Region 8: “This past week brought warmer temperatures and anywhere from half an inch to 1.5 inches of rain across east-central Iowa. Crops have really started growing in the last week. Most cornfields range from V3 to V5 growth stage, and soybeans are mainly VC to V1. Sidedressing corn, applying postemergence herbicides and taking the first cutting of hay were the primary field activities this past week. Insects and weeds seem to be the big pest issues so far this year. Insects I’ve either seen or have heard about include black cutworms, bean leaf beetles, alfalfa weevils and pea aphids in alfalfa. While weeds are also taking off with the warmer weather, pay close attention to weather conditions when spraying.”

Virgil Schmitt, Region 9: “Generally, rainfall last week in the counties I cover was half an inch to 1.5 inches. Temperatures last week were 1 to 3 degrees warmer than normal. A great deal of hay was cut over this past weekend. Most cornfields are at V3 to V5 and look good. Soybeans are mostly VC to V1. In general, they also look good. Smooth bromegrass and orchardgrass are headed out, and most clovers are blooming. Wild parsnip is also blooming. “June bugs” are numerous. Herbicides, herbicide drift, nitrogen applications, rye cover crop termination by harvesting, and grain bin management dominated calls last week.”

Josh Michel, Region 11: “Most of my region received 1 to 2 inches of rain over the past week, with a few isolated areas receiving up to 3 inches. For many, the first cutting of alfalfa has been harvested. Pastures have continued to look good and be productive, thanks to the rain and slightly cooler temperatures.

“Corn is generally at V2 to V3 growth stage, with some early-planted corn at V4. Although there have been reports of uneven stands, most of the corn is looking good. Soybeans are generally at V1 to V2, with some early-planted soybeans at V3. Besides a few small areas, any replanting of corn and soybeans has been completed. Field calls last week mainly consisted of weed management, herbicide applications, nitrogen sidedressing, replanting, thistle caterpillars, bean leaf beetles and alfalfa weevils.”