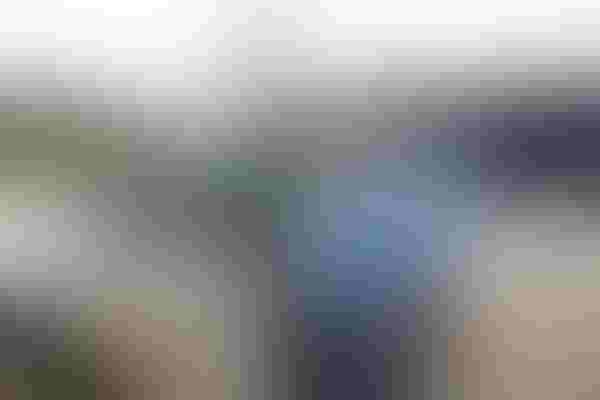 Whenever dryland yields equal those of irrigated land, it’s about as close to perfection as a peanut production season can be — and that’s what Tim McMillan and his family experienced in 2012.

“I’ve been farming since 1983, and last year was the most perfect year for weather I’ve seen, says McMillan, who along with his brother Steve owns and operates Southern Grace Farms in south Georgia’s Berrien County.

“My father bought our first cable-tow traveler in 1978, after the drought of 1977,” he says. “This past year was the first since I’ve been farming I didn’t drag it out from under the shed.

“The rains we got were perfect, and temperatures were low enough peanuts weren’t hurt. It was a dream year, and I’m not sure if I’ll ever see one like it again.”

Altogether, it was a good enough year to earn McMillan and Southern Grace Farms the 2013 Farm Press Peanut Profitability Award for the Lower Southeast Region.

The award is based on production efficiency, and McMillan says there are two keys to achieving this goal.

“One is being timely — whether you’re talking about herbicides, insecticides or irrigation. If it needs to be done today, it needs to be today, not tomorrow. The second is holding down overhead costs, including equipment, general supplies, and inputs.”

Tim and Steve are the seventh generation of McMillans on the farm, located in the community of Enigma.

“When I graduated from the University of Georgia, my father decided to retire,” Tim says. “He sold us his equipment, and he kept the land, which we continued to rent over the years while we bought some farms of our own. He’s semi-retired, but at age 80 continues to grow 30 or 40 acres each year.”

In the beginning, the brothers farmed “separate but together,” explains Tim. “We shared some of the same equipment, but had different farms. We diversified our crops, and I tended tobacco and planted cotton while Steve planted peanuts and some of the cotton. We did that until 1996, when we discovered we both were working hard for each other, but were having to keep things separate.

“We’d have to get together once a month to settle up. That wasn’t always fair, because one of us might get rain when the other one didn’t. We worked equally hard, but we weren’t always coming out the same.”

That led in 1996 to the corporation now known as Southern Grace Farms. However, changes in the tobacco program caused them to diversify and grow a different mix of crops.

“At that time, we were growing tobacco, cotton, corn and rye. In the late 1990s, we started losing our tobacco quota. We were encouraged to grow you-pick strawberries, and I tried that for a couple of years in the yard, but it didn’t work for me.

Had to replace tobacco

“When the tobacco quota was eliminated, we decided we had to try something, so we again tried you-pick strawberries, and this time people starting coming. We also planted blackberries, and now we’re up to 65 acres.

“We still grow traditional row crops — 200 acres of peanuts and 400 acres of cotton. In some years we grow corn, in some years we don’t. In addition to strawberries and blackberries, we also grow you-pick nectarines and peaches. We have two you-pick locations, at Enigma and at Valdosta.”

When the tobacco buyout occurred, it was no longer feasible for them to grow the crop, says McMillan.

“Steve and I are the owners and operators — I manage the row crops and he manages the fruit and the peanut buying point. Steve’s wife, Laura, is our office manager, and his daughter, Jennifer, runs the Internet business that sells jams and jellies made from our fruit crops, along with other products. She also coordinates transportation at the peanut buying point.”

“We are on a three-year rotation. Mostly, it’s two years of cotton and then peanuts. Sometimes, we’ll throw corn into the mix, depending on prices.

“I put together a budget every February or March, and I have three scenarios. The worst-case scenario is that we don’t make anything. The second scenario is that we make our average over the years. The third is for a fantastic year — and last year was even better than the best projections.”

The peanut planting window has changed recently due to varieties that are more resistant to tomato spotted wilt virus and other diseases, says McMillan.

While that plan worked last year, it hasn’t come close this year.

“This year is the latest we’ve ever planted. If last year was a dream year, this year started off as a nightmare. We had the same goals and same structure to carry it out, but the wet, cold weather this spring slowed us down.

“We were basically two weeks behind, and I don’t know how that’ll affect us. No one knows what a season will bring — I try not to worry about things I can’t change.”

Last year, McMillan planted his entire crop in the Georgia-06G variety. “We do a variety trial each year, and Georgia-06 was tops for about five consecutive years. I always carry it out with yield and grade to see which is the top money maker, and Georgia-06G has been at the top.

Varietal information from other farmers

“With a buying point, I get to talk with a lot of farmers about how different varieties are performing.”

The No. 1 factor for controlling disease pressure in peanuts is rotation, he says. “I probably don’t have the best rotation with my three-year program; four or five would be better. But whenever I evaluate it, I still think we’re making more money from having peanuts every third year rather than every fourth year.”

He uses a moldboard plow, which he feels is important for minimizing both disease and weed pressure. For disease control in 2012, he used Headline at 40 days, four sprays of Provost starting at 60 days, and finished with Bravo.

This year, he plans on trying Proline at 30 or 35 days and then starting with the Provost program, adjusting as needed for weather conditions.

“We plant conventionally, harrowing the land a couple of times, and then we moldboard it. If it’s dryland, we incorporate Sonalan with a tillavator. The only difference between dryland and irrigated is that on irrigated land I spray Prowl, Strongarm at a half rate, and Valor at 3 ounces pre-emergence, and I then irrigate it in.

“With dryland, I incorporate Sonalan, come in and apply Valor and Strongarm pre-emergence, and then hope and pray we get a rain. The yellow herbicide and then Valor and half-rate Strongarm usually carry us until I can spray Cadre. That usually takes care of any weed problems.”

In most years, McMillan doesn’t have any insect problems in his peanuts. “I didn’t spray for anything last year. In some years, we have problems with lesser cornstalk borers and have to apply Lorsban, but we scout for them. We usually have a lot of foliage, so we don’t mind a small amount of worm damage.”

His peanuts are 40 percent center pivot irrigated and 20 percent cable tow, and he uses the checkbook method for scheduling irrigation.

“We’re in an area called the Gulfstream Trough, and we can’t get deep irrigation water, so we rely on farm ponds and sand wells. Go down about 120 feet and there will be a layer of phosphate sand, and there’s water there.

“We can’t get but 70 to 120 gallons of flow, so the wells feed the ponds. We have one pond with six wells around it. There is deep water, but it’s so deep it’s not practical to get it.”

Determining maturity is vital in getting the best yield potential from a peanut crop, says McMillan.

“When I was at the University of Georgia, they were just coming out with the hull-scrape method, and I’ve relied on it since then. We bring it to the county agent, and we always try to be there ourselves to look at it.

“Then, if we think the peanuts are ready, we’ll go plow two rows and do my father’s old method where you shell them out and come up with a percentage of matures and immatures.

“If the matures are in the 70-percent range, and the hull-scrape indicates it, then we usually dig. Our family really believes in leaving peanuts in the dirt until they reach full maturity.”

There are legitimate justifications for digging early, he says, such as when a storm is coming. But for full yield, he says, peanuts need to be left in the dirt for a sufficient length of time.

As for recent gyrations in the peanut market, he believes it’s a situation that won’t change anytime soon. “I think the peanut market will always be of a roller-coaster nature, and cotton and corn prices will have a big effect on peanuts.”

McMillan is hopeful a new farm bill will be approved by Congress this year, but he’s concerned about the effect it may have on rural communities.

“I hate to see direct payments eliminated because that will take a lot of money out of rural communities. Farmers spend money from direct payments — they either need it for the cash flow, or they’ll spend it.

“Either way, it’s good for the local economy. But if there’s a safety net, that’s more important than a direct payment, and that’s more justifiable to the general public.”

Whether or not an eighth generation of McMillans takes the helm of Southern Grace Farms is uncertain, he says.

“Steve and I both have sons who are debating coming back to the farm. Our father never encouraged us to come back to the farm; he felt it was something to which you needed to be fully committed.

“My 16-year-old is struggling with it, because he has a sentimental attachment to the farm and he’s afraid there won’t be an eighth generation. But I’ve tried to explain to him that sometimes things just have to end, and that he doesn’t need to come back to the farm for that reason alone.”

McMillan and his wife, Margaret, have three sons, Jesse, Tyson and Daniel. He is a board member of the Berrien County Farm Bureau and is on the state fruit committee of the Georgia Farm Bureau.

He’s also a member of the Berrien County Board of Education and the Nashville United Methodist Church.