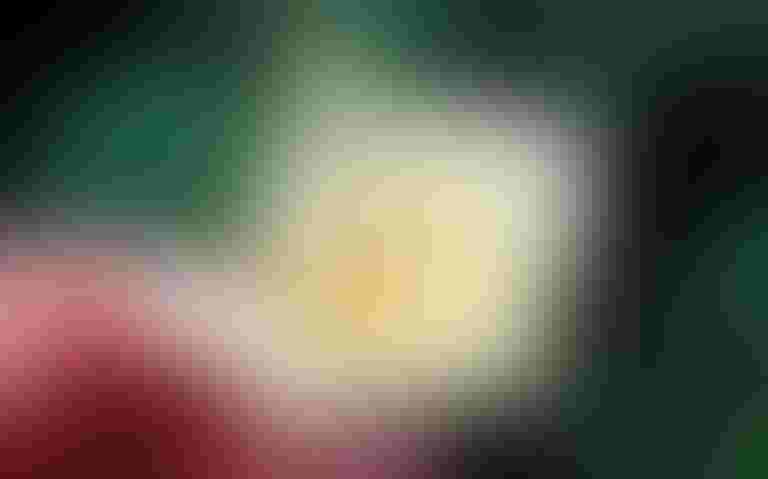 <p>DIRTY blooms are an indication that plant bugs (especially nymphs) are feeding on larger squares which the plant did not shed.</p>

In fact, if there was any hope of a cotton acreage resurgence in north Alabama’s Tennessee Valley, it may have been thwarted by plant bug control issues in 2014, says Reed.

“Unlike in the past, it looked as though plant bugs were attacking bolls and puncturing bolls a lot more times,” says Reed. “In the past, we’d see one or two punctures on a small boll. In 2014, we saw multiple punctures, and the small bolls would be aborted from tarnished plant bug damage. It’s just another thing that’ll hurt cotton acreage in north Alabama’s Tennessee Valley. It was an expensive issue for growers to contend with.”

Reed’s colleague – Ron Smith – says the control problems were always with the immature stage. “And the immature stage doesn’t fly, so they weren’t coming in from the borders – they were turning over right there in the field in July. They’re deep in the canopy in July, and they’re feeding on the large squares just before they unfold as a bloom. That’s their primary fruit source – they’re no longer attacking the pinhead squares in the terminals, like they are in June. They’re deep in the canopy, and they’re not moving around. They’re sitting inside the bracs of those large squares,” he says.

When the bloom opens, says Smith, growers will we’ll see a “dirty” bloom.

“These insects just aren’t being exposed to the insecticide. We had a good rainfall window during early season in the Tennessee Valley, so cotton got big. The immatures in July are the result of adults that were allowed to deposit eggs about three weeks earlier back in June. In June of last year, we were saying that their damage consisted of pinhead square feeding. So we said if it doesn’t fall below 80-percent square retention – as long as we lose only about 20 percent or less of squares – then we won’t spray,” he says.

But that wasn’t taking into consideration one thing, says Smith. “They’re doing more than just feeding on the pinhead squares in June. They’re depositing eggs. So you can take a mass number of plant bugs out there in June, and if the scout or consultant never finds below 80-percent square retention, we’re just letting them ride. They’re depositing eggs, and that’ll give you a problem three weeks later.”

The time to address this problem is in June, when numbers are present, says Smith.

“So we’ve added a threshold this year for adult plant bugs in June rather than just relying on pinhead square retention. But you need a sweep net to monitor it – you can’t just go out and visibly find them. In our 2015 recommendations, we’ve got an additional optional threshold of eight adults per 100 sweeps with a sweep net. We get about 3 feet from a sweep so that would be 33 feet. If we’ve got that many adults, then we need to spray, not necessarily because they’ll cost us something at the time, but they’ll cost us in control problems a month later, and we won’t be able to handle them if we have rank cotton.”

“You might feel like you’re okay because you’re above 80 percent. The next week, you’re still at 85 percent. But the plants got four or five more pinhead squares per plant in the next week, so it’s putting on more and keeping us from going below 80 percent. I don’t think people are factoring in that number.”

As cotton increases the pinhead square count, he says, the same level of plant bugs will be present, but the cotton might even look better. “They’re still doing the damage, and you have to factor that in.”

Last year, from the very beginning, there was a mix of two different species of plan bug in Alabama cotton, says Smith.

“There’s a clouded plant bug, and it’s a more robust plant bug. The tarnished plant bug has a succession of wild hosts in the spring before it moves into cotton. This may be a one-year thing, and whichever one we have this year may depend on environmental conditions.”

The sweep net is a great tool for scouting cotton, especially at pre-bloom, says Smith.

“I don’t see how you scout cotton for plant bugs without a sweep net. I’d recommend that you buy the one made of the heaviest-duty materials, because they’re easy to wear out. A drop cloth is fine for measuring immatures into July, after cotton starts blooming. But you can still use that sweep net too. Drop cloths are hard, dirty work. A sweep net is more reasonable as a scouting tool, and you can use it all day.”

Effective insecticides are available for use on plant bugs, says Smith, including Orthene, Bidrin and new products like Transform.

“The further we get away from the loss of Temik, the greater the mite problem will be. The only other factor is weather conditions during a particular season.”

The problem is increasing, he says, especially in hot, dry years.

“Mites were in every field in the state in 2013. They really didn’t cause a lot of problems because it was a relatively wet and cool summer. In 2014, it was hot and dry. When scouting, look under the leaves and look for visible symptoms on the top leaves.”

And, he adds, mites aren’t necessarily on the borders like they used to be. “You have to look for speckling on the tops of the leaves and flip the leaves over and see what’s underneath. The heaviest damaged leaves last year had few mites, meaning it was an old population. So you need to move up the plant one or two nodes because they’ll eventually move up to more tender and fresher leaves. That’s where the higher numbers were located. So keep looking above where you see the most visible damage.”

If you’ve got mites, and a hot, dry week is coming up, you should be proactive on mites, advises Smith.

“If weather conditions will be cloudy and cool with a good chance of rainfall, you can buy some time. Anytime you can delay a spray for a day or a week in the summer, it decreases the likelihood that you’ll have to come back and spray for that pest again. So if you can buy a few days, you’ll be better off.”

Distribution over the field is another factor, he adds. “Are they everywhere, or are they just in pockets? How long have they been present? The time of the season also is important.

In future years, you’ll have to be a lot more proactive on spider mites in hot, dry years, and you can’t let them go too far.”

Insecticide choices for spider mites range from being very inconsistent to not being effective at all.

“You’ll have to go with one of the new chemistries, such as abamectin, which is the most economical one. You can use 8 to 12 ounces per acre.”