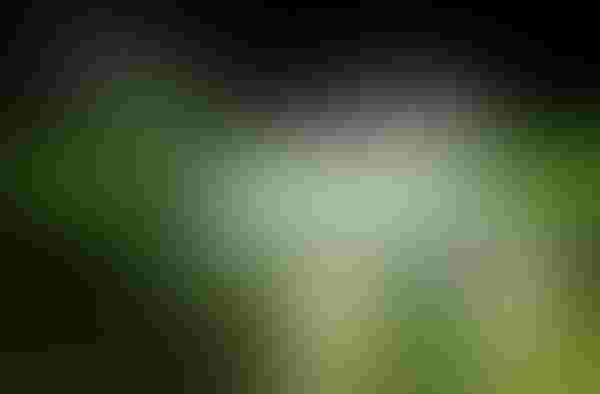 <p> Virtual tractor on John Deere is launching the 8R tractor series as part of its launch for 2014, but at its dealer and media reveal there was only a virtual look at the machine. This image is actually detail of the machine projected on a shape in the room. High-tech thinking is driving a range of developments at John Deere.</p>

It's easy for 2014 to focus on engine technology in new higher-horsepower tractors and John Deere did that this week in Columbus, Ohio. Media got the chance to join one of four flights of 1,200 dealers each that traveled to the Buckeye State to learn more about what the company plans to offer for 2014. And they got an eyeful, some of which was virtual.

For 2014 the company is launching the new 7R and 8R series of tractors. However, there was only a virtual version of the 8R available for dealers and media to see. But we had plenty of time to look over the 7R series.

The core of the two new tractor series is the new final tier 4 engines - the PSS engines where the second S stands for SCR for selective catalytic reduction, which has been added to the Deere engine line to meet those tougher emission standards. The company had to reduce NOx emissions by another 80% to meet rules set down at the U.S. Environmental Protection Agency in 1996 and phased in through 2014 for over-175-hp engines.

And while lower-emission engines are part of the new 7R and 8R launch, perhaps the bigger news is a new E23 transmission that offers near continuously variable transmission performance in a powershift package. The E23 is available out of the chute in 7R tractors for 2014 and will be added to the 8R machines later in 2014. In fact, the biggest 8R machines will get the E23 transmission as a choice for 2015 (an advance look at where the company is headed for power train options).

Undergirding all this talk of power and emissions is continued advancement of the company's technology platform. FarmSight - as a concept - was rolled out in 2011 and has been moving forward ever since. JDLink is integral to most larger machines for 2014 and this communication tech becomes the infrastructure for new features too.

This slide show offers you an in-depth look at where John Deere is going for 2014 and even beyond.