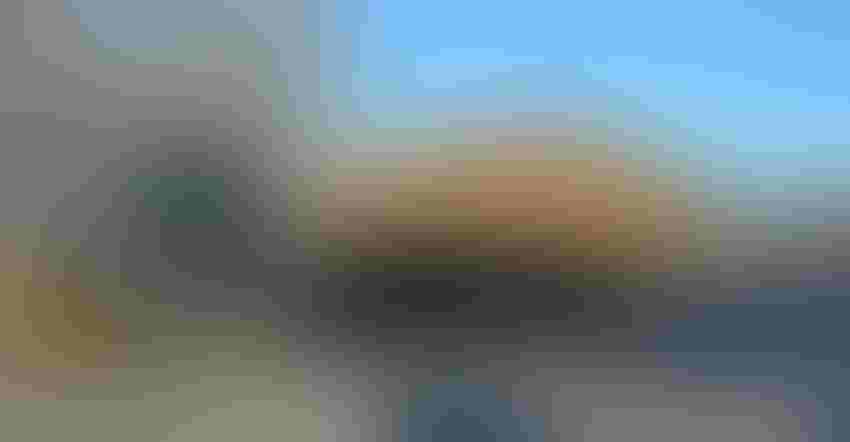 ON THE WAY: A caravan of 10 trucks loaded with hay and 2 pickups pulling trailers loaded with fencing supplies rolls out of Hutchinson headed for Pierce, Neb. on March 31.

In today’s world, those neighbors may be several states away. But that doesn’t stop the outreach. Just as Nebraska and Iowa farmers dug deep to send load after load of hay to Kansas in 2016 and 2017 when unprecedented wildfires burned hundreds of thousands of acres of rangeland in southwest Kansas and northwest Oklahoma, Kansas farmers are now sending load after load of hay north as Iowa and Nebraska attempt to dig out after historic flooding that may be a long way from over.

It is hard to describe the emotion that arises from seeing the damage, the loss and the response.

It is notable that almost no national media attention has been paid to the enormous and disastrous losses in the middle of the country. How is it that the humanitarian crisis in the middle of the country is almost unnoticed? It reminds me of reports that the major, rolling dust storms of the 1930s escaped national notice until the blowing dust turned on the streetlights at noon in Washington, D.C.

Almost 70% of Nebraska has flooded. Iowa is following close behind. Fertile farm ground has been saturated with a layer of sand. Debris — from tree limbs to anything that washed away — are emerging in farm fields. There’s devastation in smaller areas of Kansas, Missouri, and Wisconsin.

Snowmelt is only starting in North Dakota, South Dakota (where the Pine Ridge Reservation is in disaster status) and Minnesota. News that the Mississippi is above flood stage at St. Paul, Minn. is not encouraging. The origin of the Mississippi is not that far north of St. Paul. A look at the National Weather Service hydrology page shows the Mississippi in flood from its headwaters all the way to the Gulf.

Flooding could continue for months. Three counties in Kansas are in disaster status from flooding on the Missouri River — so far in areas that traditionally flood in May and June when snowmelt waters move downstream. This year, we were in flood long before snowmelt. That’s not good.

The forecasters are telling us that the flooding around St. Charles, Mo. could exceed the disastrous 500-year flood of 1993. Which, by the way, was nowhere close to 500 years ago.

For Kansans in that caravan of trucks moving north to Nebraska loaded with hay, fencing supplies and other building materials, the trip to Nebraska is payment of a debt. In 2016 and 2017, those caravans were moving south of Nebraska and the Dakotas to Kansas to help the fire victims. This is a chance to repay a debt and farmers like Ben Foster and John Coggins have not forgotten what it meant to them to see help rolling in.

“As horrific as the fire was, this flooding event is even worse,” Foster says. “The recovery from the fire was so much easier. The grass came back. The fences could be rebuilt. It was pretty quick to get the basics back in place. In this event, it will take months to clean up the debris and the damage. And the farmland is devastated. This is heartbreaking.”

It is heartbreaking. But it is also heartwarming. In farm country, people have always looked out for each other. They still do. And that’s saying something in today’s world.

Tonight, I’m proud to be a Kansan. Proud to be part of the agriculture community.