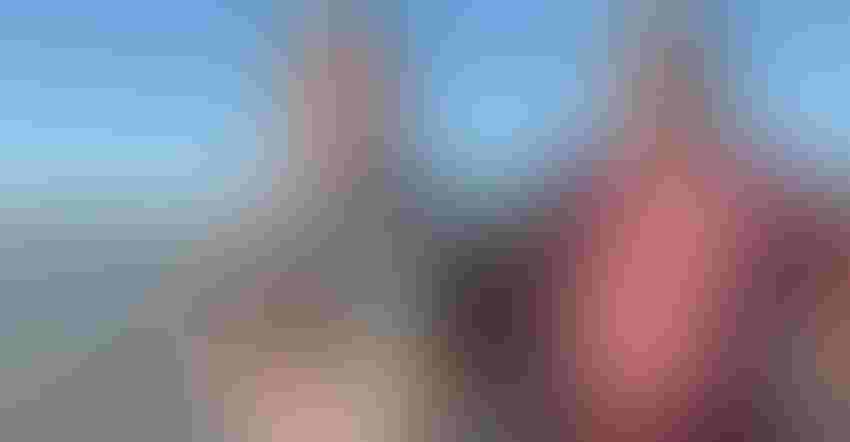 Holly Bluff, Miss., row crop farmers Clay Adcock, left, and his son Parker, stand beside one of their fields covered with floodwater as Clay holds his drone in position for a quick picture before flying it to an altitude high enough to see if water levels in this and other fields have fallen in the last 24-hours.Brad Robb

As Holly Bluff, Miss., farmer Clay Adcock stares across one of his fields covered in water, he, more than many who call the south Delta their home, realizes the flood that continues to place undue hardships on him and his neighboring Mississippians should never have happened.

Across six counties, 512,000 acres of land are covered with floodwater. Over 200,000 of those acres should have young corn or soybean plants emerging through the nutrient-rich south Delta soils, providing a visual start of the 2019 farming season. Unfortunately, many residents, including hundreds of farmers, are more concerned with protecting what they have worked so hard to build over their lifetime — their homes, businesses, and their families.

Ring-levees built with sandbags and covered with polyethylene plastic are the new norm around many houses, churches and farm shops in Issaquena, Yazoo, Sharkey, Warren, Humphreys, and Washington counties in the Magnolia State. “I farm 4,000 acres in and around Holly Bluff and about 2,500 acres of that farmland has been under water since January,” says Adcock. “Seeing the devastation first-hand brings on a wide-range of emotions. People have gone from being shocked to being sad, to being mad, to just wondering why it happened. But I know exactly why it happened.”

The Mississippi River flood of 1927 ranks as one of the worst natural disasters in U.S. history. Month after month of heavy rains raised the Mississippi River to record levels. After the first levee breached in Illinois on April 16, another breached in Mississippi five days later. Eventually, the entire levee system buckled and over 23,000 square miles of land were covered in water — some places as deep as 30 feet.

Our nation’s leaders in Washington recognized the critical need for a national flood control program, which began to be implemented in 1928 after the Mississippi River and Tributaries project was authorized by the 1928 Flood Control Act.

By the 1960s, the Corps of Engineers started constructing the drainage structures and backwater levees. “I was born in the early 1960s, and I can remember seeing those levees as they were being built,” says Adcock. “The project lingered. The Vietnam War held the nation’s attention and finishing the project, I guess, wasn’t a priority.”

The Steele Bayou Structure and the Yazoo Backwater Levee were finally completed in 1978, and the only thing left to do was install the pumps. “The first item of construction for the pumps was awarded in March 1986, but the dirt wasn’t moved until May 5 of that year,” says Adcock.

The 1986 Water Resources Development Act (WRDA) was going to put “cost sharing” on all federal projects. The Senate’s version of WRDA passed in March 1986 — with a date of enactment being the date of the conference. The House passed its version on May 15, with the same date of enactment.

The WRDA conference report was passed in October of the same year, but the date of enactment was grandfathered back to April 30 1986. “It was political wrangling. They knew when they set the date that it only impacted one project in the U.S., and that was the Yazoo Backwater Pump Project,” says Adcock. “The Mississippi Levee Board could not afford the cost-share for a $100 million project.”

Ten years later, Congress redefined the start of construction to the date of award in the 1996 WRDA, which restored the federal funding at 100 percent for the Yazoo Backwater Project. In 2008, the EPA vetoed installation of the pumps.

The wrath of Mother Nature’s flooding power was seen again in May 2011. To avert the Mississippi River from flooding Cario, Ill., the Corps of Engineers blasted a 2-mile hole into the levee protecting the New Madrid Floodway. “Because the Mississippi River was higher than the protected side of the levee, the gates at Steele Bayou had to remain closed,” says Adcock. “Everyone assumed we would get rain while those gates were closed, so we were all concerned about just how bad we would be flooded this time.”

Adcock and the rest of the farmers were only kicking up dust during that time period in 2011 when the gates had to remain closed. Since no rains came, another backwater disaster was averted. “We knew that we just couldn’t keep going to the well, so-to-speak,” says Adcock.

The Rest of the Story

Unlike 2011, when the Mississippi Delta had below normal rainfall, this year has been one of the wettest on record. Although the water level of the Mississippi River was not as high this year as in years past, it was high enough for the Corps to close the gates of the Steele Bayou Control Structure from Feb. 15 to April 1. “There were already 200,000 acres of land under water when they closed the gates earlier this year, so the water has basically formed a huge lake.”

On April 1, the gates were reopened, but there are 512,000 acres under water. “If the pumps had been in place and turned on when the water level was at 87 feet on our side of Steele Bayou, the highest water level to which we would have been exposed would have been 92.3 feet,” says Adcock. “We got to 97.2 feet.”

After federal funding was restored and myriad studies were conducted as a result of lawsuits from wildlife-centric NGOs over concerns for the supposedly endangered Pondberry bush, it was determined it was not endangered at all. “Then those groups implied the pumps would destroy the natural habitat for the black bears,” says Adcock. “The black bear population has sure not been living in trees on that flooded state and federal land. They have been displaced like all of the other wildlife.”

Adcock started contacting congressmen and senators. He started a petition locally, which has been expanded electronically and garnered over 5,000 online signatures. He invited media and every government official to a meeting in Valley Park and took them on a boat trip to see the flooded land. “Cindy Hyde-Smith gave a great speech in front of the Senate Appropriations Committee and EPA Administrator Andrew Wheeler was in attendance.

Hyde-Smith asked Wheeler to revisit the 2008 veto. “He publicly stated that the agency would reconsider their veto. There is possibility they could have been wrong,” says Adcock. “Now we’ve got bipartisan support, and we’re waiting on the EPA to act.”

Fred Ballard of Leland, Miss., has been on the levee board for 31 years. When he started, his peers told him the pumps were needed but they probably would not live to see them installed. At the recent meeting Adcock organized, he told Ballard he would love for him to flip the switch the first time the pumps go operational. “The 80-year-old Ballard nodded his head and smiled with proud anticipation,” concluded Adcock.