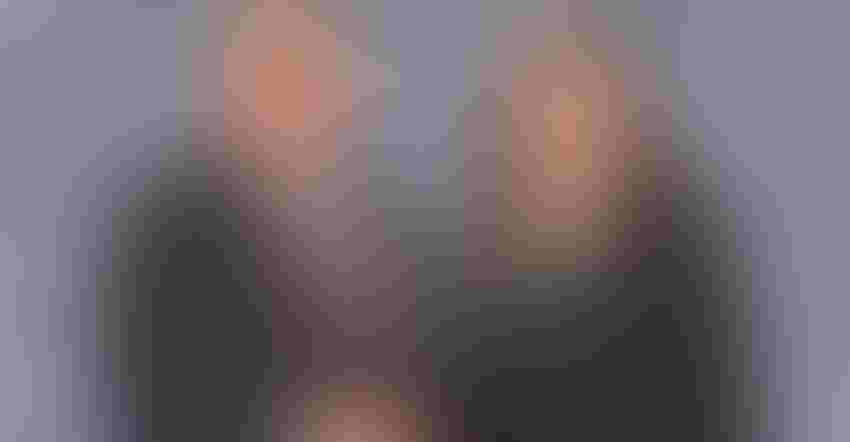 MFB EXPERIENCE: This year, Sydnee Mason (right) will promote Missouri agriculture and Missouri Farm Bureau as the 2017 MFB Ambassador. MFB President Blake Hurst welcomed Mason during the MFB annual meeting in December. She will not only promote agriculture, but also learn about how MFB works at the county, state and national levels.

Sydnee Mason sat on the floor in a walk-in closet at her grandma's house in Chariton, Iowa. Actually, her grandma told her to stay in the closet. "I was struggling to focus on finishing up a speech, and Grandma would not let me out until that happened," Sydnee says, with a chuckle in her voice.

The Missouri Farm Bureau Ambassador program selects one male and one female student, 17 to 22 years of age, to represent agriculture and Farm Bureau for one year. Each ambassador receives a $1,250 educational scholarship.

As ambassadors, Mason and Morgan will make selected appearances throughout 2017, promoting agriculture on behalf of Missouri Farm Bureau. They will assist with Farm Bureau events at the Missouri State Fair and elsewhere. A panel of judges selected the two from a field of 18 contestants selected by county Farm Bureaus.

An outsider
Mason does not come from a deep heritage in agriculture. "I was not a 4-H kid and did not have an interest in FFA," she says.

She grew up near Marshall and attended a small Catholic grade school; there were just eight kids in her eighth-grade graduating class. During that time, basketball was her passion. She competed with traveling basketball teams all the way through middle school. "It was my love," she says, "my focus." But then came high school, and it was time to sign up for classes at Marshall.

Her dad, Ken Mason, is part of the agribusiness industry. As a young man growing up in Tennessee, he was active in FFA. "He was really pushing FFA for me in high school," Mason recalls. "I was resisting. I did not know when I would have time for it or how it would line up in my schedule." But then her dad did something that changed her life goals completely. "He snuck an agriculture education class into my first-semester schedule."

From that semester on, Mason has not looked back. She is not ashamed to say she gave up basketball for the FFA. "I love advocating for agriculture. I am grateful to my dad for sneaking that in and helping me to pursue FFA. He was right," she says.

Future plans
Mason is currently a senior at Marshall High School, where she is very involved in FFA. Mason was the 2016 FFA Teach Ag speech winner; she also presented Models of Excellence awards at the National FFA Convention for three years, and placed third in the state FFA speaking contest in 2014.

Mason plans to attend the University of Missouri and major in agricultural education, with an emphasis in leadership, and a minor in agricultural economics. "My career plan is to use experiences like the MFB Ambassador program and others, along with the knowledge I gain, to teach consumers and help them to have an understanding and appreciation for agriculture, food production and farm families."