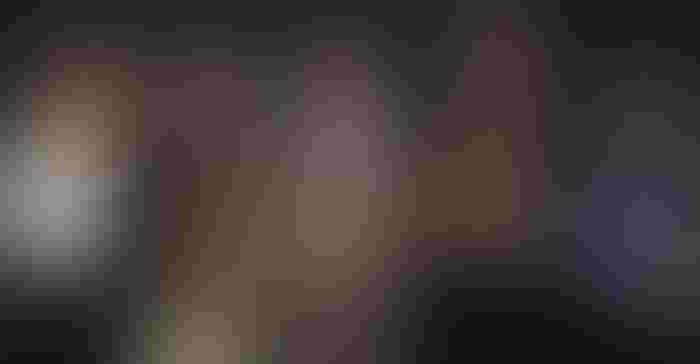 Farmers are not used to being cast into the spotlight. They generally are more comfortable just getting the job done. You could feel that as three deserving, yet humbled, people were honored Jan. 31 with agriculture’s highest honor of being named Master Farmers.

Despite the bitter cold outside, more than 1,200 farmers and others involved in agriculture gathered Jan. 30-31 at the Great Lakes Crop Summit, which was the setting for the luncheon ceremony. The summit and the awards program are supported by the Michigan Soybean Promotion Committee, Michigan Wheat Program and Corn Marketing Program of Michigan.

For the past 15 years, Michigan Farmer has recognized Master Farmers for outstanding farm management, innovation, conservation and leadership.

This year’s winners are M. Dean Haubenstricker of Frankenmuth, C. Bruce Noll of Sheridan and James Domagalski of Columbus.

The award acknowledges a lifetime of achievement and not a single year. Master Farmers are nominated by their peers and are chosen by a committee of agriculture industry leaders.

Master Farmers received a plaque and pin from Michigan Farmer magazine and a Carhartt jacket, donated by Carhartt. They also received a $1,000 check, made possible by sponsors Michigan Agricultural Commodities, Greenstone Farm Credit Services and Wilbur-Ellis.

All three farmers are featured in the February issue of Michigan Farmer.

Videos have been developed by Nicole Heslip and Shannon Yokley of Brownfield Ag News to help tell their stories. View those videos at https://brownfieldagnews.com/news/2019-michigan-master-farmers-honored/.