Ag industry must work together on the dicamba drift dilemma to protect technology for the future. 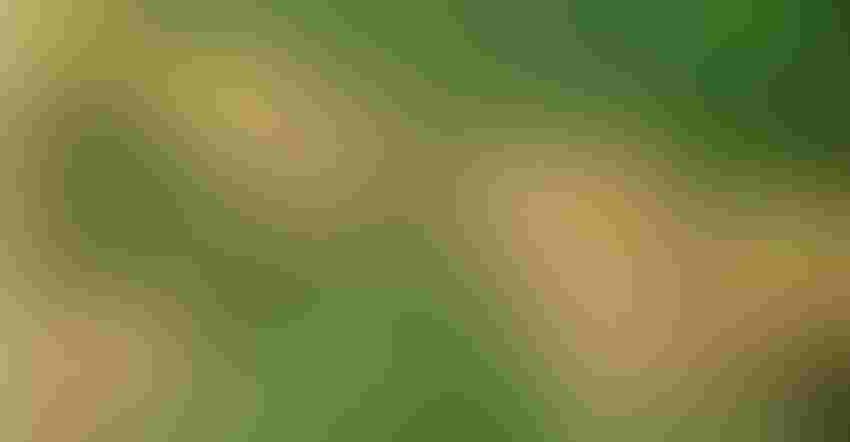 INTENTIONAL SPRAY: There are lessons to learn when spraying weeds. Instead of heeding my husband's warning, I doused those thistles. And killed the grass.

So I may have misunderstood my husband's thistle eradication program. He said to spray "just a little" on the plant, but all I heard was "DIE. DIE. DIE!" With my spray nozzle locked in "open," I waved my wand over every thistle in sight. A couple of days later, he inspected my work. I successfully killed all the thistle — and all the pasture grass around it. My spray privileges have been revoked.

Honestly, thistles have been a problem in our pastures since the drought of 2012. Not enough grass cover provided a great breeding ground for this pesky weed. Every year since, I've walked the pastures and hand-weeded patches of thistle. Still, they'd come back. This year, I had had it. I took to chemical warfare.

I know that Roundup kills weeds and grass. I read the label. In my defense, I am not sure what psi or nozzle position my husband set up on the hand sprayer. Nor did I know the wind speed. But I really didn't care. All I knew was that this year, this weed was not going to take over my pastures. So, I sprayed and sprayed — without care, without caution. The result was a pasture full of dead thistle and grass.

Using chemicals, whether herbicide or pesticide, requires due diligence from applicators. It requires reading, following the labels and often listening to the words of others: in my case, my husband.

Dicamba drift again
Last year was not a stellar year for Missouri in terms of off-label herbicide use. New soybean and cotton varieties that were dicamba-tolerant were planted in fields. At that time, there were no legal dicamba products allowed for use on dicamba-tolerant crops. So, applicators and farmers were going off-label and spraying, ignoring the warnings from university researchers, departments of agriculture and even chemical companies. The result was damage to thousands of acres of soybeans. When dicamba drift complaints reached 212 (mainly in southeast Missouri), the finger-pointing began.

This year is not shaping up to be any better. However, there is a little twist in the details. Three ag companies introduced three new chemical formulations for use with dicamba-tolerant crops to help with hard-to-kill weeds like Palmer amaranth and waterhemp. Still, dicamba damage is occurring. As of July 12, there were 161 dicamba injury cases reported to the Missouri Department of Agriculture all across the state.

However, those chemical companies continue to point at applicator error, agronomists misdiagnosing injury or farmers purchasing old dicamba product — but there is something to be said for company liability.

Who's at fault?
Robb Fraley, Monsanto's chief technology officer, visited Missouri farm fields to see what was going on earlier this month. He saw fields with a uniform pattern of injury representing sprayer contamination. Some fields, he said, were misdiagnosed as dicamba drift injury. However, the maker of XtendiMax With VaporGrip Technology said that there was clearly some off-target dicamba movement based on wind speed and symptomology.

These new formulations did not just arrive in the marketplace in one year. Monsanto tested its new formulation for well over a decade. Their filing with the U.S. EPA shows its use under a variety of conditions, including temperature and wind speed.

Fraley admitted that there are "some growing pains" with new technology, likening it to the introduction of Roundup Ready technology. "Every technology that first year, there are kinds that you need to work out," he said. He added that the fields with injury were already recovering from leaf cupping. And he may be right. The amount of yield loss from dicamba drift may not rival the look of the plants in the field. Those data will be vetted at harvest.

No matter who is to blame, one thing remains. If the agriculture community does not work together to solve the problem of dicamba drift, no one wins.

It will take the efforts of industry, university and farmer to determine the core problem — and ultimately all three to determine a solution. The fate of future ag technology may depend on how we work together in this very moment.

I guess it is time I set up my own meeting with the farm manager — my husband — and listen. If I can learn to use the herbicide judiciously, I might be able to wield the spray wand of thistle death yet again.