Agriculture Sonny Perdue cited the vital role of land-grant universities such as Clemson University in sustaining that momentum during a visit to the campus Nov. 9. 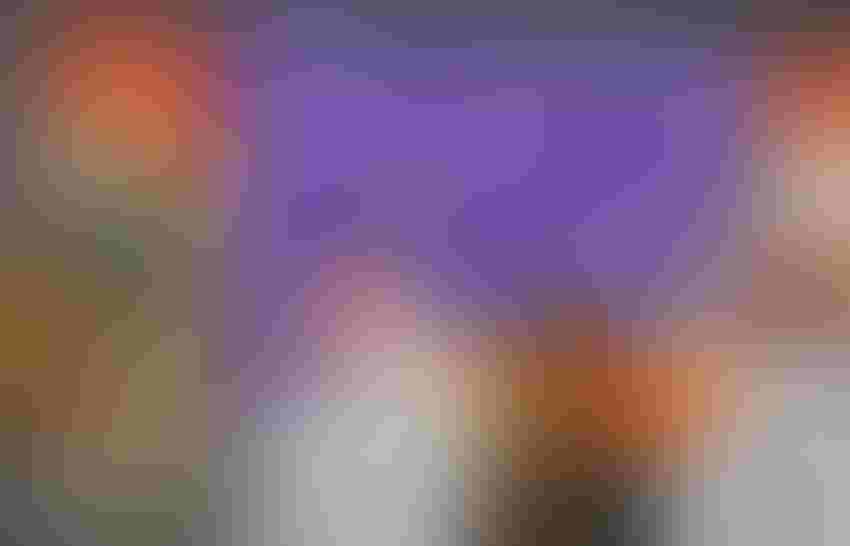 Secretary of Agriculture Sonny Perdue (left) speaks as Keith Belli, dean of Clemson’s College of Agriculture, Forestry and Life Sciences; and Vice President of Clemson Public Service and Agriculture George Askew listen during a banquet at the Hendrix Center.

Declaring America’s agricultural future “bright and prosperous,” United States Secretary of Agriculture Sonny Perdue cited the vital role of land-grant universities such as Clemson University in sustaining that momentum during a visit to the campus Nov. 9

After meeting with Clemson President James P. Clements, Perdue attended a luncheon at the Hendrix Student Center, where he met with students and took questions from farmers, agency heads and other key members of the South Carolina agribusiness industry.

Perdue congratulated the students on choosing to focus their futures on the various aspects of agriculture.

“Agriculture is alive and well and has a bright and prosperous future in so many areas that you all are doing research in,” he said. “I’ve told President (Donald) Trump that I believe if the manufacturing sector in the United States had the same degree of basic research, applied research and a delivery system like the Extension service, we would wouldn’t be talking about the demise of American manufacturing.”

Perdue said the manufacturing aspects of agriculture surpass virtually every other industry in terms of productivity.

“But it doesn’t just happen,” he said. “It is achieved through efforts of places like Clemson University and our other great land grants in conjunction with the Agricultural Research Service through the Department of Agriculture federally, and the U.S. taxpayers obviously are big partners with land grants and certainly in supporting our Extension service and our 4-H programs … and that’s a really important collaboration that we need to enhance and understand more about what we each do and how we can complement one another.”

Perdue said that while the global agriculture industry faces the issue of trying to feed 9 billion people worldwide by the year 2050, the biggest issue currently facing American agriculture is trade.

“How do we sell all the stuff that our farmers and producers grow? That’s one of the things that we focus on at USDA is building markets around the world,” he said. “There’s an international disparity. There’s a proverb that says: ‘When man has not enough to eat, he has one problem; but when he has enough to eat he has many problems.’

“In the United States we are complacent today because we have many problems that don’t have anything to do with the ability to feed our families in the lowest cost, most affordable, most nutritious, healthiest food supply in the developed world. And there are folks around the world that don’t sit at tables like this ever and don’t have what they need.”

Perdue said while he had met many Clemson students during his visit with various agricultural majors, he urged the need for more to set their sights on agricultural communications, citing the importance of “telling the story” of agriculture.

“We can no longer sit behind the farm gate and assume everybody thinks we’re righteous,” he said. “In today’s world of internet and all the social media, there’s a lot of misinformation out there. We lost the language war on GMOs (genetically modified organisms). Now we’ve got new technology out there like non-transgenic gene editing that’s going to help us feed the world. Is that going to be accepted?”

Perdue said the Court of Justice of the European Union has “declared non-transgenic gene editing just as evil as GMOs,” and he expressed concern that U.S. agriculture wouldn’t be able to solve the problem of world hunger with such a constant pushback against science and technology.

“Every time I get with my international colleagues, we’ll sit around these big tables and all of their talking points are about eliminating world hunger by 2030,” he said. “And they get to me — and I’m not very polite with these things — and I say, ‘That sounds all good that you all want to eliminate world hunger while you deny the very tools and techniques that it will take to get there. That’s the facts. Unless you all accept the facts of what our modern crop-protection chemicals have done, as well as our biotechnology efforts have done, you will not eliminate world hunger in that regard.”

Clemson Vice President of Clemson Public Service and Agriculture George Askew gave an update on the work Clemson is doing in the area of water resources management and agricultural water use.

Askew explained that Clemson Cooperative Extension has a presence in each of the state’s 46 counties, while Clemson is also responsible for the state’s Livestock-Poultry Health office, regulatory services unit and USDA-contracted meat and poultry processing inspections.

Clemson also has six Research and Education Centers (RECs) placed strategically around the state to study South Carolina’s unique soil and climate regions, each within their own specific research focus, allowing them to “work as a team” to bring their own area of expertise to the issue of water resource management.

“We have agribusiness in Columbia that can talk about the economics of water issues,” he said. “We have our precision ag people who can work with the sensor-based irrigation people. We have the Advanced Plant Technology people who can work on crops that are more efficient using water — all the way around the state. So we work as a team through the Clemson Experiment Station and then our Extension agents certainly take things out into the state.”

The college had 1,906 undergraduate students as of last year, and Belli said he hoped for that total to reach 2,000 within a few more years.

“We’re really pushing to grow in the future,” Belli said. “On top of all that, of course, we’ve got world-class faculty research going on. We’ve got folks like Stephen Kresovich, who is a world renowned for his genetics and genomics work on sorghum and maize and sugar cane, and folks like Sarah White, who has led an eight-institution effort in terms of the clean water program that … has been going on for a few years into what (Perdue) talked about earlier with Dr. Askew and the president about our water initiatives, which I think are really going to take off and it’s very important to this state and everything we do in agriculture.”