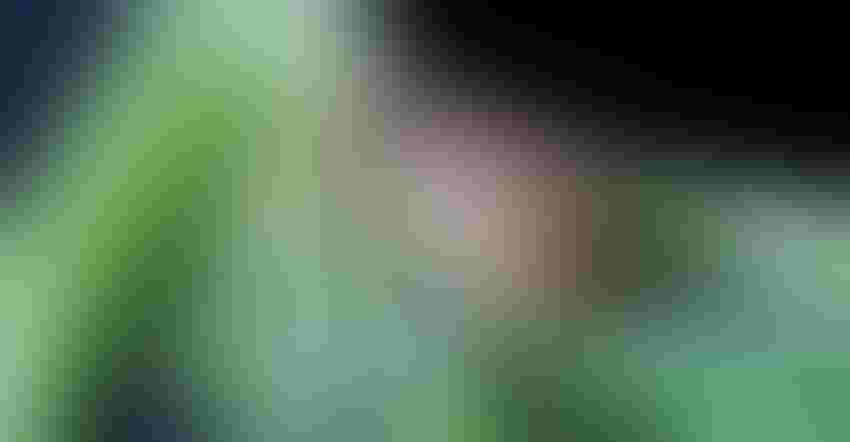 BEATING A FORAGE PEST: University of Wyoming researchers are looking at whether an insecticide remains effective if applied early with a herbicide on alfalfa fields. The convenience of a single application raises timing and effectiveness questions.Clemson University, USDA Cooperative Extension Slide Series, bugwood.org

University of Wyoming researchers are studying whether applying an insecticide early in the season and a herbicide at the same time controls alfalfa weevils, and helps prevent a field from becoming a buffet for pests and heartburn for farmers.

Some companies are offering the option to apply the two pesticides in one application for increased convenience. Herbicides to control weeds are usually applied earlier than the insecticide used for weevil control, and some producers are skeptical that enough larvae have emerged to offer control, says Randa Jabbour, plant sciences associate professor at the University of Wyoming.

“Many producers are saying it’s helping but as of right now there is no data to back that up,” said Micah McClure, a UW plant sciences graduate student.

McClure, of Ronan, Mont., netted insects on research plots this spring at the James C. Hageman Sustainable Agriculture Research and Extension Center near Lingle, Wyo. The first sweep was May 6, and he finished netting his final batch the week of June 22 on the 15 plots. He collected more than 68 bags to take back to the UW College of Agriculture and Natural Resources for counting.

The tiny alfalfa weevil (about 3/16 inches long) beetle is just as excited for the growing season to arrive as farmers; alfalfa weevils overwinter in the crowns of alfalfa plants and debris around a field. Once temperatures rise to about 48 degrees F, females chew holes in the alfalfa stems and deposit eggs as the alfalfa breaks dormancy, around April to May. Each female can lay 400 to 1,000 eggs. The larvae hatch, and the feasting — and damage — begin.

Producers who determine the number of weevils are close to an economic threshold like to spray at least one week before they cut the alfalfa, but that decision can be derailed by factors outside their control — like weather.

“There is this really narrow window of time when these growers are trying to make these decisions,” Jabbour says. Spraying earlier could solve the timing problem.

COVID-19 has slowed UW research efforts, but in a fourth-floor laboratory in the College of Agriculture and Natural Resources, a masked McClure meticulously takes one insect at a time from a plastic bag and puts it under a microscope to determine the species and add it to the running total of insects.

Weevils are a one-generation, early spring problem, McClure says. Some producers cut hay earlier to try to control the pests, but some can survive and start damaging the second cutting, he adds. The pests can then cause further harm to production because an alfalfa plant is putting all its energy into the secondary growth.

Part of a bigger study

The UW effort is part of a larger grant from the USDA National Institute of Food and Agriculture’s Alfalfa Seed and Alfalfa Forage System Program and study led by Utah State University, Jabbour says. Chemists there want to determine how much and how long a pesticide stays on leaves during an application, and how long it stays toxic. Jabbour says entomologists there are measuring different levels of toxicity, and if the insecticide will still kill an insect over time.

UW will collect and send leaf samples to USU next year. Jabbour has a hypothesis that spraying earlier in cooler weather will increase an insecticide’s effectiveness.

“We think when you spray earlier [and it’s cooler], it stays around longer to be able to kill the insect than later in the season [when warmer],” she says.

More efficient spraying could also lessen weevil resistance to an insecticide. Jabbour says in the Western United States, there is more documentation of alfalfa weevils being resistant to some of these pesticides.

“We have not measured that in Wyoming, so we don’t know we have this resistance here; but we probably do, and it’s probably worse in certain places,” she says. “It’s a hunch.”

McClure may be able to give preliminary data on this research this fall. Jabbour says the hope is to give producers good information about whether spraying early is effective; and if so, farmers could optimize when they use the product to reduce the rate of developing resistance in the insects.

Source: University of Wyoming Extension, which is solely responsible for the information provided and is wholly owned by the source. Informa Business Media and all its subsidiaries are not responsible for any of the content contained in this information asset.

I was raised on a crop/livestock farm in the Brady/Gothenburg, Nebraska area, and, at the time, resented all the time spent grinding corn, haying in 100-degree weather, castrating pigs and calves, and moving irrigated pipe. I always tried to make myself scarce when time came to butcher chickens. As I grew up, so did the appreciation of my childhood. Now I look back at that time with fondness, although I'm sure my two brothers might disagree with my reflections. My first job in journalism was at my hometown weekly newspaper, learning more about reporting the first three months than the previous four years of college. Mistakenly believing the grass is always greener, or perhaps it was just plain itchy feet, I launched a career of reporting and editing jobs in several states covering city councils, county commissions, county and district courts, education, law enforcement, high school and college sports, and agriculture. I worked at newspapers in Nebraska, Colorado, Wyoming, Idaho, and Montana, and was managing editor at the last two newspapers. I returned to college at the age of 47 and received a 7-12 social sciences teaching certificate. I never put the certificate to use outside of college but have never regretted returning to school because of the life-altering qualities. I better add I have a very patient and supportive wife. I joined the University of Wyoming Extension in 2005 two days after completing my student teaching assignment. I might be the oldest graduate student in the University of Wyoming Department of Communication and Journalism so far halfway toward a master's degree.