After miserable production in 2016, American burley tobacco producers had good prospects through mid-season of 2017 for producing a crop that could restore inventories and allow growers to realize a profit. 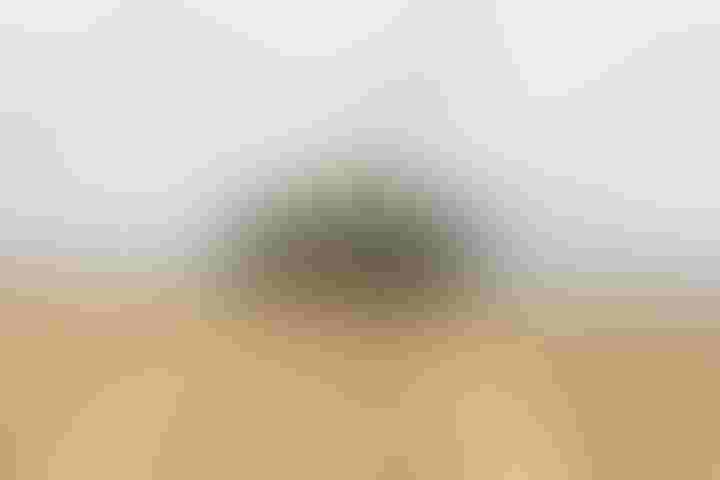 One of the last American burley farms to finish transplanting was the Raines farm in Seaman, Ohio, near Ripley, which wound up on June 13.Chris Bickers

After miserable production in 2016, American burley tobacco producers had good prospects through mid-season of 2017 for producing a crop that could restore inventories and allow growers to realize a profit.

Weather that allowed for a strong early start was an advantage for a number of growers. Some enjoyed an exceptionally early start. Ben Crain of Versailles, Ky., said, "I am 77 years old and have been growing tobacco nearly all my life, but I don't ever recall setting out burley in April."

He did this year. A significant portion of his crop went out on April 28 and April 29, very early for the Bluegrass. There was plenty of rain, and it really grew, Crain said on July 10. “It is about head high to me now. It is in bloom and will need topping this coming week.”

For others, it was a good transplanting season beginning to end. Near Ripley, Ohio, Pat Raines and his sons Todd and Greg finished transplanting their crop on June 16, one day sooner than in 2016.

But they considered it a better season because they had been able to set out their plants on a much more even schedule than in 2016, when extended rains had forced them to plant more of their plants later in the season than desirable. That caused a problem when harvest came around — much of the crop was ready to cut down all at once. That is unlikely to happen this year.

There is definitely some apprehension about harvest labor, thanks to the political situation. Tom McKee of Cynthiana, Ky., said he had successfully gotten his 25-acre crop transplanted, but getting enough labor to harvest it might be a problem.

Getting stalks hung in a curing barn is the issue, he explained. His operation is not really big enough to allow him to recruit guest labor through the H-2A program from Mexico and the Central American countries, as many tobacco farmers choose to do.

Despite the outbreak of two fearsome diseases, the 2017 crop had gotten off to a good start. Of course, anything can happen in the field, but there was high hope at the time of this writing that this crop would enjoy an at-least average yield for the first time in three years. It was believed farmers had planted slightly fewer acres, but an average yield would result in more volume than in 2016.

In short, it appears the outlook for U.S. burley is good now. “The way it looks to me, we ought to have a good crop,” said Crain. “But as always we will need good housing weather followed by proper curing conditions.“

In neighboring Tennessee, Don Fowlkes, manager of agronomy for Burley Stabilization Corporation in Greeneville, said the east Tennessee burley crop was 10 to 14 days behind normal.

"We were farther behind than that, but we mostly got caught up (in mid June) when we got some good weather.” NASS estimated that 98 percent of the state’s crops (all types) had been planted and two percent had been topped. "We are still early in the season, but so far it is looking okay,” said Fowlkes.

In Trousdale County in north central Tennessee, there had been rain in some amount every day of the first full week of July. “Some tobacco is suffering due to all the moisture,” said Jason Evitts, county agent. “Leaf spot diseases are a major concern, and producers are unable to spray for control or make preventative sprays.”

In other tobacco news

Harvest was well under way for flue-cured in mid-July. NASS estimated that 11 percent of the Georgia crop had been harvested by July 10 and 85 percent had been topped.

In South Carolina, two percent had been harvested and 67 percent had been topped. Heavy rains fell in the northern part of Horry County (the leading tobacco county), resulting in some minor flooding, while the rest of the county saw much-needed moderate showers, said Rusty Skipper, Horry County Extension agent.

In Virginia, the tobacco was reportedly coming along “nicely” in mid July in Brunswick and Greensville Counties, both in southeastern Virginia. “Some producers are watching the weather to determine irrigation plans,” said Cynthia Gregg, Brunswick Extension agent. In Greensville County, agent Sara Rutherford said some tobacco had been topped. “Not all fields have set blooms.”

Blue mold is back

The one thing that might derail American leaf production would be diseases and another dangerous one has broken out.

Blue mold exploded in Georgia and Florida after layby, said J. Michael Moore, Georgia Extension tobacco specialist. It had been found by mid-July in 10 Georgia counties. "Tobacco that is lapping in the middle now encourages the development of blue mold.

Also, temperatures have been five to seven degrees below normal, which favors the blue mold organism. While some of the infection comes from about 10 greenhouses that were identified as having the disease early in the season, there has apparently been a spore shower since then.

"Farmers are using chemical control, including the relatively new compounds Presidio and Orondis Ultra, which are labeled for use in the field."

Earlier, a quarter of Georgia/Florida plants showed some level of symptoms of spotted wilt, said Moore. "We are looking at perhaps a 10 to 15 percent yield loss on some farms," he added.

This was the most damage in years, Moore said, but it would have been worse if it had come right after transplanting. "Instead, we mainly saw it between layby and topping. I frankly was afraid the damage would be worse based on the mild winter we had."

Spotted wilt was a problem in in North Carolina too, but thrips had moved on to other crops by mid-July, and the wilt seemed to have leveled off by that time, said Matthew Vann, North Carolina Extension tobacco specialist. “I think we have seen about all we are going to see of tomato spotted wilt virus.”

After three years as chief executive of the of U.S. Tobacco Cooperative (USTC), Stuart Thompson resigned in May and was replaced on an interim basis by staff member Edward Kacsuta, according to the cooperative.

Thompson’s "departure comes at a time when there were differing opinions on business strategy," said USTC which is based in Raleigh, N.C.

At about the same time, Andrew Q. Shepherd of Blackstone, Va., was elected the new chairman of the board of U.S. T.C., succeeding James Hill of Kinston, N.C., according to the cooperative's website. Hill continues as a member of the board.