Research has shown that seasonal timing (fall vs. spring) has little effect on P availability due to its limited mobility in soils. 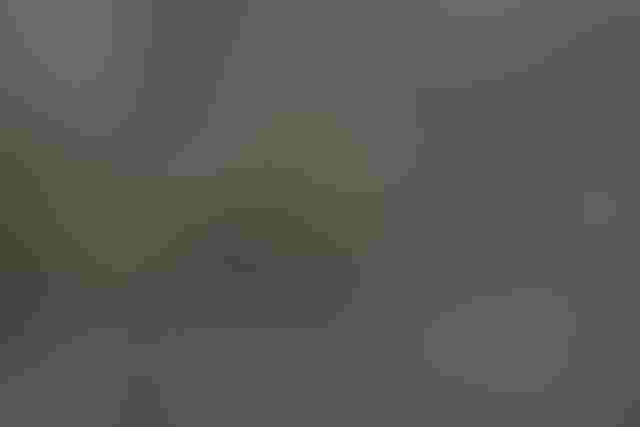 Among the major nutrients (nitrogen, phosphorus and potassium), phosphorus (P) has the least mobility. As the fertilizer granule dissolves, most of the P in the fertilizer will likely only move a couple eights of an inch away from the granule, primarily by diffusion. The dissolved P will then start to react with cations in solution such as calcium, aluminum, and iron, and will start to adsorb onto soil particles. In general, tie up of P as calcium phosphates is a concern when the soil pH exceeds 7.3. Soils will become more acidic over time if they are not limed. With the decrease in pH, the availability of P will change. When the pH of soils range between 4.8 and 5.5, P is more reactive with aluminum in the soil and is tied up as aluminum phosphates that are not available to the plants. Liming of the soil can help to increase P availability from Fe and Al bound forms. The reaction of sorption and precipitation will limit P availability to plants.

Phosphorus will be most available to the plant within a few day s to two weeks after fertilizer addition, slowly dropping as time goes on. When applied in the fall, P will stay in the soil for as long as four to six months before plant uptake. This is a long time for P to sit in the soil unused by the plants, which can minimize the fertilizer’s effectiveness to supply plants with adequate levels of P. However, in Minnesota the colder temperatures in the fall and winter keep P reactions from happening, which minimizes P sorption and precipitation in soils. The P that is tied up in the soil is not measured by routine soil test procedures. Some P that is tied up can return back to plant available forms depending on the solubility of the phosphate compound formed in the soil. Calcium-bound forms of P vary in their solubility. Dicalcium phosphate dihydrate is the most soluble followed in order of decreasing solubility by dicalcium phosphate, octocalcium phosphate, tricalcium phosphate and primary phosphate containing minerals like apatite. Acidification of soils to release Ca bound P forms is not feasible in Minnesota.

What the research says

Research has shown that seasonal timing (fall vs. spring) has little effect on P availability due to its limited mobility in soils. Changing management of P fertilizers, such as banding, is the most effective way to deal with tie up of P in Ca-bound forms.

Soils throughout most of western Minnesota usually have low levels of available P because of the materials that formed the soils. Therefore, appropriate management of phosphate fertilizers is a major concern for these soils. On the other hand, soils in southeastern, central and east-central Minnesota usually have a high level of available phosphorus. For these regions, phosphate is usually not needed in large quantities in any fertilizer program.

The ability of banded fertilizer to supply all of a crop’s P requirement can depend on the type of band used and the soil test. Banding liquid fertilizer on the seed is common for corn and sugarbeet. Use low rates when banding on the seed to avoid reduced emergence due to high salts or ammonia formation near the seed. A low rate of phosphate banded with the seed can provide maximum yield for corn at a medium soil test, but is not enough to maximize yield when soil P test low. Recent data has also shown that a low rate of fertilizer banded with the seed is better than higher rates of broadcast P for sugarbeet.

The most important decision-making factors for P management are the amount of P applied and the price of fertilizer. Use a soil test to guide the amount of P you apply. In general, plants will respond to P addition when the Bray soil test is between 0 and 15 ppm or the Olsen soil test is between 0 to 11 ppm. The timing of your P application, whether fall or spring, should be determined by fertilizer prices and the field conditions. Remember that MAP or DAP fertilizers also have significant amounts of N, so consider the potential for N loss with fall applications of these fertilizers.