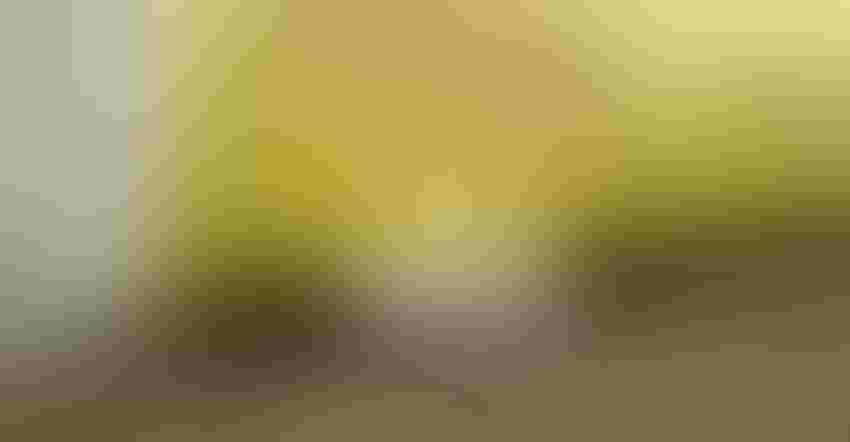 Because torn module wrap presents a potential for introducing plastic into a ginning system, growers and ginners must stay aware of damaged modules like this one. Dr. Tommy Valco

The U.S. cotton industry is recognized around the world for many positives related to the fiber it delivers to the global cotton market. From sanctity of contract and a broad range of available fiber parameters and quality characteristics, to universal confidence in classing data, and a strong record of no contamination, all segments of the U.S. cotton industry have benefitted from the long-standing and diligently-earned reputation with buyers.

As more cotton producers across the cotton belt have continued to adopt on-board module-building cotton pickers and strippers that allow non-stop harvesting, the National Cotton Council has seen a marked increase in complaints from textile mills related to pieces of round module plastic found in baled fiber.

“This recent rise in contamination is placing U.S. cotton’s reputation in jeopardy, and the industry is reacting on numerous fronts to combat this challenging, but resolvable problem,” says Dr. Gary Adams, National Cotton Council president and CEO. “We continue to be proactive in our efforts to heighten awareness of this issue among those areas in cotton’s supply chain where this problem may be originating.”

The NCC has created an educational package that includes a multi-chaptered video to educate the different groups of employees involved in the production, harvesting, transportation, and ginning of cotton fiber. While this effort is obviously needed, and is an important aspect in any solution, a group of agricultural engineers at the U.S. Department of Agriculture Agricultural Research Service are collaborating on the design of a mechanical system that can be installed in gins to extract plastic contaminants before they reach the bale press.

On-board module harvesters are here to stay, so the issue becomes: What is the best way to deal with any ramifications surrounding plastic contamination moving forward? “The answer is: Engineer a system that will handle the flow rate of cotton through the gin while maintaining the ability to extract plastic contaminants,” says Dr. Greg Holt, research leader at the Cotton Production and Processing Research Laboratory, Lubbock, Texas. “That is exactly what we have been working to design, test, and deliver.”

Because of his expertise and experience in “computer vision” technologies, Dr. Mathew Pelletier, along with a team of ARS research engineers at the Las Cruces, N.M. Gin Laboratory, was consulted. Recommendations by Pelletier centered on a technology currently being used in the produce, recycling, and vegetable industries called “optical sorting” — which integrates machine-vision detection with pneumatic air-knife blow-off systems.

Optical sorters utilize cameras that identify objects by their color, shape, size, and various other properties. Pelletier designed a computer software program that allows cameras to recognize foreign objects that contrast to white cotton fiber. “Once we established the ‘accept’ or ‘reject’ criteria that will be translated from the optical sensors, a mechanism had to be designed to physically eject the foreign object, which in this case is an air-knife.”

One prerequisite on which the engineers were all in agreement entering the project was the final cost of the technology had to be affordable. “Margins are already tight for our ginners, so we have to make sure any viable system is not a huge capital expenditure,” says Pelletier.

The engineers next considered where the technology should be placed in the sequence of ginning equipment. Realizing the urgency to eliminate all contamination as early as possible, one feasible option was to configure it somewhere around the feeder apron — before the cotton (and any contaminants) slide down into the gin stand.

With multiple cameras in place, with each camera panning a lighted 16-inch section of the feeder apron, if a contaminant is detected, a signal will be transferred to activate the air-knife which will then blow the object out to a point in front of the gin stand so it may be seen, recognized, and discarded. At this point during the ginning process, cotton is “singulated,” or flowing in a consistent batt of fiber. “Placing the system at this point seemed to make sense, but testing was needed,” says Holt.

Pelletier traveled to the USDA/ARS Las Cruces Gin Laboratory and began hand-testing initial designs. After returning to Lubbock, Holt and Pelletier conducted live tests on a research gin by “spiking” the flowing cotton with half-inch to two-inch pieces of yellow, pink, and green colors, focusing primarily on the colors of available round module wrap.

The team’s first test results were encouraging, confirming a 50 percent to 75 percent range of success at removing the spiked plastics. Avoiding “false positive” identifications was critically important, because one false positive every minute could litter the floor in front of a gin stand with 1,000 pounds of seed cotton over a day of ginning. “That was just our first test,” says Holt. “We’ve gotten better results since those initial tests which was encouraging.”

In the latter part of 2018, a system was installed for beta testing at Meadow Coop Gin in Meadow, Texas. Gin owner Dan Jackson understands the importance of this research to the industry and was eager to work with the researchers. “It was interesting seeing the system perform,” says Jackson. “We wanted to see how it reacted to vibration, dust, and other mechanical and environmental factors.”

Another system under consideration, a dual-machine-vision camera prototype system, was installed on the module feeder at New-Tex Gin, at Plains, Texas. Utilizing the same software, this system stops the module feeder to allow the snowstorm of cotton to settle so an image of the contaminant can be taken. Then the feeder may be temporarily shut down so the contaminant can be extracted before it has a chance to become shredded into smaller pieces, and possibly end up in a bale.

The researchers are also evaluating other technologies besides this “machine vision” system. One other option is a laser diffraction system. “This system would be more expensive, so we’re concentrating on the visual identification system at this point because we want to deliver a cost-effective solution to the industry,” says Pelletier.

Because the USDA/ARS is purely a research and development organization, Holt has been searching for a commercial company that would be interested in manufacturing this type of technology. “Several of the companies I contacted initially just weren’t interested in adopting a commercial version of any system unless it was in the half million-dollar price range,” says Holt. “The last thing we want to do is place that kind of economic burden on a gin.”

One company that manufactures innovative equipment for the nut industries has shown initial interest and a willingness to listen to design details and understand the concern and importance to an industry that has such a tremendous impact on the U.S. and global economy.