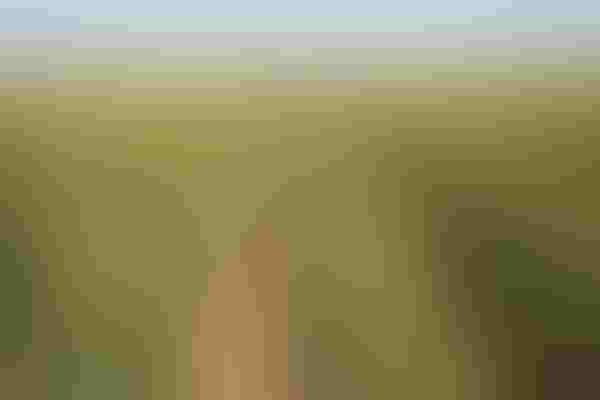 In the southern parts of Nueces County, and western parts of the Coastal Bend, grain sorghum is showing severe moisture stress and growers are asking questions about options or fate of this crop.

One reason we grow grain sorghum in the Coastal Bend is that sorghum is drought tolerant, but unfortunately we seem to have our share of droughts.  Currently we have grain sorghum at all stages of development, but most is in panicle initiation, just prior to flowering, at which time moisture stress can cause significant yield reduction.

So let’s review some factors that make grain sorghum so drought tolerant.  First, the sorghum plant has an aggressive root system with a higher root density that allows deep water extraction; in fact some research indicates that 90 percent of the total water used by the sorghum plant can come from a soil depth up to 5.4 feet.  However, most moisture comes from the top three feet of soil. Our problem this year is that we have very limited deep soil moisture as we learned from soil core samples we took back in February.  So we knew going into this crop year that if we did not get timely rainfall after planting, our crops could become moisture stressed.

In addition to a good root system, other drought tolerant traits of grain sorghum include stomata that remain open at a wide range of leaf turgor, and stomata that close at higher levels of stress, thus avoiding further water loss.

Also leaf roll, occurring now, avoids further water loss by decreasing the surface area of leaf contact with radiation. This leaf roll usually begins after 10 to 14 days of water stress.  Yet with all of these traits, when there is no water, the crop suffers badly.

At some point the moisture stress becomes so severe that the plant reaches a point of no recovery, even if rain begins soon. So when has the crop reached a point that calling the insurance adjuster to the field is justified?  According to USDA Grain Sorghum Loss Adjustment Standards Handbook, http://www.rma.usda.gov/handbooks/25000/2010/10_25210.pdf, grain sorghum has reached the permanent wilting point when plants are damaged to the point that the leaves remain tightly rolled throughout the night and the four lower leaves of the plant are brown and brittle and during the day and will crumble when rolled between the hands.

The bottom line is, when the crop reaches the permanent wilting point, the crop is done. So if you have grain sorghum leavesthat are crispy dry in the early morning after having overnight relief and then remain that way throughout the day, you can pursue the permanent wilt cause of loss with your crop insurance.

Could you harvest the stressed crop for hay? Yes, that would be one possibility, but there are factors to consider. Before you do anything to your crop, be sure to check with your crop insurance provider.

Drought-stressed crops like grain sorghum and corn may result in the accumulation of nitrate at levels toxic to livestock. Nitrates naturally occur in plants.  At normal plant nitrate levels, rumen microflora convert ingested nitrates into microbial proteins that are then used by the animal. When uptake of nitrates exceeds the rate of use to sustain rapid growth excessive accumulation may occur, as is typically the case when plants are stressed due to drought.

Even though sorghum or other plants may not be growing, they are still accumulating nitrate. Moreover, accumulation may be amplified when high rates of nitrogen fertilizer were applied prior to the stress period.

Nitrate toxicity is often associated with sorghum hybrids, Sudangrass, Johnsongrass, sorghum-Sudan hybrids, corn, and careless weed (pigweed). If you produce or plan to use any of these crops for hay, testing for nitrates is strongly recommended when the crop is produced under conditions of moisture stress.

Research at the Texas Veterinary Medical Diagnostic Laboratory at Texas A&M University has found that it is safe to feed forage containing up to 1 percent nitrate (on a dry-matter basis) to healthy ruminants.  Forage with a higher percentage of nitrate could be fed if it is ground and mixed with low nitrate forage to reduce the overall nitrate levels to less than 1 percent (dry-matter basis).

Forage containing 0.5 to 1 percent nitrate should not be fed to weakened cattle unless your veterinarian has approved it. The 1 percent nitrate level assumes that cattle are healthy, well-conditioned, and being fed a high-energy diet.  An online reference, Nitrates and Prussic Acid in Forages, can be found at the web site; https://agrilifebookstore.org/ by typing E-543.

If forages contain too much nitrate the animals cannot complete the conversion process to protein and nitrite levels build up. The result is the formation of methhemoglobin, which can cause an animal to die from asphyxiation, or lack of oxygen. The animal’s blood turns brown instead of the normal bright red.

When sampling for nitrates, remember that nitrate accumulates in the lower stem, and the least is found in the leaves. If sampling corn, grain sorghum, and sorghum-Sudangrass standing forage, create a composite sample from plant parts taken from at least 10 to 15 areas with the same fertility and moisture conditions. Do not mix plants from “good” and “bad” parts of the field.

Create different composite samples for these areas. Ship samples to the laboratory in clean paper sacks. Do not use plastic bags because the high moisture content will cause the samples to mold, which interferes with the nitrate analysis.

To sample corn, grain sorghum and sorghum-Sudangrass in bales, the bale must be split open and the lower stems of individual plants must be collected. If the bale is going to be ground before it is going to be fed, then representative core samples can be taken with a bale probe.

Samples can be submitted to the Texas AgriLife Extension Service Soil, Water, and Forage Testing Laboratory. Submittal forms are available online at http://soiltesting.tamu.edu.