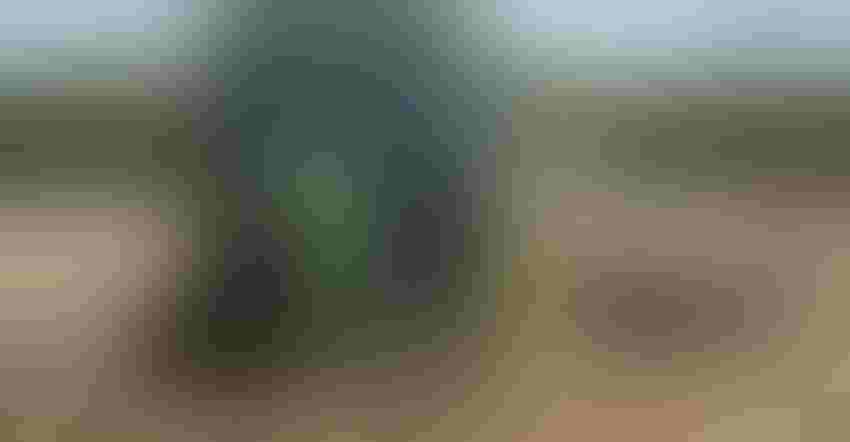 IN THE ROWS: By planting soybeans down the old rows, the corn residue provides a mulch to reduce erosion, evaporation and crusting.

In no-till, planters need to cut and handle residue, penetrate the soil to the desired seeding depth, establish proper seed-to-soil contact, and close the seed-vee.

Keeping these four items in mind, producers can evaluate the strengths or weaknesses of their planter and make any adjustments or changes necessary to make no-till successful.

Fortunately, most planters can be used for no-till with few, if any, modifications when paying attention to the following tips:

Maintain sharp openers. Double-disk openers, when properly maintained, can cut through residue without coulters or residue movers. Adjust the disks so they work together as a single cutting edge with about 2 inches of contact on standard disks or about 1½ inches on heavy-duty, thicker disks. (Staggered disks should be adjusted to just touch.) If hair pinning residue is a problem, increase the planting depth some to improve the residue cutting angle of the disks.

Don’t seed between the old rows. By planting down the old rows, seeds will be placed in the most biologically active area of the field. Decaying roots from last year leave channels in the soil for new roots to grow in. Avoid planting in the wheel track from last year as that is the most compacted area in the field, and this increases tire wear by driving on the old root stumps. Planting about 4 inches to the side of the old row works well for corn-on-corn where uniform depth control is critical.

Watch planting speed. Keep the speed about 5 miles per hour to reduce planter unit bounce and deliver the seeds uniformly. Be wary of ads that say a planter can "meter seed" at 7 to 10 miles per hour. That doesn't mean it can deliver the seeds to the soil uniformly at higher speeds, especially on rough fields. Often, the resulting nonuniformity from operating at higher speeds reduces yields enough to justify a larger planter (or a second planter) to complete planting in a timely manner.

Increase the down pressure. Residue from no-till, especially in hard, dry soil, requires down pressure springs or airbags and extra weight on the planter (as necessary) to cut through and penetrate the soil to achieve desired seeding depth. Enough down pressure should be put on the row units so that the depth gauge wheels actually are gauging planting depth.

Close the seed-vee. The seed-vee should be properly closed for good seed-to-soil contact and to reduce drying out of the seed zone. Spoked closing wheels often are added to planters to help close the seed-vee. They serve three purposes: drying the soil with tillage, closing the seed-vee while fracturing the sidewall and providing loose soil above the seed to reduce the chances of the seed-vee opening back up as the soil dries. However, the tillage from the closing wheels might dry the soil too much. In some cases, growers get better results using one spoked wheel and one regular wheel. Also, some closing wheel brands have less aggressive spokes than others, and some provide some soil firming to reduce drying.

Level the planter. The planter should be level to slightly tail-down in back, with the toolbar at the proper height so that the parallel links run parallel to the soil surface. When operated tail-down, the cutting edge on the double-disk openers is in a better position to cut residue on the soil surface. Also, when the planter runs nose-down, the tail assembly of the closing wheels doesn’t run level. As the pivot point of the closing wheel arm gets lower (either by leveling the planter tail-down or by planting deeper), the angled closing wheels have more of a pinching action, and they do a better job of closing the seed-vee.

Consider planting deeper. Planting the seeds deeper puts them in a more buffered soil environment with more uniform temperature and moisture. This improves uniformity of emergence, which increases yields. Also, the root system is better established, improving standability and allowing the plant to better handle stresses. Corn should be planted at least 2 inches deep as most corn planters were designed for planting depths of 2 to 3 inches. Consider a 3-inch planting depth in dry soils and low residue conditions to reduce the chances of the seed zone of drying out.

Jasa is a Nebraska Extension engineer.