Corn Watch: A return to dry weather appears to have thwarted the advance of disease. 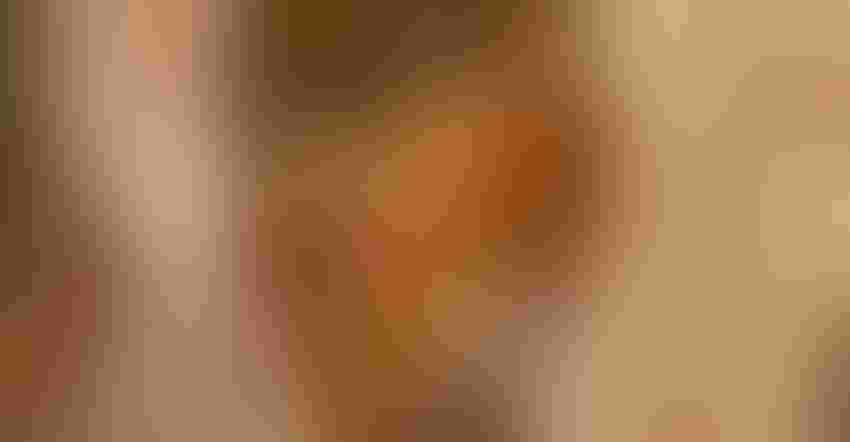 MINIMAL MOLD: There are traces of white mold showing on kernels on the tip of this ear. Overall, symptoms did not advance since other ears from the same field were checked and mold was discovered five weeks earlier. Tom J. Bechman

The ear mold situation looked dire in the Corn Watch ’22 field five weeks before harvest, just as corn reached black layer. A count of 50 consecutive ears at two spots selected at random indicated that just over half of all ears showed signs of at least some visible mold infection, primarily white mold. In fact, ears from the field sent to the Purdue Plant and Pest Diagnostic Laboratory in West Lafayette, Ind., were confirmed to have both gibberella and trichoderma ear rot, with gibberella most dominant.

Dave Nanda, director of genetics for Seed Genetics Direct, sponsor of Corn Watch ’22, says finding that much mold that early before harvest is significant for a couple of reasons. First, molds like gibberella and fusarium can produce mycotoxins, including vomitoxin. This can affect livestock, especially hogs, and also humans.

Related: What story can one ear of corn tell about a season?

Second, if you store grain on the farm, corn infested with molds can be harder to store properly. Indeed, grain storage specialists recommend running corn suspected of containing mold through a dryer with a minimum plenum temperature of 180 degrees F. It’s also important to dry corn to at least 15%, and to 14% if it will be held in storage for several months. Getting the corn cool as soon as possible can also help retard mold growth.

Fast-forward five weeks to late October. Grain moisture dropped enough to harvest without large drying costs or docks. What did the mold do?

Surprisingly, multiple ear checks indicated that although a high percentage of ears still showed some presence of whitish mold, it had not advanced. In fact, it was limited to areas between tips of the kernels on many ears.

What happened to the mold? Here is one key observation. The field received only 0.1 inch of total rainfall during that entire period. The rainy spell from Aug. 1 through early September that made for good grain fill —but that also was ideal for mold growth — ended.

Nanda notes it’s likely that had rains continued, mold growth and sprouting of kernels, also observed in some ears earlier, likely would have continued as well. However, a return to super dry weather likely thwarted further development of molds and sprouting.

Nanda underscores these five points, however:

3. Inoculum can still overwinter. Depending on which ear molds were present, inoculum could overwinter in residue and be present next season.

4. Assume elevators will check for mycotoxins. Reports from growers indicate some elevators were checking for vomitoxin. Dock schedules may vary by elevator. According to farmer reports, vomitoxin at various levels was detected in some samples.

5. Ask your seed dealer about disease resistance. Having a conversation about possible resistance or susceptibility to ear mold is still a good idea, Nanda concludes.