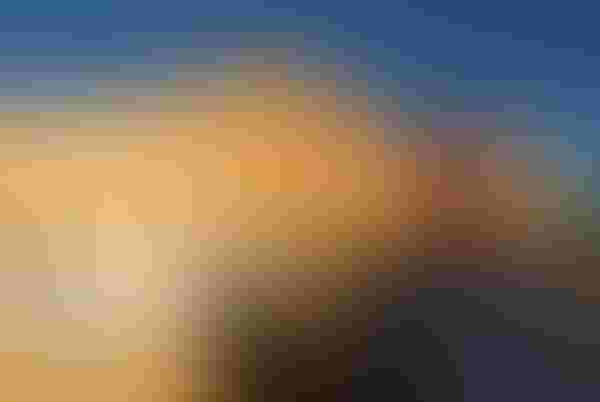 Paul Evans stands in a lush corn field on the Ute Mountain Ute Tribe Farm and Ranch and marvels at the changes on this ground over the past 20 years. A couple of decades ago, when he came to the 597,000-acre reservation in the southwest Colorado desert near the New Mexico border, this land near the toe of Sleeping Ute Mountain produced nothing. Zip. Nada.

The place was filled with life as only the desert can, but it was brown, sandy, rocky and nothing of economic value grew between here and Shiprock, the famed geologic formation in the distance. So how does the farm, managed by Evans, manage to coax 300-bu. corn out of this parched land that averages 5-7 in. of rainfall yearly?

Irrigation. This 7,700-acre farm is less Story County, Iowa than Al-Fayoum Oasis, an island of green in the Egyptian desert brought to life by ditches filled with Nile River water. In the Utes’ case, the water arrives via a wide canal 41 miles long, pumped south from McPhee reservoir on the Delores River, bringing a wealth of water from the slopes of the Rocky Mountains.

The Utes won a water-rights lawsuit in 1988 that recognized their historic right to the water. About 24,000 acre-feet gravity flows to the farm each year and through 110 center pivots.

Soon after the tribe won the lawsuit, Evans got the job as farm manager. That entailed making a farm from bare desert. He had worked for Servi-Tech, a Kansas-based crop consulting company, dealing with farmers in Ft. Morgan, Colo., Pratt, Kan., and Mt. Hope, Kan.

Just when machines started rolling hard on the project, they encountered Anasazi ruins dating back 700 years in an area known as Cowboy Wash. The Utes consider Anasazi ruins holy places, and current laws require bringing in experts when encountering ruins. The archeologists soon arrived and spent the next three years and about $3 million excavating. Meanwhile, construction continued on the rest of the farm.

Starting from scratch perhaps gave the farm some advantages. Evans and his co-workers had no mistakes by previous managers to correct. They could begin with the latest technology. Soon, he realized the soil was highly productive when irrigated. In those early days, the farm’s irrigation manager, the late Bill Cone, worked out methods for efficiently applying water.

“Bill was a genius. That’s the only way to put it,” says Allen Phelps, the current manager of the high-tech computer-operated irrigation system. “A lot of what we’re doing now is his design. He walked me through it and showed me what to do. We developed a very cost-effective high-pressure system by decreasing pipe size and using a dual-valve combination. It’s pretty elaborate. We run 110 pivots with a three-man crew, including myself.”

Just how the entire project runs still enthuses Evans, all these years later.

“It’s all gravity flow. No pumps. We had to redesign valves and came up with these dual valves we’re now using. It was necessary to ‘farmer-ize’ things, you could say, to tailor things to what we needed. Engineers helped us some. We’ve been fortunate to have smart people working here. That’s the key thing, building a good team of people,” he says.

With water and good people, Evans soon realized, the farm had good potential. He wanted to push it to the max. Although he did not set out to make one of the nation’s top corn yielding farms, good management made it just that.

Over the past decade, it often placed high in the National Corn Growers Association yield contest. Although the farm has never won the national contest, it regularly places highly.

Last year it came in third nationally with 315.7 bu./acre in the No-Till/Strip-Till Irrigated category. In 2010, it was also third, with 335.93 bu./acre. In 2003, the farm came in second nationally, with 305.63 bu./acre. It has also done well in the state yield contest several times. Average corn yield across the farm runs in the 220-bu. neighborhood.

“We try to maximize every acre, to push each acre to its full potential. That’s because we’re in the business of trying to make a profit, and that’s the only reason.”

With high yields like that, it’s natural to think the soil possesses some sort of magic that, added with water, produces top crops. Not so, Evans says.

“These are not what most people would call good soils. They are high pH. They’re not bad soils–they’re just not great. It is a very nice farm, no argument there. What we’ve found is that if you have water and the right amount of fertilizer, you can make bad soil look pretty good,” he says.

They strip-till on 30-in. rows, planting for a population of 34,000 corn plants per acre. Fields tend to be low in organic matter, so they compost them.

“Our biggest problem in the fields is rocks. We run a mechanial rock picker, particularly on new alfalfa fields,” says Crop Manager Vaughn Cook, who joined the company seven years ago from southern Idaho.

“We face challenges. The rockiness costs us a lot of money to deal with. The weather is a big challenge, of course. I’ve always like reduced tillage. The strip-till works very well for us. It’s good for the land and we try to be good stewards. A lot of people say that but we really do. We try to balance being good stewards of the land and staying in business,” Cook says.

Through the years, Evans worked hard to build a good team. Cook is one key team member. Another is Simon Martinez, point man on the team. He too, has been here from the beginning, first serving as construction foreman developing the farm, now its operations manager and overseeing personnel. Martinez even worked for the engineering firm that built the reservoir dam, meaning he was in the area before the farm’s birth.

“It’s wonderful to have had this experience. To be able to literally bring this to life and see it become successful and play a role in feeding the world has just been a blessed thing,” Martinez says.

“We built on people,” Evans says. “We bring in people to manage our weaknesses. There are some things I don’t do well, so I find someone who does. The whole farm has to be a team. I don’t care that much about equipment–I care about who’s operating it. I’m not interested in high-tech for the sake of being high-tech. I’m interested in what it does.

“What we have here is a neat group of people. When we do something it’s because they’ve agreed to it. Our people are good at what they do and we never hesitate to send them to additional training when it’s appropriate.”

Ute Mountain Farm and Ranch Enterprises employs 18 full-time workers along with four or five seasonal employees. It produces 1,400 acres of corn, 1,000 acres of wheat, 700 acres of sunflowers and 4,500 acres of alfalfa.

“It’s owned by the tribe, of course, and we are training tribal members to be prepared to step into management roles,” Evans says.