Although it&rsquo;s only been three seasons since Scott Poen switched to no-till and strip-till, the soil is already responding. Splitting fertilizer applications has also helped. 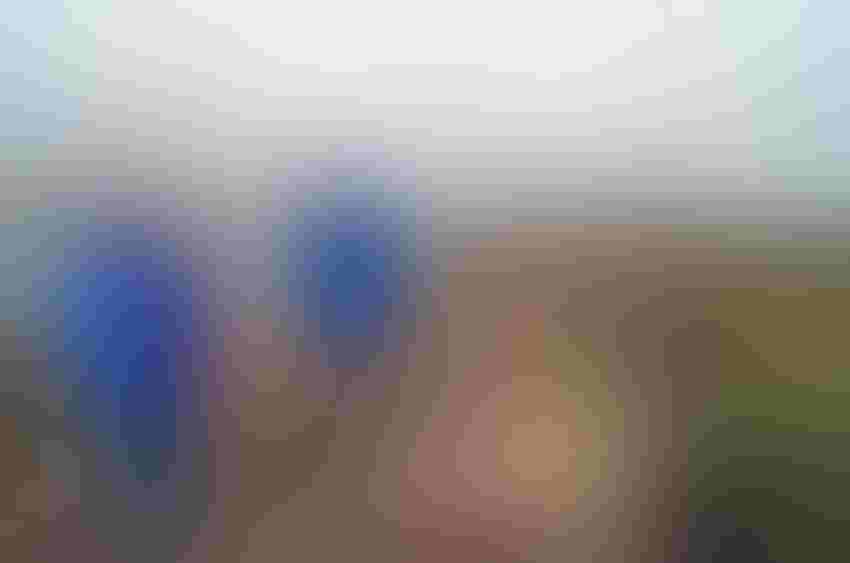 <p>Poen and Ritchie worked together on plans for a constructed wetland on Carnavon Creek, which flows through Bethune family land and empties into Black Hawk Lake. The wetland, which treats both surface and subsurface drainage water from a large area, was built with federal and state funds through the Iowa Conservation Reserve Enhancement Program (CREP). Ritchie donated a pasture and 15 acres of cropland for the project, which includes a 4-acre pond, a large dam, and a 24-acre grass buffer. Such wetlands are very effective at filtering nutrients and sediment, cutting nitrate loads by 20% to 50%. They also provide a home for wildlife.</p>

There’s more to the relationship between Scott Poen and Linda Ritchie than tenant and landlord.

Poen, a beginning farmer, and Ritchie, a retired medical technician, are also partners in conservation. The two are working together to improve soil health, productivity and water quality on Ritchie’s west-central Iowa farmland in Sac County.

Linda Bethune Ritchie grew up on the family farm near Black Hawk Lake and retains a deep devotion to this land, which her great-grandparents began farming in 1900. She left the farm to pursue her career, but returned to Sac City in retirement, and now manages her family’s farming interests.

Bethune Family Farms is part of the Black Hawk Lake Watershed, which covers more than 13,000 acres in Sac and Carroll counties — most of it row crops. The lake is on the state’s impaired waters list due to excess sediment and phosphorus.

Since 2012, the NRCS has been working with watershed farmers and landowners on a cleanup plan, part of the USDA’s National Water Quality Initiative. “Scott and Linda were early participants in this effort,” says Denis Schulte, NRCS district conservationist in Sac and Calhoun counties, “and have continued to do all they can on their property.”

Scott Poen’s dad, Wayne, farmed the Bethune family’s land for nearly 30 years. After Wayne died unexpectedly, Ritchie decided to give Wayne’s youngest son, Scott, a chance to start farming. Scott had been working with his older brother in the landscaping business in Texas, but wanted to return home to farm.

One of the main qualities Ritchie sought in a farm tenant was “someone who cares about the land and will take good care of it.”

Poen, now 30 and wrapping up his fifth cropping season, rents 500 acres from Ritchie and another 400 acres from his mother, raising corn, soybeans and hogs for Niemen Ranch. He’s “a progressive young farmer who is doing a lot of good for the environment and for the health of the farms that he operates,” says watershed coordinator T. J. Lynn, Sac County Soil and Water Conservation District, who helps farmers and landowners adopt new conservation practices.

Impact of tillage and fertility changes

Poen started out disk-ripping all his fields, just as his dad had done.

But he began to question the need for full-width tillage after helping his uncle harvest. “His yields were incredible. We weren’t getting anywhere near those yields,” Poen says, despite similar soils and terrain.

Poen’s uncle practiced a form of strip-tillage, banding nutrients and planting over the band, which he performed with row markers only — no GPS. That opened Poen’s eyes to the idea that “you didn’t have to turn over dirt to get a good crop.”

Poen asked a lot of questions and attended some strip-till meetings. In 2012, he and his uncle bought a Krause-Kuhn Gladiator 12-row strip-till machine, taking advantage of EQIP cost share incentives. “We learned how to run it together.” At the same time, Poen bought a Kinze no-till planter and eliminated all tillage for soybeans.

Ritchie, who regularly attends Extension meetings to keep up on farming trends, was 100 percent behind her tenant’s tillage changes. “I’m tired of seeing the soil blow. I support anything that helps save our soil.”

Although it’s only been three seasons since Poen switched to no-till and strip-till, the soil is already responding, he says. Water infiltration has improved, and he hasn’t had to fix any washouts on sloping fields. In the fall of 2014, which was very wet, “we never left any ruts in the fields.”

Poen also changed his fertilizer management. In addition to banding phosphorus and potassium — one of the biggest advantages of strip till, he says — he now splits his nitrogen applications. He puts down a portion in the fall as anhydrous ammonia, while building the strips. The balance is applied at V-3 as granular urea coated with a nitrogen stabilizer. His corn yields have climbed, he says, because “we’re losing less nitrogen.”

Poen is also experimenting with cover crops to further cut erosion and nutrient loss. This fall, he planned to drill rapeseed plus a legume after baling cornstalks, then spread solid hog manure over the top. The cover crop will take up the nutrients in the manure, releasing them “next season when the crop needs it.”

In addition to modifying his farming practices to be more environmentally friendly, Poen works closely with his landlord on permanent conservation improvements.

Ritchie’s father and grandfather installed nearly 14,000 feet of terraces, which Poen maintains. At a time when many farmers have been removing grass waterways within fields, “Scott has put in new grass waterways to control ephemeral gullies,” Schulte says. “This will aid long term productivity” by holding topsoil in place.

Poen and Ritchie worked together on plans for a constructed wetland on Carnavon Creek, which flows through Bethune family land and empties into Black Hawk Lake. The wetland, which treats both surface and subsurface drainage water from a large area, was built with federal and state funds through the Iowa Conservation Reserve Enhancement Program (CREP). Ritchie donated a pasture and 15 acres of cropland for the project, which includes a 4-acre pond, a large dam, and a 24-acre grass buffer.

Ritchie included her tenant in all the CREP planning meetings. Even though it took some land out of production, “I thought it was a good idea,” Poen says. “It will be a huge benefit to the lake.”

Ritchie and her family also stabilized the banks of Carnavon Creek, which was heavily eroded and generated constant sediment flows to the lake, Schulte says. Over 1,200 feet of stream banks were reshaped to reduce the slope, and riprapped in key spots to hold banks in place. EQIP funds helped pay for the restoration, which cost $35 to $60 per linear foot.

Stream bank improvements can be a tough sell, Schulte says, because “you’re not losing productive cropland. It benefits the lake, but not necessarily the producer or landowner.” Still, Ritchie says, “It’s the right thing to do.”

Ritchie is eager to show the public what farmers and landowners are doing to protect soil and water. “I want to make a difference.” She’s especially proud of the CREP wetland. “This will help all of Black Hawk Lake.”

Says Ritchie: “I feel really good about the work that is being done on our farm to keep the watershed in better shape.”

This fall, he will install three tile outlet controls on an 80-acre field that drains into the Raccoon River, which supplies drinking water to Des Moines area residents.

Drainage water management allows the farmer to raise and lower the water table in a field using floats or stacked risers in the tile mains. Water is held back in the field during the winter and released at planting and harvesting time. During the growing season the water table can be adjusted for crop needs.

The practice reduces the total amount of water flowing through the tile outlet — and in turn, cuts nitrate losses. It also conserves water for the crop during dry spells. Iowa Soybean Association research found that drainage water management removed about 33% of nitrates in tile effluent.