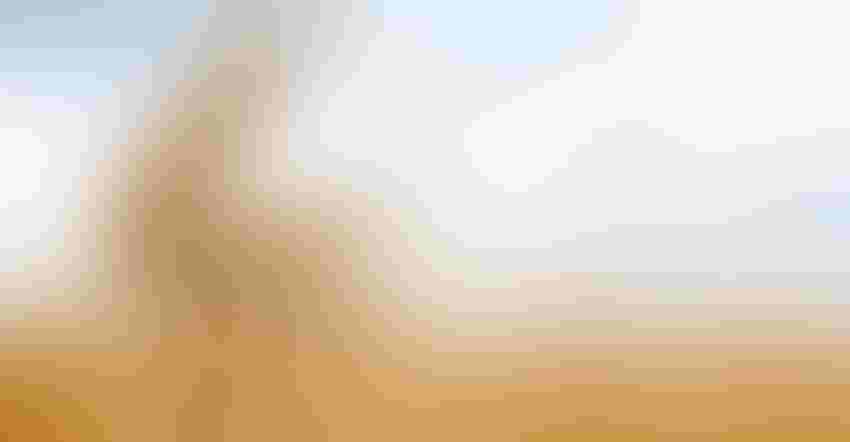 TOP YIELD: Brett Oelke, Hoxie, Kan., won first place in Kansas for his dryland winter wheat entry in the 2022 National Wheat Yield Contest. His entry yielded a whopping 106.34 bushels per acre, with just 4 inches of precipitation from planting to harvest. His entry also earned fifth place nationally in percent increase over the county average, according to contest coordinators.xalanx /Getty images

Triple-digit dryland wheat in northwest Kansas with only 4 inches of moisture this past summer seems impossible, but fifth-generation farmer Brett Oelke did exactly that — entering a plot of WestBred Grainfield near Hoxie that yielded 106.34 bushels per acre in the 2022 National Wheat Yield Contest. The entry earned him the top spot in Kansas for dryland winter wheat, and he was fifth nationally in percent increase over the county average.

“I was blessed by God,” says Oelke, who works together with his father and brother-in-law on their respective operations in Sheridan County. “That’s about the easiest way I can explain how I did it.”

The winning plot was planted with certified, treated seed — like every bushel in Oelke’s operation — into the northwest corner of a field with five pivot corners, thanks to two circles that touch. The corners were summer-fallow, having been planted to dryland corn in 2020. While there wasn’t enough moisture to help make a good seed bed, Oelke remembers chomping at the bit to start planting as soon as the rain came.

“We had everything ordered and ready to go and drills were prepped,” he says. “We just needed that one rain to where we could go seed our wheat.”

“We got lucky — God helped out and gave us 2, half-inch rains back to back about three days apart around the first of October. We shut everything off, and we just focused on getting our wheat crop in the ground.”

Then, the crew went back to cutting soybeans and drilling irrigated wheat. An amazing stand of wheat grew, despite being short on moisture.

“We had right at 1 inch of rain out of those two showers; that gave us a great stand that looked good going into dormancy, but we just never got another rain,” Oelke says. “We got a skiff of snow forecasted, so we went out and sprayed all our herbicide on — but if it had 10 points of moisture in it, I’d be surprised.”

Spring arrived, but still no more moisture. Oelke typically waits until jointing to fertilize with nitrogen, which was around April 1 for the plot. The field didn’t receive any moisture until three weeks later, when another half-inch of rain fell.

At this point, it was time to decide whether or not to enter the National Wheat Yield Contest. Oelke was skeptical, but his seed dealer’s boss, the regional territory manager, convinced him it was worth a shot. Then in May, another 1-inch rain fell right after Oelke started to see beards coming out of the boot. He immediately sprayed a fungicide and applied a foliar feed nitrogen to the flag leaf. Then, the weather turned hot, miserable and windy during the rest of heading, flowering and into early grain fill.

On the first Saturday in June, there was only a small chance of rain, but it was enough.

“By the luck of God again, we got 1.6 inches,” Oelke says. “Then, that was it. Those four moisture events are what this wheat crop lived on for its entire life. It didn’t have more than 4 inches total precipitation, but it was more about the perfect timing that we were blessed with — and that’s how we raised such good wheat.”

At this point, Oelke knew he had good wheat despite the conditions. He used to work as a crop consultant, so he is always walking fields and pulling heads. But he was guessing the wheat would make 50 to 60 bushels per acre — maybe 70 bushels per acre in some spots.

The plot was in the last field of dryland wheat the crew harvested. The crew started cutting in the southwest, working to the southeast, to the northeast and finally to the northwest. And the yield monitor in the combine started to skyrocket as they moved. Oelke remembers his father, who runs the combine, kept recalibrating the yield monitor all throughout harvest, asking if something was wrong, because there was no way they were cutting 90-bushel wheat.

Oelke laid out a couple of plots in those top corners, but he was running the combine in the northwest corner when the final plot topped triple-digit yields and scored his winning entry of more than 106 bushels per acre.

“Everyone thought we were crazy for spending money on wheat this year, because it’s all going to burn up and die anyway,” he says. “Our philosophy is, I want to give the wheat the best opportunity I possibly can. Yes, Mother Nature always has the trump card. But if I’m holding it back, it’s not going to come to its fullest potential if it would ever rain.”

From religiously planting certified, treated seed to playing “mad scientist” on his kitchen table with his friend Eli Kuhlman of Five Star Ag to create their own fertilizer blend, Oelke encourages fellow producers to experiment — and when they find something that works, replicate it across their entire operation.

“We’ve just stuck to what we know has worked in the past and let the cards fall in Mother Nature’s hand,” he says.

That’s the same strategy Oelke is using this year — and so far, it’s paying off, with great stands of wheat yet again. If the right parts of Sheridan County would just get a little more moisture this year, he may achieve his new goal of 150 bushels per acre for irrigated wheat and duplicate this year’s dryland success.

“God gave us that one rain we needed to drill wheat, so we shut everything off again and drilled every acre of dryland we had,” he says. “Honestly, it’s setting up about like 2021 all over again —  so if we can just get a little more rain during the spring and during grain fill, I feel pretty good.

“We’re very fortunate. I know most of the state of Kansas isn’t this way. We just lucked out and got that one rain — just like last year — put all our wheat in, and we have phenomenal stands currently.”

Debes is a freelance writer for Kansas Wheat.