&bull; John Vollmer, along with his wife , Betty and son Russ, operate Vollmer Farm in Bunn, N.C.&bull; Though he has been in agriculture all his adult life, John Vollmer&rsquo;s venture into organic farming is an ongoing 30-plus year process. 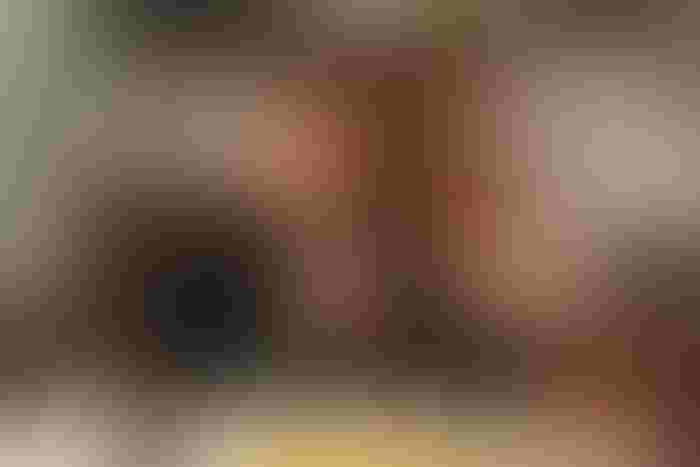 Coming over from the dark side may be a bit of a dramatization as to how North Carolina grower John Vollmer got into organic farming, but he did move from selling agricultural chemicals to growing crops without them, and is in the process of rewriting the book on sustainable, profitable small family farming.

Vollmer, along with his wife , Betty and son Russ, operate Vollmer Farm in Bunn, N.C. Though he has been in agriculture all his adult life, his venture into organic farming is an ongoing 30-plus year process, he says.

While a student at North Carolina State University, Vollmer got a part-time job with Phil Upchurch in the Weed Control Lab. Another pioneer in the science of chemical weed control, Harold Coble, was a graduate student and close friend of Vollmer.

From his work with weed control, he got a job after graduation with Elanco Products Company, and worked his way up the corporate ladder. Then, he says he got homesick and returned home to North Carolina to farm and be a dealer and a custom applicator.

For a decade, he ran a thriving business, serving at one time more than 250 farmers in a small area around Bunn, where he now lives and farms.

Within 20 years there remained less than a dozen or so farmers in the same geographic area.

The amount of farmland remained fairly much the same, but the number of farmers was dramatically less. This scenario spelled the end for small, independent dealers, and by the early 1990s Vollmer saw the writing on the wall for his business, and he began to look at his options for making a living farming.

By the time he got out of the agrichemical business, the Environmental Protection Agency and other environmental groups were beginning to take a closer look than ever before into the impact of chemicals on the environment.

“We weren’t blind to the negative impact some of these chemicals could have on the land. In ditches where we cleaned spray tanks and dumped chemical residue, nothing would grow there. However, in a short period of time, those areas recovered. I learned a valuable lesson from that aspect of our business— that if we do what we should do to grow crops, the land will take care of itself,” Vollmer says.

“I’m not an organic purist, because I do see the value of agriculture chemicals. At the same time, there is often a different way to be successful in farming without using chemicals or choosing products that have the least impact on the environment.

As a small farm, we are able to compete and to do that. We have found that farming with reduced chemical inputs and approved organic pesticides is a more profitable way to do things,” he adds.

To be a small acreage farmer and to be profitable enough to support two families requires that each acre of land produce at a high level and produce crops that have a high value.

The main production area of the farm is now organic, and the Vollmer Family has created some unique marketing strategies that are married to these production practices.

John and Betty started off growing two acres of organic strawberries and have since added blueberries and blackberries to the farm. Over the years they have added a number of crops, a pick-your-own operation, and with son Russ, they added a farm store and agritourism business.

George Washington Carver developed the concept at Tuskegee University back in the 1920s and 1930s. Carver said growers could grow $30,000 worth of crops per acre. Vollmer says he uses the same strategy, shooting for a goal of $40,000 of gross income per acre.

Strawberries are the focal point of the operation. It’s the one crop that stops people who drive down the road past the farm.

Vollmer Farm has a thriving pick your own operation in blueberries and blackberries. They have only 2,400 blueberry plants, but they produce an amazing amount of product.

Blackberries are the same — on 300 plants the farm sold $15,000 in product in the second year with the crop.

A combination of 100 acres of land owned and another 70 acres of rented land provide enough land to rotate crops and keep organic certification in place. Despite having more land available, Vollmer says he tries to keep total annual production to about 30 acres or so.

Vollmer’s organic tobacco transplant crop is sold to six growers who grow tobacco for Santa Fe Natural Tobacco Company, which is a world leader in production of tobacco products from organic tobacco and also from additive-free tobacco.

All his vegetable transplants are grown in one of two 7,000 square foot greenhouses. Growing tobacco is not much different from growing tomatoes, peppers, eggplant and other plants in the same family.

He also sells a significant amount of his vegetable and fruit crop via a Community Supported Agriculture, or CSA program. He started with 75 families and expanded to 300 last year, but found quickly that 300 was beyond his ability to service adequately.

In 2012, Vollmer Farm will provide farm produce to 250 families in close proximity to Bunn, N.C.

The CSA concept started in Japan in the mid 1980s. In the U.S., the concept has grown to 3,000-4,000 farms. There are also hybrid groups, like Produce Box in Raleigh that have over 4,000 members. Vollmer sells excess from his CSA farm to Produce Box and to other farms that operate CSA‘s .

Customers sign up in the winter and spring and pay in advance. He uses the cash flow from the sign-ups to pay labor and other costs when he doesn’t have cash flow from his other crops.

Now in their sixth year, Vollmer says he has always been able to deliver the crops customers sign up for long before the crop is planted.

For 20 weeks, families can buy a big box or a small box. What’s in the box is what’s in the CSA garden.

A small box costs $425, and the value of what is in the box ranges from $21-$25 per week, based on retail prices. The cost is comparable to what a person could buy the same amount of food for in a grocery store — maybe slightly less — but it’s the quality and freshness that his customers want and are willing to pay for, Vollmer says.

“We start in the first weeks with strawberries, asparagus, carrots and other crops that mature early in the spring. It takes a lot of planning to know what crops come off and what time, so that there is a constant change in food items in the box,” he adds.

Boxes of food are delivered to six sites each Tuesday and six on Wednesday of each week and member families come to a location that is closest to them to pick up their food.

Each box will have 5-7 items, and the higher the value of the crops, the less the weight of the box.

Amazingly, the Vollmer’s grow enough food to supply 250 families on five acres of land. Some of the land is double- and triple-cropped and some has a combination of crimson clover and oats as a cover crop. Weeds don’t have much of a chance to compete in the cover system we use, Vollmer says.

Limited in what can be used

“There are plenty of times when I long for a jug of Roundup,” Vollmer laughs. “We are limited to using naturally occurring pesticides that are OMRI approved. Just because they are listed by OMRI (Organic Materials Review Institute) that doesn’t mean they work, he adds. I would have to say that most conventional pesticides work better than OMRI approved products.”

Vollmer has made just about everything work on his organic farm, but he notes he’s been in conversion from conventional to organic for more than 15 years. There is a purpose to the conversion, and one the North Carolina farmer contends should be valuable to any farmer, regardless of what crops he or she grows or how they grow their crops.

“Every farm, in order to have some succession, has to have a profitable enterprise that will support the next generation. Without a sustainable enterprise, it’s like a noose around the farmer’s neck. So, there is little wonder that new heirs to a farm quickly sell the land for other purposes, Vollmer says.

Vollmer, who is a third generation farmer, has provided the impetus for his children and grandchildren to make a living as the fourth and fifth generation of Vollmers on the family farm.

In recognition of his years of work with organic crops and for his pioneering production and marketing practices, Vollmer and his wife Betty were named Farmers of the Year for 2011 by the Carolina Farm Stewardship Association.

Betty has always played a key role in the farm operation doing all financial  and accounting work along with being a great mother to four children .

For anyone contemplating getting into organic production, Vollmer says count on spending a lot more time both in production of organic versus conventional crops, but more so expect to spend much, much more time keeping pristine records to validate organic status.