When these diseases affect plants late in the season, is it something to worry about? 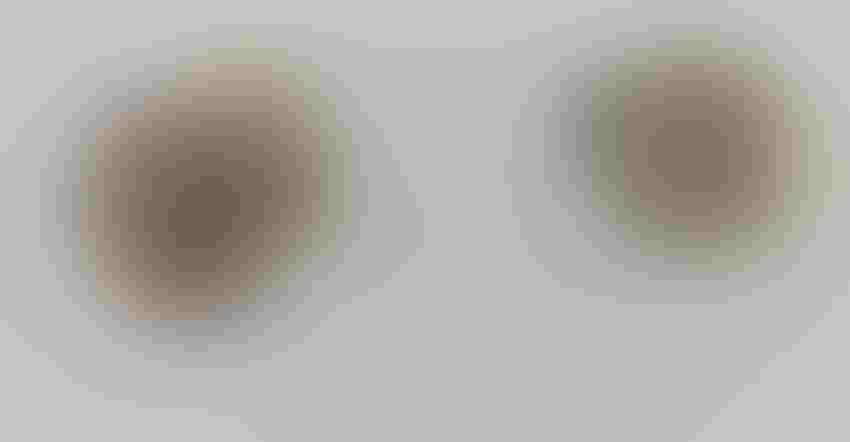 For the most part, late-season rains are considered more of a blessing than a curse. However, this year's excessive late rains in Nebraska and across the Midwest saturated fields, held up harvest and, in some cases, provided an ideal environment for fungal diseases.

As a result, some growers found discolored, purple-stained or damaged soybeans in pods this fall. So, you may be asking: When these diseases show up this late in the year, is it a problem? If so, is there anything you can do about it?

Those purple seed stains growers saw in their fields this year are caused by Cercospora kikuchii, the same fungus that causes the more visible part of the disease, Cercospora leaf blight.

"In general, we don't usually worry about this disease. It's pretty common at low levels, but usually not a major threat to our yield," says Tamra Jackson-Ziems, Nebraska Extension plant pathologist. "It was much more common this year, however, and has caught people off guard."

When diseases occur this late in the year, it's usually too late to do anything about it in the current growing season. While Cercospora leaf blight and purple seed stain are difficult to manage with fungicide applications, they typically don't pose a problem for yields, and the impact on grain quality usually isn't enough to warrant concern, Jackson-Ziems notes.

However, Loren Giesler, head of the University of Nebraska-Lincoln's Plant Pathology Department, notes frogeye leaf spot was also a problem this year. It's worth keeping in mind that frogeye leaf spot is caused by Cercospora sojina — a similar, but different pathogen. "These are two different Cercospora species, and they don't overlap. One won't cause the other," Giesler says.

Frogeye leaf spot fungus can also infect seed, and seed quality can be impacted under extremely high disease severity. It can also have a big impact on yield, and is a bigger concern over the long-term, since it can overwinter on residue.

"There were low to significant levels of frogeye across the eastern third of the state. Some cases were pretty severe," Giesler says. "It's a disease that survives on residue. So if you have a history of it in the field and you're growing a susceptible variety, you're looking at a fungicide application. It's an in-season input, so there's nothing growers can do now, but it's worth noting for next year."

It wasn't just Cercospora that was a problem this year. Wet conditions led to several late-season diseases that impact seed quality, including pod and stem blight caused by Phomopsis and Diaporthe, and seed decay caused by Phomopsis. These fungi also survive on residue, and Giesler and Jackson-Ziems advise keeping track of fields with a history of these issues. Pods are only affected with the right conditions during pod fill. While fungicide applications can help, it's usually only recommended if seed is being saved.

"Poor seed quality and Phomopsis are indicators of other stresses. It could be poor conditions during pod fill. I saw plenty of plants that had small seed up top and normal below, indicating stress late in the season," Giesler says. "This year, we really had a perfect storm for poor seed quality. A lot of fields were wet early, so there was some root infection. Then we had high temperatures during pod fill, and the combination of those two things put a lot of stress on the plant."