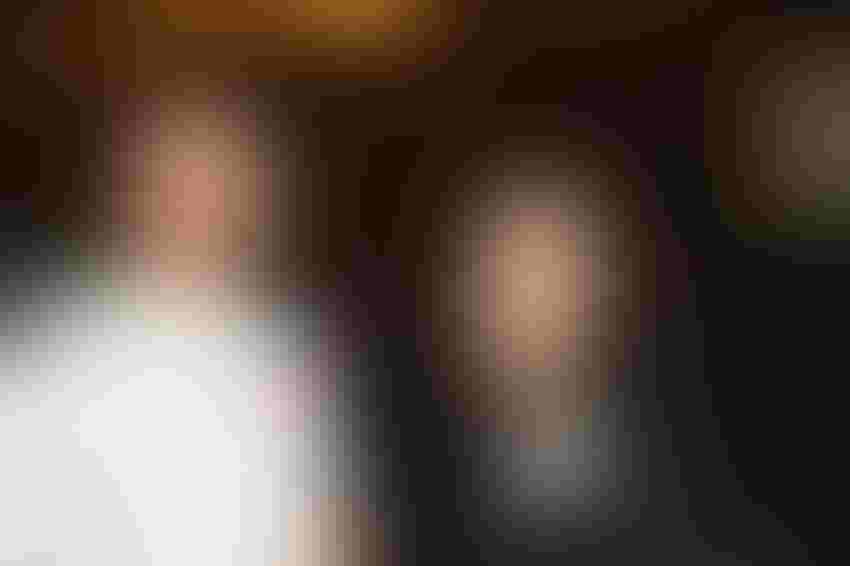 <p>James Henriksen, a microbiologist with AgBiome in Research Triangle Park, N.C., discusses phytobiomes with Gwyn Beattie, a professor of bacteriology at Iowa State University and a leading expert on the phytobiome, during the Stewards of the Future Conference held at North Carolina State University.</p>

Phyotbiome is a word unfamiliar to many, but with the daunting task of feeding a population that is expected to reach 9 billion people by 2050, understanding how plants relate with the complete environment may be vital.

Phytobiomes consist of plants, the environment and the associated communities of organisms and microorganisms. Gwyn Beattie, a professor of bacteriology at Iowa State University and a leading expert on the phytobiome, discussed how the phytobiome can be used to increase food production at the Stewards of the Future Conference on microbiomes  at North Carolina State University Oct. 20.

“If you think about a plant growing, it doesn’t grow by itself. The plant is growing in association with a large range of microorganisms; many of them are able to confer benefits on the growth of the plant,” Beattie said.

“We’ve known for a long time that there are organisms that provide nitrogen and fungi and bacteria that can provide phosphorous. But the interactions of a lot of organisms aren’t known, and when you think about the fact that all of these microorganisms and macro organisms are also living in communities with insects and birds, it becomes complex.”

Phytobiome research is still in its earliest stages, but Beattie, who serves as policy chair of the American Phytopathological Society, said APS held meetings of thought leaders from around the world to determine how the phytobiome can be utilized to double food production by 2050.

“The thought leaders sat around for a couple of days and we talked and we talked,  and we eventually came up with the idea that the time is right for a a truly systems approach to agricultural production,” Beattie said.

Phytobiomes focuses more on the system where farmers can determine the best plants to grow at a given location at a given time. Beattie said by understanding the complete system, they can tailor ways to sustainably produce crops.

In addition, agriculture research must also focus on a systems approach to increase crop yields, Beattie stressed. She said the phytobiome allows for an interdisciplinary approach to increasing food production. The goal is to eventually identify the genetic linkage between the different components of the system.

“Are there genes in plants that we can actually select for benefits? Can we breed a plant so it accepts the microbes? Can we breed a microbe so they provide greater benefits?” she asked. “Can we  develop biologicals and predictors of crop and soil health so we know when we have reached a resilient community?”

In addition, Beattie said  phytobiomes can provide a way to rehabilitate degraded soil. “We think we can increase the resiliency of the cropping system by managing the phytobiome, increasing our pest control practices and really put biologicals into our site specific management,” she said.

Still, funding for phytobiome research remains a challenge. “There is $13 spent on medical research for every dollar spent on agricultural research so this is a very big uphill battle. We have been working with the Foundation for Food and Agriculture, but the money has to be matched so  they are looking for ways to find at least one-to-one matches,” Beattie said.