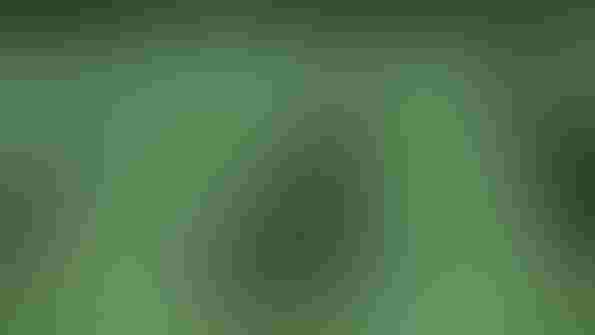 Getting the most from a bag of soybeans has become an obsession for Tom Tullis, farmer from Champaign, OH. And he’ll try anything to get that extra bu./acre. In the past five years, Tullis says he’s defoliated beans, experimented with seeding rates and even bush-hogged plants after first bloom. He’s also tried inoculation, foliar feeding and micronutrients, as well as pivot irrigation, fungicide and bean burndown.

“We felt there is more potential in today’s varieties than we’re getting,” he says.

Tullis thinks the 105 bu. yield was due to the bean size rather than an increase in the number of beans per plant.

“The beans were actually raised for seed production, but they couldn’t use them because they were too big. There were 2,050 seeds/lb. They were huge,” he says.

The defoliation and bush-hogging were attempts to shut down leaf production, Tullis says, to concentrate plant resources on increasing the number of nodes that become pods.

“Soybeans have two missions in life,” he says. “Being a legume, it wants to make foliage. But you want to trick that plant into thinking it needs to reproduce.”

Sometimes an idea that is good on paper doesn't always work in the field, says Champaign County (OH) Extension Agronomist Harold Watters. Protecting the nodes and pods is important. Two or three more pods are produced than are matured. But it’s also a balancing act because the leaves play a critical role in filling out the pods late in the season.

“It’s logical to try to produce more pods and fewer leaves to increase yields, but reducing stress conditions is more important,” he said. “We need to think about this backwards: Remove the early stress so we don’t lose pods.”

Reducing early season stress will help node production, which can affect flower retention and pod production. Also, what works in small plots with many resources and lots of time probably won’t be practical for farmers when expanded to the approximately 75 million acres of soybeans planted each year, he adds.

Tullis’ high-yield mark is exciting, but his consistent harvest in the 90-95-bu. range is more promising because it’s more likely to be replicated, Watters says.

The first step in increasing soybean yields is to follow the basics when planning and planting soybeans, he says. For Watters, the basics include an early planting date, variety selection, seeding 15-in. rows and reducing as much plant stress as possible.

Some stresses, such as the weather, can’t be controlled, although irrigation and tiling help. Disease pressures can be mitigated with the variety selection, and frequent scouting can help keep insects in check. Most importantly, growers need to get out into the field in early spring.

An early planting date is earlier than many farmers might think. In Ohio, mid-April is when farmers should begin to plant, Watters recommends.

Another stress can be the soil itself. “For example, we have some compaction issues in Ohio, and that affects the root system,” Watters explains. “The more compaction you have, the less the plant is able to tolerate moisture and heat stresses."

Tullis says he uses cover crops to help increase soil porosity, and he used pivot irrigation in two fields this year to see if adding moisture during the hot, dry days of August would help remove plant stress.

He also applies 2 lbs./acre of manganese every two weeks. The results are promising, with plants having more and bigger pods than normal.

He claims he can see a noticeable difference, but this year a soggy spring kept most Ohio farmers out of fields until around Memorial Day. Tullis planted his 1,400 acres of beans six weeks later than normal.

“We really need to think about soybeans as intentionally as we do about corn,” he says. For a lot of farmers, soybeans are “just the second crop” compared to corn, he explains.

“There’s this longstanding perception that beans come after corn,” he says. “If we want to improve soybean yields, we have to think about them at the same level as we do corn.”

Casteel echoes Watters’ statements about the importance of covering the basics, but he adds a good foundation as a starting point. To him, “intentional soybean management” includes starting with the soil.

“I always start with, ‘What are your soils capable of producing?’ I see so many fields that have pH and potassium issues,” he says.“(Basic fertility) should not be a limiting factor.”

Also, farmers should know what they have in terms of soil pests, such as SCN and diseases.

“Growers can maximize their soybean yields by taking the time to look at varieties’ yield potential and yield consistency.”

Last, but not least, scouting is a farmer’s best tool for finding yield-robbing diseases and pests before they become unmanageable.

Additionally, while Missouri soybean farmer Kip Cullers, who set the soybean yield record of 160 bu./acre in 2010, receives a lot of attention for his yields, soybean farmers need to look at their investment in terms of dollars as well as time to decide what will work on their farm.

“Kip does myriad mini experiments,” Casteel says. “He dreams up various management scenarios and tests them. Those are all interesting and fun to experiment with, but you have to put it in light of what’s profitable.”

Tullis admits it’s hard to determine a return on investment for his efforts until he has more history on his production practices, but he’s determined to keep trying. “It’s become a bit of an obsession,” he admits with a laugh. “I want that 105 bu. again.”