Aimed upward to intersect the clouds of an approaching hail storm, these cannons emit thunderous blasts of compressed air which manufacturers claim reduce hail stones to a frosty slush.As it falls on orchards in late bloom or those with early developing fruit, it causes little or no damage. 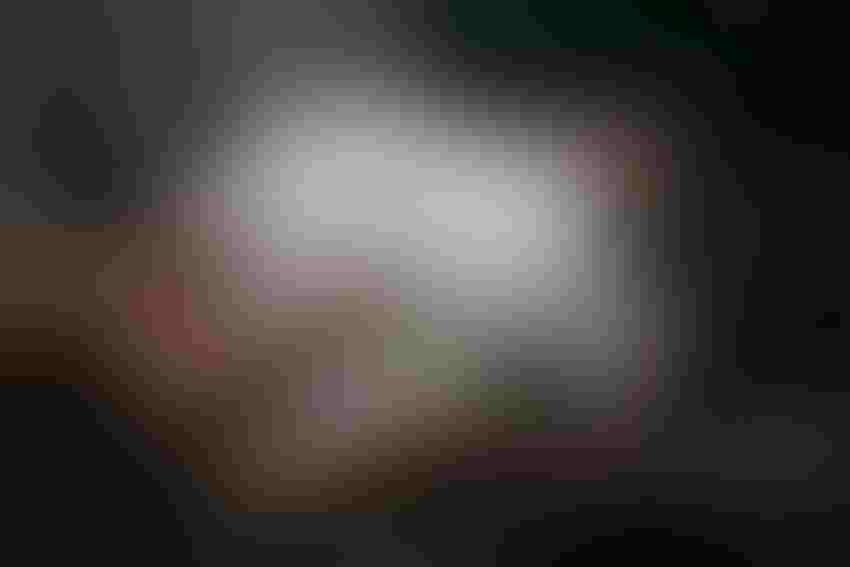 Although the use is centuries old, noisy hail cannons have been employed only recently by several Central California fruit growers as a possible defense against early spring hail storms. Neighbors hope quieter weapons can be found.

As it falls on orchards in late bloom or those with early developing fruit, it causes little or no damage. In contrast, fully developed hail stones, even small ones, cause ugly scarring that sends otherwise attractive fruit to the cull bin after harvest.

The missile of compressed air is created when a small quantity of acetylene gas metered into a chamber in the cannon’s breach is ignited by a spark supplied from a battery or other electrical source.

The result is an ear-splitting blast and an overwhelming rush of compressed air through the cannon’s mouth. Each blast travels hundreds of feet, hopefully far enough to reach the threatening clouds.

Uninitiated observers might suspect that war has broken out. With lightning often a feature of hail storms, the accompanying thunder coupled with the cannon’s blasts results in an impressive aerial acoustic display. It might be the Fourth of July, except that it’s February.

Most of the cannons used in fruit orchards and those shown in historical records feature barrels 10-20 feet long, as much as two feet across at the mouth, tapered from a smaller diameter at their breach.

Historical records say the blasts from cannons aimed horizontally easily knocked down advancing columns of the enemy, and their deafening roar caused advancing troops to cower and scatter.

Those earlier military uses had to forego the convenience of acetylene gas delivered by the local supplier, but explosive materials and ways to ignite them have been part of military operations for centuries. They were no less impressive - or effective - than today’s applications.

Use in Fresno, Tulare counties

Growers using the cannons and their representatives tend to be non-committal about the practice, and little if any information has been accumulated to document their effectiveness. Nevertheless, dozens can be found in the concentrated orchard areas of Fresno and Tulare counties.

Searching for them is best done by sound, not by sight, in full rain gear while a threatening hail storm advances all the while honoring trespass protocol.

The purchase and installation of a single cannon, solidly established on a concrete pad, fenced (possibly topped with razor wire), and accommodating storage for several acetylene bottles, represents an investment of $35,000 - $50,000.

For the latest on western agriculture, please check out Western Farm Press Daily and receive the latest news right to your inbox.

An investment of that scale, perhaps several times over for larger plantings or those in scattered locations, can only be justified by convincing results.

The primary source for most, if not all, cannons installed in Central California’s fruit growing empire is Mike Eggers, a manufacturer located in New Zealand. Apparently he maintains local representation on a seasonal or intermittent basis.

For those living near hail cannon installations, ear plugs are the best defense during the stormy season. Some neighboring small-scale growers are grateful for the residual benefit the cannons provide.

Others just live with and perhaps detest, even protest, the noise, sometimes an interruption of their sleep. Means to outfit their panicked pets with ear plugs haven’t been designed, and tranquilizers have limited effect.

Commercial growers know they have to resist threats to their crops, whether they arrive in the form of insects, disease, vandalism and thefts, water scarcity, or unfriendly weather. When hail is the enemy, there’s nothing like the overpowering blast from a hail cannon to provide satisfaction, and at least the hope of protection.