Names in the newsConservation & Sustainability

Ohio Conservation Farm Family: The Baltes family uses cover crops as much as possible on their 1,200-acre farming operation. 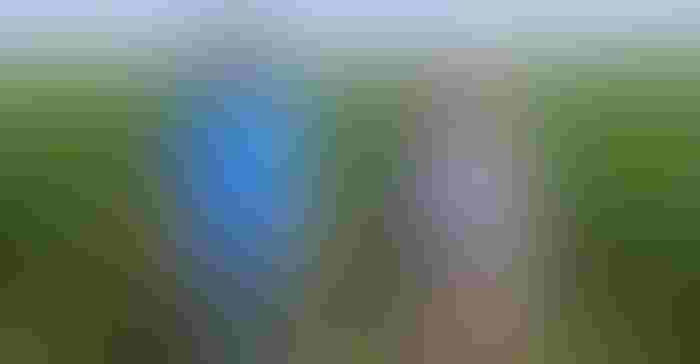 A North Jackson, Ohio, father-son team might be small in numbers, but they are mighty in the conservation practices they use on their farm.

Andrew Baltes and his son, A.J., have a long-standing working relationship with the Mahoning County Soil and Water Conservation District and the Natural Resources Conservation Service, implementing several conservation practices on 1,200 acres they are farming in North Jackson.

They grow corn, soybeans and wheat on a rotation, and plant cover crops as much as possible once crops are harvested.

A.J. likes a combination of rye, wheat, clover and buckwheat in his cover crops, while a 15- or 18-way mix is preferred after the wheat comes off. He got his start with cover crops not long after he graduated and started farming. He started using cover crops as a seed dealer, and as the industry has developed, he has found his niche in it.

“I’m excited to see what can be accomplished with the use of cover crops on our farm, and others in the future,” A.J. says.

He is the fourth generation to farm the land, and A.J. hopes his toddler, Luke, will be the fifth.

The conservation philosophy in the Baltes Farm is multigenerational. Early on, Andrew and his dad practiced as much conservation as possible — they no-tilled crops in when they were milking cattle.

The cattle are gone, but the desire to work with wildlife and conserve natural resources continues.

For their efforts, the Baltes family has been named a Ohio Conservation Farm Family for 2022.

Constructing his original wetland was a form of therapy for Andrew, as he was diagnosed with melanoma about six years ago. The disease has spread to his organs, but keeping active has helped him through the illness and setbacks. “It gave me a reason to get out of bed and stay active,” he says.

Andrew’s work to instill a conservation state of mind in A.J. appears to be working.

Andrew has been a member of the Ohio Farm Bureau for more than 30 years, while A.J. currently serves as vice president of the Mahoning County Farm Bureau, while also serving as secretary of the Mahoning Soil and Water Conservation Board. The Balteses have participated in MCFB’s community breakfast and “drive-it-yourself” tours, being one of the county’s three farms open to the public.

Andrew and A.J. develop, grow and sell seed mixes to their fellow producers. According to Kathleen Vrable-Bryan, district administrator at Mahoning SWCD, the family has sparked such an interest that many organizations around Mahoning County were anxious to learn how they could create their own pollinator plots to benefit the agricultural and food production community.

The family has also added a sunflower plot that creates a revenue stream for the farm with photographers renting it for photo shoots.

The Balteses have opened up their farm for OSU Extension educational meetings, field walks and tours. “They are always willing to share their continued growth of knowledge in the farming industry,” Vrable-Bryan says. “You can always find Andrew in the hay and grain building sharing his passion for farming with the 250,000 people who attend the Canfield Fair every year.”

Now, the Baltes family is working to put in a 3-acre wetland at the back of the farm after their pollinator plots. In addition, every field on the farm is tiled.

“A lot of it I’ve never seen before,” he says. “They are moving into the wetlands, and we will probably move to nesting boxes for the birds in the future.”

Another conservation practice they use is to delay mowing pastures or large areas until July or August so that fawns and young ducklings are not disturbed.

The Balteses know how important soil is to their farming operation, but they also know water is equally important. Soil samples are drawn every other year, helping them to apply only what the soil calls for while reducing fertilizer expenses.

The Balteses are excited about the future. They can’t wait to finish their second wetland project, which will be a total of 15 acres on the farm.

It will include two separate wetland ponds with the help of Environmental Quality Incentives Program funding from NRCS and SWCD. They will install a water control structure, which will help with the growth of cattails and allow the Balteses to mow around it when necessary. On the other hand, it will allow them to flood it back for the duck population.

In 10 years, their goal is to get away from synthetic fertilizer and cut down on chemicals used on the fields. Another goal is to figure out how to use cover crops on every acre.

The Balteses have already started using biological inputs in front of the wheat production and a little on corn. They are hoping to cut down on the amount of spraying they have to do because of the cover crops building the soil up quickly.

Other goals include constructing waterways on rented ground to stop the soil from washing away.

“Agriculture runs deep in this family, and they readily share their knowledge and support other farmers,” Vrable-Bryan says.

The family: Andrew and A.J. Baltes farm together in North Jackson, Ohio. A.J. is the fourth generation, and he has a toddler, Luke, with his girlfriend, Ashley Pitorak.

The farm: The Baltes family farms 1,200 acres in Mahoning County, using a corn, soybean and wheat rotation. They use cover crops on every acre they can in their operation, including interseeding cover crops into their corn and planting pollinator plots on their farm. There is one major pollinator plot that ranges from 6-8 acres. It contains sunflowers, clovers, wheat, buckwheat and other flowering plants. They also have a forestry management plan for 20 acres on their farm.

Outreach and education: Andrew and A.J. Baltes have long worked with the Mahoning County SWCD and NRCS. They are currently working on a 15-acre wetland restoration project. Before joining the SWCD board, the Balteses worked with SWCD to demonstrate their pollinator plots. They participate in an outreach campaign to include billboards to educate the public on the importance of pollinator plots. Andrew and A.J. develop, grow and sell seed mixes to their fellow producers.

Community outreach/leadership: Andrew Baltes has been a member of the Ohio Farm Bureau for more than 30 years. A.J. serves as vice president of the Mahoning County Farm Bureau board and is also the secretary of the Mahoning SWCD board. The Balteses have participated in Mahoning County Farm Bureau’s community breakfast and “drive-it-yourself” tours. They have also opened their farm to OSU Extension for educational meetings, field walks and tours.