Patchwork Pumpkin Patch is small, but it has grown a big following. 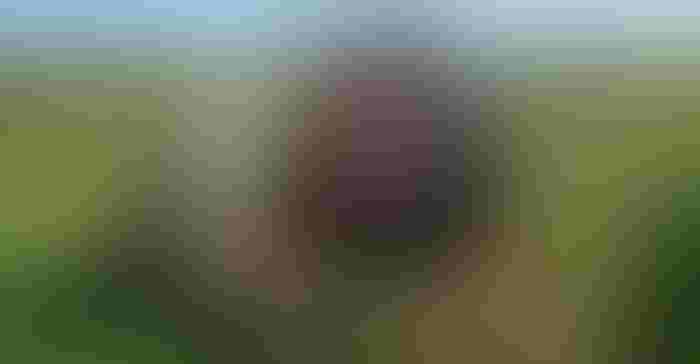 Corn and soybeans may get most of the attention this time of year, but when it comes to attracting people to the farm, pumpkins are king.

Patrick and Kristy Mitchell realized this on their many visits to Kristy’s uncle’s farm in Colorado. For 10 years, her uncle ran a pumpkin patch that attracted thousands of people each year. So, in 2018, they decided to buy their own farm and try growing a pumpkin patch themselves.

The first two weekends of October are the busiest at Patchwork Pumpkin Patch in Grantville, Pa. Thousands of people will be come to Patrick and Kristy’s 1.5-acre pumpkin farm to get immersed in farming, even if it’s just for an hour or two.

For Patrick, who was a banker and later got into information technology, opening the pumpkin patch was a throwback to his childhood in upstate New York, where he spent summers helping on his grandfather’s dairy farm.

The couple own 23 acres, but most of the land is leased to a neighboring dairy farmer who grows corn, soybeans and hay. The small patch the couple kept for themselves had hay and other crops growing on it when they bought it. They spent nine months clearing ground; applying fertilizer; and putting in fencing, outbuildings and a new pole barn before opening to the public.

All pumpkins are pick your own, and there are many other activities for families to enjoy. School trips are done on Tuesdays and Thursdays. The couple grow several varieties, including regular carver pumpkins, 5- to 7-pound orange pumpkins, white pumpkins and minis. All these are for decorations or for Halloween carving. They also sell straw bales and cornstalks.

With no experience farming, Patrick says that he leaned heavily on other farmers and Cooperative Extension to learn the ins and outs of growing pumpkins, including soil testing, and herbicide and pesticide usage. He attends the annual Mid-Atlantic Fruit and Vegetable Convention in nearby Hershey to get better educated on growing the crop.

Running an agritourism operation has its advantages and challenges. On a good weekend in fall, the farm attracts more than 1,000 people.

“It is very busy, but only for a brief period of time,” Patrick says. “So it pays for the farm, but then we have other time to ourselves to devote to our kids and our day jobs.”

October is the busiest time for customers, but the work is year-round. Kristy says she and her husband will start thinking of new ideas and activities for next year right after all the pumpkins are picked and the cold weather sets in.

In November, the plot is cleared of pumpkins and, depending on the needs of the dairy farmer, either a winter wheat is planted, or the land is kept fallow until next spring. Nothing happens until June, and then around Father’s Day, the couple — along with family and friends — start prepping the pumpkin field by tilling, adding fertilizer and then planting. This spring, they planted 2,000 seeds by hand.

The patch is drip irrigated, which presents challenges, Patrick says, because they rotate the patch each year and move the drip tape with it. The irrigation is crucial, though, especially during dry years such as this season.

The pumpkins have, for the most part, done well, Patrick says. The irrigation, plus plenty of rain in spring, ensured a good first fruit set. The first set is crucial as this fruit has the strongest stems. Subsequent fruit sets help fill out the patch.

But then it got dry, and even though the patch was irrigated, subsequent fruit sets didn’t do as well. Rain finally returned in August. but it’s likely too late for much of the second and third fruit sets.

“If you don’t get enough water, you can get very spotty coverage,” Patrick says. “We have had plants with no fruit at all.”

They do little advertising except for word of mouth and some social media ads, and most of that work the couple does themselves.

“We hear every week someone say that we didn’t even know you were here, so reaching everyone can be challenging,” Kristy says.

Since they don’t farm full time, the Mitchells have leaned heavily on other farmers, especially the dairy farmer they lease most of their land to.

“I leaned heavily on him just for his knowledge because he has leased this land from the other owners back into the ’90s, and so he knows this land well and does soil tests every year,” Patrick says, adding that the farmer has larger equipment he can borrow for fieldwork if needed.

Keeping that line of communication open is crucial for many reasons. For example, the farmer had stunted corn this year from the drought. Instead of combining it, he came up with the idea of selling the cornstalks as bundles at the pumpkin patch. Kristy and Patrick loved the idea, and the bundles have been a popular sell.

“I talk to him once a week during the season,” Patrick says. “Just keeping the line of communication open about what he’s expecting and what we’re expecting.”

Other farms, especially those that sell wholesale, are important, too, he says, as they provide a market for pumpkins that haven’t sold. There are also local auctions nearby, but these can be unpredictable, he says, as the price can vary greatly from week to week.

South-central Pennsylvania is known for its many agritourism options. The competition can be fierce, but Patrick thinks it’s a plus.

“We tried to pick a niche and move into that, and we found that works because we found, talking to people that visit, they’ll do several different things every weekend,” he says. “They’ll go to one or two or three different places. We’re not directly competing with them because the public wants to go to all these places, and they will go to all of them.”

No two years are the same on this small pumpkin patch. The work is hard, and the season can be unpredictable.

“That why we’re going agritourism instead of straight agriculture, because we’re not farmers,” Kristy says.

Patrick says that he has rediscovered his farming roots, and it’s made him appreciate the hard work that goes into growing a crop, even if it’s only 1.5 acres.

“I think it's finding the balance of working hard on the farm, but also maintaining social media and customer relationships," he says. “And it's also weather dependent. We are only open not that many days in a year, and you never know the weather you’ll get. Each year, we figure to lose two weekends due to weather. Between learning to grow the pumpkins, setting up the events, and just maintaining the larger equipment, it's been a lot."

Starting a pumpkin patch, corn maze or any other farm business that invites members of the public out to the farm falls in the realm of agritainment, or agritourism.

The Agricultural Marketing Resource Center (agMRC) states that based on USDA’s definition of agritourism, the industry grew by more than 67% between 2007 and 2017. The 2017 Census of Agriculture showed more 28,500 farms offering agritourism and recreational services.

There’s lots of potential advantages, but also pitfalls, to having people out on the farm.

On its website, the center lists seven best management practices to think about when considering opening an agritourism venture:

Check out other extensive resources on the center’s website at agmrc.org.