The Felix Roy family and Oklahoma State University commemorate Oklahoma King, a Duroc described in 1922 by The Duroc Journal as "the best barrow in the world." 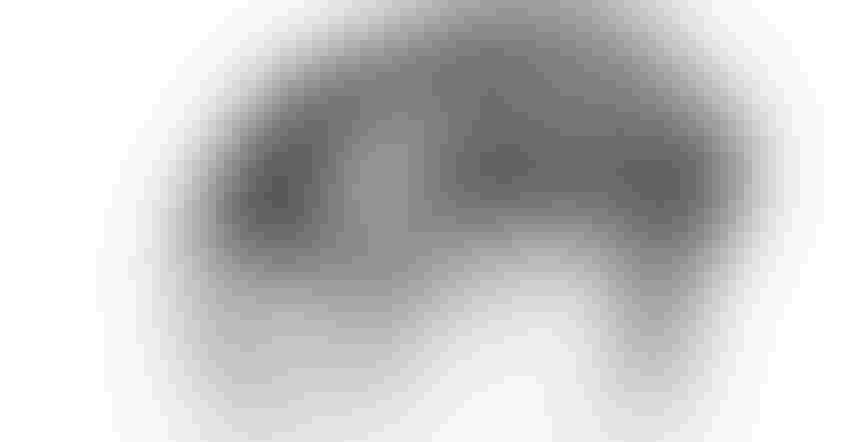 Oklahoma King was exhibited at the International Livestock Show in 1922 by 21-year-old Felix Roy. The hog was sired by Pathrion King out of the dam Nell Orion at the Oklahoma State University swine farm.

This fall marks the centennial crowning of Oklahoma King, a progeny of Oklahoma State University’s purebred Duroc operation that was declared Grand Champion Barrow at the 1922 International Livestock Show.

At 14 months old and weighing in at 550 pounds, The Duroc Journal reported that Oklahoma King reigned the land: “In competition with all breeds and when the smoke cleared away, he was given the purple (ribbon) as being the best barrow in the world.”

A century ago, when the international show was held in Chicago, Oklahoma King was praised for his superiority of the Duroc breed, and OSU swine herdsmen Felix Roy established himself as one of the most skilled and knowledgeable swine nutrition experts in the country.

In a 1922 edition of The Duroc Digest, Oklahoma King and the duroc breed were raved about: “Red hogs will take hogs of any and all other colors to a cleaning right along. But when this Duroc barrow of unsurpassed conformation and finish carried off the premier honor at this greatest of livestock shows, there was recorded the absolute and undisputed proof of the value and effectiveness of Pig Club Work.”

The writer’s reference to Pig Club represented one of the many commodity clubs in the U.S., a precursor to today’s 4-H Youth Development organization. Roy was 21 at the time of Oklahoma King’s fame. Although he passed away in 1992, he left an extensive autobiography for his family to read and share.

The Roy clan was originally from Indiana and relocated to Enid in 1905. Roy wrote in his autobiography that at age five, he remembers his father searching for part-time work and a farm where the family could settle. It was two years before Oklahoma statehood and a few months after the Oklahoma land run. His father purchased land in the Yukon area, eventually raising chickens, purebred Duroc hogs and a few Shorthorn cows.

When a county Extension agent visited the farm one day, Roy was recruited to join the Pig Club. He began showing hogs at the county and state fairs, recounting the challenging experience as “a new era of responsibility … because we were asked to keep a current record of the amount of feed and costs of the project through the year. We also had to record our show winnings and sales returns,” Roy said.

He also competed in livestock judging contests, explaining how the activity helped prepare him for his future.

“The personnel with the Oklahoma State University Extension Service is due much credit for the devoted time, work and training they gave to thousands of boys and girls,” Roy said.

In 1920, OSU (then Oklahoma A&M College) hired Roy to manage the school’s swine herd, and he helped OSU win Duroc breed honors at the International Livestock Show in 1920 and 1921. Following his supreme win with Oklahoma King in 1922, Felix resigned from his OSU position to partner with his older brother in another swine operation. The Duroc Journal reported Oklahoma King was sold for $36 per hundredweight and was exhibited for educational purposes.

The Duroc Journal reflected on Roy’s win and Oklahoma King with these words: “Tenacity of purpose and determination are grounded into these boys in their club work. How thankful should we in the Duroc breed be that t­­his boy joined a pig club and through it, decided on breeding Durocs as his life work. All around us on our farms today are countless thousands of Felix Roys. Diamonds in the rough they are, waiting only the opportunity that will develop their latent talents.”

Roy spent the rest of his life in Oklahoma and had five children with his first wife, Agnes. He accepted a position with the new Oklahoma Rural Rehabilitation Corporation in 1935 and retired from the agency in 1965. After Agnes’ death from a severe illness in 1952, Roy later remarried to a woman named Helen and welcomed her son, John, to the family.

Since his days as OSU swine herdsman, the Roy family has celebrated 38 family members graduating from OSU. The legacy of this champion showman and the great Oklahoma King live on.

“Felix was indeed a soft spoken and gentle man but firm in his convictions and very strong in his work ethic, which he passed on to his family,” said Larry Roy, the patriarch’s oldest grandson. “I remember him telling us kids that we should give a good day’s work for a day’s pay, and that you can learn a lot if you just listen.”

“We learned to apply our best effort in our work at all times from him,” Steven Felix Roy said. “He told us of leaving school in the third grade to help on the farm. Being part of the Pig Club were some of the best days of his life. All things revolved around hard work with him or so it seemed.”

Roy wrote: “It may appear that I was overworked in my youth and teenage years. This is not the case at all. Those were the years I learned how to work, manage, assume responsibility for my future and work with people.”

He concluded his autobiography with, “The key to a useful life is the application of proper judgement and faith in action for the well-being of all mankind.”

Happy 100 years to Oklahoma King’s grand exhibition for OSU Agriculture and the legend of the man who made it possible.