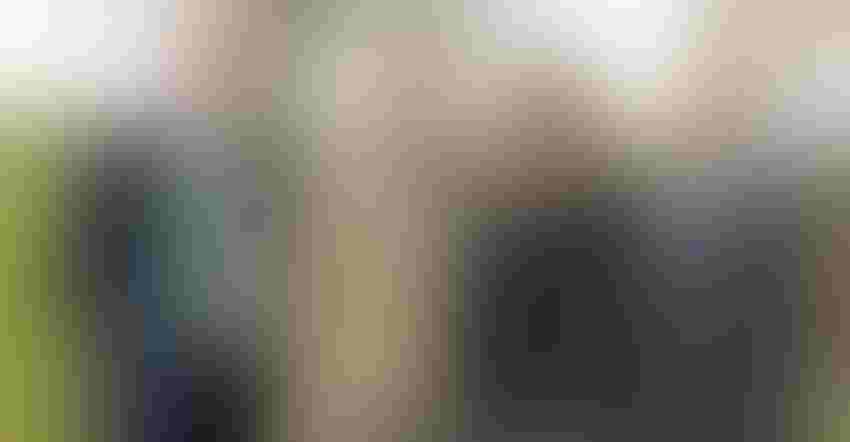 The award honors Wisconsin landowner achievement in voluntary stewardship and management of natural resources. The announcement was made during a recent meeting of the Wisconsin Department of Agriculture, Trade and Consumer Protection board in Madison.

Brooks Farms received the award at the Wisconsin Farm Bureau Federation annual meeting held in Wisconsin Dells in December. The Brooks family was presented a crystal depicting Aldo Leopold and $10,000.

Brooks Farms is a 1,600-acre, vertically integrated dairy and crop farm in Waupaca owned and managed by Ron Brooks and his daughters, Zoey, Syndey, Alyssa and Kelsey. The dairy is currently undergoing a significant expansion from 250 cows to 650 cows, with plans to expand more in the future. Their herd expansion will allow them to take advantage of economy of scale, giving them the ability to invest in manure separation and a wastewater treatment plant.

"We've been planning this expansion for two years," says Zoey, who served as Alice in Dairyland in 2014.

"We are growing our herd from within. We have had a closed herd since the 1980s. We have been breeding all gender select. Our numbers show us we will be able to get close to that 600-cow mark in the next three years."

Depending on the year and weather conditions, 70% to 80% of their cropland is no-till. The land undergoes a 10-year crop rotation among oats, alfalfa, corn, soybeans and wheat. Throughout the 10-year rotation, the fields are only tilled twice, with heavy consideration of slope and erosion potential. Earthworms thrive in their reduced-tillage fields, indicating a healthy soil biosphere and creating channels to allow for the infiltration of water.

The Brooks family says they are honored to win this award. "Dad and I were very excited," Zoey says. "The whole family is."

Given in honor of renowned conservationist Aldo Leopold, the Leopold Conservation Award recognizes extraordinary achievement in voluntary conservation. It inspires other landowners through these examples and provides a visible forum where farmers, ranchers and other private landowners are recognized as conservation leaders. In his influential 1949 book, "A Sand County Almanac," Leopold called for an ethical relationship between people and the land they own and manage, which he called “an evolutionary possibility and an ecological necessity.”

“Wisconsin’s dairy farmers are proud to have one of their own receiving this prestigious award — a symbol of the conservation work being done by farmers every day,” says Patrick Geoghegan, Wisconsin Milk Marketing Board senior vice president of corporate communications.