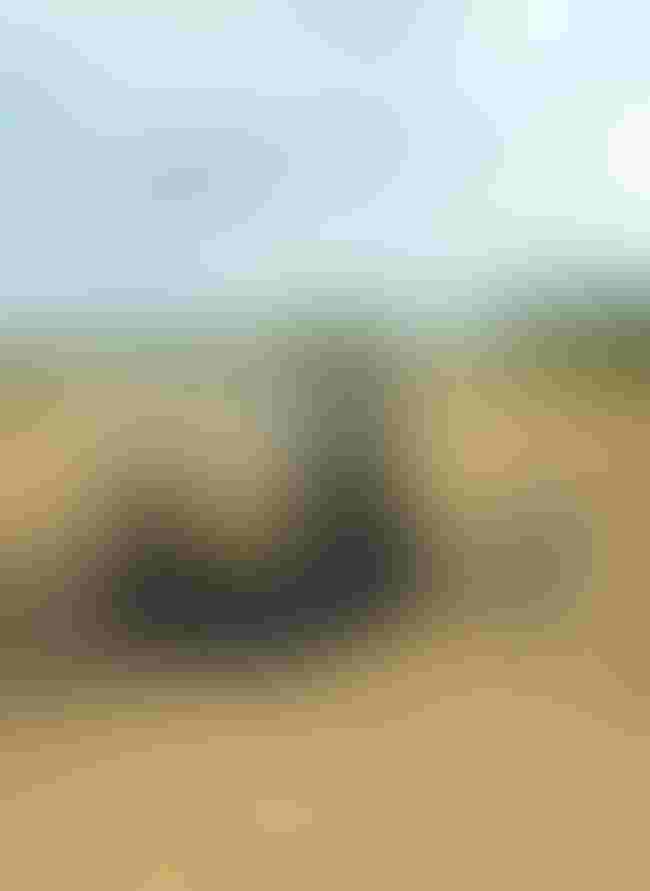 The prototype Spirit autonomous tractor introduced at the Big Iron Farm Show in West Fargo, ND in September throws convention—and the need for a driver—aside, with a look more reminiscent of a rectangular rubber-tracked gold LEGO block than a modern tractor. According to Spirit designer Terry Anderson, president of Autonomous Tractor Corporation, it’s the look of the future.

“When we started studying tractor design 13 or 14 years ago, we concluded that not much has changed over the years except that everything has gotten bigger and more elegant,” says Anderson, an entrepreneur with a background in communications technology, industrial machine design and manufacturing.

Compared to traditional tractors, the biggest missing element in the Spirit design is the tractor cab. “My view is that an environmentally controlled penthouse is just too expensive to consider on an autonomous tractor,” Anderson says.

The company’s design goal was to build a low-cost, efficient, reliable tractor with a fail-safe no-driver navigation system. Spirit will have a long, 25,000-hr. service life, a 500-hr. service interval, a maximum 2-hr. repair time and a selling price of $500 per horsepower, Anderson says. That includes a hybrid laser-radio navigation system that eliminates the possibility of the tractor straying outside of field boundaries.

The Spirit tractor borrows design elements from railroad locomotives, including a tubular steel frame and a diesel-electric power plant that eliminates the need for a transmission and differentials. Power is supplied by twin 202-hp, 5.2-liter Isuzu diesel engines, which drive dual generators that provide power to four oil-cooled electric wheel motors. Depending on power needs, the dual-diesel configuration can be run at drawbar horsepower ratings ranging from 100 to 400 hp in 100-hp increments.

Power is transferred to rubber tracks via powered truck tires on each corner, which Anderson says provide more surface area than traditional track systems. The weight of the tractor —25,000 lbs.—was kept low to minimize soil compaction. An additional 5,000 lbs. of weight can be added by ballasting the tubular frame with water.

Anderson opted for a laser and radio navigation system instead of a GPS-based system because of reliability concerns. “We decided GPS is not satisfactory for an autonomous tractor because GPS can fade periodically,” he says. The Spirit navigation system uses two lasers mounted on the tractor, which bounce signals from three or four mobile transponders placed around the field. Lasers are supplemented with 150 MHz radios, which are needed to overcome line-of-sight issues with laser systems.

Eventually, Spirit tractors will be sold factory-direct, initially from a factory to be built in Fargo. For 2013, Anderson hopes to build up to 25 Spirit tractors for field testing within a 100-mile radius of Fargo.